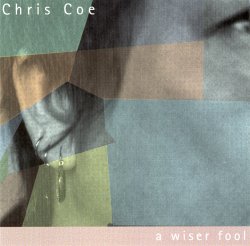 When I first began to frequent folk clubs, back in the late seventies, Pete and Chris Coe were among the top acts.  At the same time, they were members of the tragically short-lived Bandoggs, and of the hugely influential dance band, the New Victory Band.  Since then, if Chris Coe has not had quite such a high profile on the folk scene, she certainly hasn't been inactive, working with bands such as Hooke's Law, and latterly as part of the Ryburn 3 Step project.  This however, is as far as I'm aware, her first solo record.

Let me say straightaway that if you like what Chris Coe does, you'll almost certainly enjoy this CD.  I can imagine that a lot of people might not like her voice - a bit of an acquired taste perhaps - but I've always held it in high regard.  And here it's used to great effect on a very strong selection of songs - including what I remember Martin Simpson once describing as some "pretty heavy duty ballads".  There's an unaccompanied False Foodrage and Geordie, there's also versions of Edward, Hind Horn and Love Heneree (Young Hunting) ... meaty stuff!  In all cases, Chris shows great expertise at getting the story across, and the accompaniments are an object lesson in how good musicians can provide a simple yet effective backing to traditional songs.

Perhaps most effective are Chris's own appalachian dulcimer accompaniments to Love Heneree (from Frank Profitt) and, my favourite,

On the minus side, I have to confess that the handful of self-composed songs didn't do much for me (with the exception of the closing number, Longing: I could imagine this being taken up and learned by other singers).  I wasn't taken either with the percussion accompaniment to Redesdale and Wise William, although it's a good reconstruction of a song.  Also, at 64 minutes, this CD is perhaps too long to want to listen to all the way through - there was a lot to be said for the old 45 minute LP! - but taken in two sittings it's fine.

I've concentrated on the vocal items so far, although there are some instrumentals too: some nifty hammer dulcimer work from Chris on a couple of tune sets, and some rather solemn duet concertina on another couple.  But it's definitely the songs that steal the show.  In the current fRoots, and in Mojo too, you can find Colin Irwin waxing enthusiastic about this CD, and stating that younger singers could learn a lot from Chris Coe's passionate and full-blooded singing style.  Reluctant though I usually am to agree with Colin Irwin, I have to say that he has a point.  I'll add a rider though, and one which I think Chris Coe herself would endorse: when you've listened to her singing these songs, go back and listen to the people she learned them from, to George Dunn and all the other traditional singers, from whom you can learn much more than just the words and the tune.