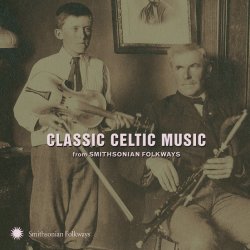 Had this compilation appeared half a century ago, it would have been highly praised - though this would actually have been impossible, since nine of the tracks date from a little after 1963.  What I mean is that it's the sort of record which could easily have been published back then ... and, aside from its digital medium which didn't appear until 1982, not much seems to have changed.

It really does seem extraordinary that one of the world's great folk record companies can publish a CD in 2013 titled Classic Celtic Music, containing tracks by Harry Cox, Shirley Collins, Willie Taylor, Billy Pigg, etc.  I know that a significant proportion of the American population can't point to their own country, let alone any others, on a world map - but you'd think that Smithsonian Folkways ought to be able to do a little better than this.  The 40-page booklet is not much better - the so-called 'research' done by compiler Richard Carlin appears to have been little more than a cut'n'paste job from the sleevenotes of the various Sixties LPs whose tracks have been assembled here.  And there's a truly 'classic' bloomer on page 8 - a full-page photo of Jean Ritchie recording Mr Rew, playing his concertina, during her field trip in Ireland!  (to clarify, Mr Rew was from Sidbury in Devon - add him to the list of non-Celts - and, as you can see from the above track listing, doesn't appear anywhere on the CD.)

You could argue that it's unreasonable to expect Americans to know anything about this stuff ... maybe, but then they should have consulted an expert in the field - mercifully, Peter Kennedy is no longer the expert of choice in this area - so they asked one L E McCulloch PhD, who doesn't seem to have been much better!  The Credits cite two Executive Producers, a Production Manager, an Editorial Assistant and a further 17 named members of the Smithsonian Folkways staff - surely one of them should have noticed these glaring errors?  This really isn't good enough for the 21st century!

Let's hope that the 20th century music and song is rather better.  And, of course, it is.  Though, to be honest, there's not a lot to get terribly excited about - we get pretty-much the tracks you would expect from Sarah Makem, Joe Heaney, Shirley Collins, Michael Gorman and Margaret Barry, Denis Murphy, Isla Cameron, Louis Killen, Harry Cox, Jean Carignan, and Ewan MacColl.  So, nothing that someone interested in this music wouldn't already own.  There are, thankfully, some good but less well-known items in the mix: Billy Pigg's Border Spirit, Bob [sic] Hobkirk's De’il Among the Tailors, Pat O’Malley and Frank Keating's Whiskey Island Polka, and Joe Shannon and John McGreevy's Derry Hornpipe.  And it's great to hear Lucy Stewart singing Tifty’s Annie, a track I'd not had the privilege of hearing before.  On the other hand, Margaret Dirrane's ’Twas Early, Early in the Spring isn't really good enough for this compilation, and the usually exemplary Willie Clancy makes a hideous job of trying to play a simple romantic ditty, Trip O’er the Mountain, as a highly [over]ornamented slow air.

Sadly, we haven't had all the mistakes yet: Willie Taylor's The Pearl Wedding / Nancy Taylor's Reel is a delight - though Pearl Wedding is the second tune, not the first.  On track 12, Patrick Clancy (one of the Brothers) sings The Bonny Bunch of Roses not terribly convincingly.  Even less convincing is the statement in the song Notes that this is 'one of the greatest of Irish traditional ballads', despite it having been written by an Englishman, one George Brown, a prolific hack writer in the London broadside trade, who borrowed several lines from the Irish broadside ballad The New Bunch of Rushes.  Further, the song Notes describe Harry Cox's singing of The Young Sailor Cut Down in His Prime as 'finely ornamented',  Well, to my ears, it's the classic declamatory East Anglian style - not an ornamentation in sight.

Finally, the MacColl track is worthy of mention.  Back in the Sixties I heard MacColl sing at the Singer's Club most weeks for about two and a half years, and can confirm that he was often a very good ballad singer.  But I never heard him sing a very convincing Glenlogie - and this one doesn't change my opinion.  But, again, it was the song Notes that caught my eye, where Glenlogie is described as 'a classic story of a well-to-do maiden falling in love with a lower class man' ...  "He's o the grand Gordons, and his name is Lord John" - a lower class man?  No, Glenlogie tells Jeannie "Your tocher's o'er smaa" - or, more usually "I'm promised awaa".  Don't they even listen to this stuff before they publish it?

Smithsonian Folkways is proud to advertise itself as a not-for-profit organisation ... unsurprising when this is the quality of work they produce.  MT Records is likewise unprofitable, but at least I make an effort!