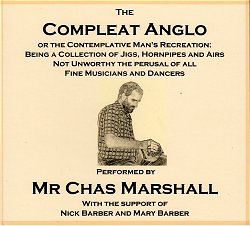 Lots of nice tunes, nicely played - what more could one ask?  Well, I suppose an MT review requires a little more than that - so:

Firstly, it's only fair to say at the outset, that this is an entirely revivalist CD; most of the tunes were learned from revivalist players, or from books.  At least, I think that's the case, given that the tune notes are extremely brief - but here's what they tell us, with my few comments shown in italics:

Track 1 - is from the playing of the marvellous Brian Peters.

Track 2 - was learned from Chas' melodeon-playing friend Heather Hazell.  The music notation can be found in Sweet and Salt Water by Jack's daughter Margaret Watchorn.

Track 3 - Chas heard this tune on the CD Mouth Organ by Will Atkinson, and later found himself sitting next to an Anglo concertina player who turned out to be Pippa Sandford - so he learned the tune as a result of meeting her, and now uses it for Clogarhythm's Lancashire Irish steps.  Hardly surprising, I would say, as it sound far more Irish than Norhumbrian.

Track 6 - A M Shinny was composed by Scottish fiddler Angus Fitchet, better known for J B Milne.  Shetland Boston is to be found in the Community Dances Manual.

Track 7 - learned at a workshop at Gleanings in Shropshire run by Mary Humphreys and Anahata.

Track 8 - this lovely waltz, composed by New Mexican David Margolis, emerged from the Stroud music session some years ago, and was learned from the fiddle playing of Taz Tarry.

Track 9 - composed by Dave Whetstone, this tune can be heard on the Grandson of Morris On CD.

Track 10 - both these tunes were written by Nick Barber after musical expeditions to North Yorkshire.  Trip to Ferrensby was on the occasion of Chas and Viv's wedding in April 2013.

Track 11 - an unusual pairing of tunes, but it seems to work!

Track 12 - from the tunebooks of the prolific fiddle player and composer, James Hill, though he composed neither tune.  Roslin Castle is probably of Scottish origin, and The Rights of Man probably Irish.  While I have no objection to either tune, I find it hard to understand this track's inclusion on a CD entitled The Complete Anglo, when it's played, solo, on the fiddle by Mary Barber!  Played well, I should add.

Track 14 - published by Sue Harris and John Kirkpatrick in their book Opus Pocus.

So, what is there to add?  Mr Chas Marshall plays his D/G Wheatstone Linota very well, never too fast, and with a nice bounce, and the selection of tunes is good - and includes a number I'd never heard before.  Well worth acquiring via Nick Barber's website at: http://nickbarber.net/