Songs from the Company of The Butley Oyster

A fact not noted in the insert notes to this CD is that it probably wouldn't have existed at all had Neil Lanham not kindly agreed to let me have access to his recordings when I was compiling the MT record of Cyril Poacher.  As it was, I edited and then got Paul Marsh to clean up all Neil's CP tracks, and subsequently sent him a CD-R of them.  He then contacted Paul, who kindly agreed to collaborate with him in the production of this present publication.

What we have here is the songs (or some of the songs?) which were sung in Butley Oyster during two evenings in the winter of 1967/68, plus an additional three songs from Bob Hart, recorded in the singer's home. 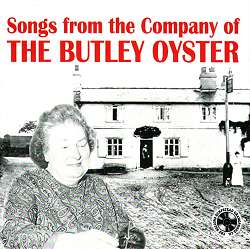 There is no booklet as such, but a fold-out cover insert provides three sides of text.  Unfortunately, in my view, the vast majority of this space is spent on the subject of Neil Lanham himself and his views on the songs and the society which supported them.  These views can be summed-up as: things ain't what they used to be when I were a boy-chap; city-folk don't have the 'background' to understand these songs; TV and radio ruined the 'old ways'; these academics reckon they know all about it, but 'that's only book knowledge'.

A little more 'book knowledge' on the author's part might have prevented several of the mistakes he has made.  He states '... one of these singers was to comment, when he was singing for 'folk' audiences, "I can't sing my own songs now.  They only want the funny ones".'  This is a slight misquotation from Bob Hart, from the MT double CD's booklet, where he is complaining that the audiences in his own local pubs "only want the funny ones" now! [1969].  Lanham has completely missed the point that Bob, among several others, was very pleased to find that an attentive audience for his more serious songs could be found at Leiston and other folk clubs - where he went many times.  Lanham also comments that these recordings are interesting because they come from 'a time when there were only local people present'.  This is palpable nonsense!  My wife and I, Tony Engle and Peta Webb, Dave Nuttall, Chris Morley and all his band, a host of people from the local folk clubs ... were present at practically every song or music session in the area at that time.  Of the singers heard on the CD, Bob Hart, Percy Webb, Jumbo Brightwell and Clarence could hardly be called 'locals', and certainly weren't 'regulars' at Butley in the late '60s.  Interestingly, some of them were in the '70s, when a folk club started up in the Oyster!

While describing the sort of songs with which some of the people in these East Suffolk villages entertained themselves, he writes of the songs 'arriving in the community perhaps 50 years ago, some 100, 200, 300 or, in the case of The False Knight, probably more than 500, then having been passed down as stories from father to son or such without ever becoming 'an ink stain on a piece of paper''.  It's possible, I grant you, but - in the light of the textual similarity between them and printed broadside versions - pretty unlikely.  This is just the sort of unsubstantiated nonsense that was being peddled 50 years ago by the likes of Peter Kennedy - and is still to be found on the shelves of Past Times shops.

I think it's a shame that Neil Lanham felt the need to take up so much of the meagre notes airing his prejudices, rather than telling us something of the singers he so obviously admires.  When he does mention them, we get just four sentences on Jumbo Brightwell, one each for Bob Hart, Revett Branch, Cis Ellis and Percy Webb, while Clarence (whose surname was not known) gets two.  Not a lot, one might think!  One 'Tinga' Ling, who sings Seven Drunken Nights is not mentioned at all.  A pity, this - since 'Tinga' was (obviously) a generic nickname for all the Lings at one time or another - and it would have been a courtesy, at the very least, to be told exactly who he was.  Since Bob and Percy were in the company, it could well have been their close friend Percy Ling, from Snape, or maybe Fred, Geoff or George from Blaxhall - though it sounds most like Percy, to me.  Lanham does mention the Oyster's landlady, Vera Noble - and rightly so, since the song and music sessions then, as now, are only possible when supported by a sympathetic licensee who encourages a company who'll give good order for a song.  Her photo appears on the cover, above.

All the singers on the CD have now been mentioned, so let's see what they sing.  We start and finish with Bob Hart - something of an unusual choice, since Bob was neither a local nor a regular, and the first three tracks are not 'Songs from the Company of The Butley Oyster', but were recorded at his home on another occasion.  He'd only been singing in the pubs for a year or so at this time, so it's odd that he should have been so prominently featured on this CD.  Moreover, Bob was hardly the person to finish off an evening in a rousing manner, and his We Used to Gather at the Old Dun Cow, while short, amusing and with a good chorus, certainly doesn't bring the crowd to its feet.  He also sings John Barleycorn, Barbara Allen, Jack be Nimble, The Foggy Dew and The Dark Eyed Sailor - all beautifully.  In truth, he was one of the most consistently good singers it was ever my pleasure to hear.

Jumbo Brightwell follows Bob's first four songs with The Flower of London, a superb 5 minute performance of a fine song (sound clip).  Born in Little Glemham, living in Leiston and a regular at The Eel's Foot, almost 20 miles away by road, in Eastbridge, he could also hardly be called an Oyster 'local'.  He sings The Indian Lass, The Gamecock, Muddley Barracks, The Wreck of the Ramillies, Home Dearest Home and The False Knight later on the record, and all are excellent.  Like Bob, he seemed to sing in much the same way whatever the circumstances, though Lanham says that he 'hated to sing at home where performance can often be sterile'.  His Wreck of the Ramillies is sung much as his dad had it, and as I've heard him do it elsewhere - so I wonder where his arresting repeat of the first two lines in each verse (heard on the 1975 VotP track) suddenly came from?

Percy Webb, from Tunstall only a couple of miles away by a straight back-road, is the first nearly local singer, and gives us All Over Me, Nancy of Yarmouth, Rattling Old Grey Mare, The King of the Gypsies and A is for Anchor.  Percy was always very open and friendly to us outsiders and great company at a pub session.  He always seemed like a splendid and hugely energetic singer in these circumstances, but listening to the tapes later revealed disappointing performances.  His enthusiasm and personality carried the day 'in company', but I've never heard a really good recording of him.  Even his four songs on the Topic 'Flash Company' LP didn't really do him justice and nor, I'm afraid, do most of those on this CD - though his A is for Anchor gets close to the way he sounded, and would have made a far better closing track, in my opinion.

Revett Branch worked less than a mile up the road at Chillesford, but I don't know where he lived.

He was known as 'Rivetts' when we knew him; a great stepdancer, a good singer and possessor of an extra first verse to Flash Company.  Here he sings a lively Rap-a-Tap-Tap and a rather fine Newlyn Town (sound clip).  I would guess he is a generation younger than the other singers heard here.

Clarence was a friend of Bob Hart's from Gromford, which is right next-door to Snape.  He sings Souvla Bay, quite beautifully - with none of the drawn-out, overblown emotion which this song so often attracts from older singers these days.  He also plays a neat mouthorgan on Jack's a Lad - but only for about 7 seconds, at which point the track stops abruptly!  Still, it's great to hear him again, after all these years.

The notes tell us that Cis Ellis was a 'marshman' who kept cattle on the marsh for Sir Peter Greenwell.

He's not a singer I've ever heard (or heard of) before, and he provides only The Bold Princess Royal here.  It's a good performance with a repeated last line (sound clip), and it's a shame that the crowd wasn't prepared to give him somewhat better order.

The unspecified Mr Ling sings Seven Drunken Nights in a typically (if it is indeed Percy) chaotic manner, with the whole company enjoying themselves enormously - which is exactly what these evenings, and this record, is all about.  This is another performance which would have made a very good closing track.

When Neil Lanham told me about these 'evenings at a pub' CDs he was planning (further volumes from Snape Crown and The Eel's Foot are in the pipeline), I had the impression that they were intended to be just that - a record of what happened at a particular place and time, with all the natural internal dynamics that such an event will produce.  I though that sounded like a pretty good idea.  But what we have here is a selection of 22 songs from two different evenings, plus 3 others, assembled in an order which seems not to have any logic to it (or maybe it's just the order they were on Paul's CD-R of cleaned-up tracks).  The differing background noise levels make it fairly clear that this was not the order in which they were actually sung.  There's nothing intrinsically wrong with this approach, but I would have thought that if the intention was to provide a more 'listenable' compilation by this means, then more thought should have been given to the ordering of the songs and more care to the editing of the tracks.  The result is an uneasy mixture of the two approaches, which I find ultimately rather unsatisfying.

This is not to deny some damned fine singing from most of the participants, nor to suggest that this CD is not a very worthwhile purchase.  It's good to see more and more of this material which has lain dormant for thirty years or so, finally being made available to its tiny - though appreciative - audience.  It's a terrible shame that the technology which makes it all possible wasn't available in the 1970s when there really were a lot of people who would have eagerly bought it.

'Songs from the Company of The Butley Oyster' can be obtained directly from Neil Lanham at: Ivy Todd, Hellions Bumpstead, Nr Haverhill, Suffolk CB9 7AT.  Tel: 01440 730414.