Music at the House

An American CD of Irish music - Brendan Bulger is a Boston-born fiddler, Marty Fahey is a box player from Chicago and Kathleen Gavin, originally from Mayo, but long-time Co Dublin resident, is the pianist.

What is it about the piano?  Or, let's be more precise, what is it about a well-played piano back-up that makes almost everyone play so well, along with it?  Off the top of my head, I can think of no relatively recent records of traditional music (and not just Irish music) which have benefited from a good piano player behind the melody instruments, which I haven't just loved. 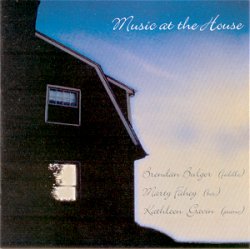 Can it simply be that, for my generation, it conjures up warm memories of family parties, pub sing-songs?  Whatever the reason, I'd far rather hear a simple, rhythmic piano vamp than all the guitars and bouzoukis in the world - and I don't mean I've not heard some wonderful guitar and bouzouki playing in my time.

Fahey and Gavin have known each other for almost 30 years, but one would imagine that they'd not been able to meet all that frequently, while Bulger only came to know Fahey as a result of moving to Chicago in 1998.  But despite the differences in their musical pasts, the playing heard here sounds as if they'd all been brought up together.  The fiddle and box parts are incredibly tight - yet they manage to sound relaxed at the same time.  There really is some lovely music to be heard.

Good music evokes memories and resonances, and Geoff Wallis (in a fRoots review) says '... there can be no greater compliment paid than to report that this album evokes memories of one of the classic recordings, A Tribute to Michael Coleman (Shaskeen Records OS 360) made by Joe Burke, Andy McGann and Felix Dolan and issued in 1966.'  For this reviewer, who doesn't have that record in his collection, another classic, Ómós do Joe Cooley (Gael-linn CEF CD 115), by Frankie Gavin, Paul Brock and the wonderful Charlie Lennon, comes to mind.

The sixteen-page booklet includes very detailed information on each tune's source, and a couple of pages devoted to each of the contributors musical histories.  From it we learn that their combined aim was 'to bring some seldom heard or older tunes to light again and to bring forth some unusual versions of more established tunes.'  They certainly seem to have succeeded in that aim - I recognise few of the tunes, and those that I do are in unusual and interesting versions.

But that is not the real value of this record ... it's the skill and the lift of the playing, and the sheer, gorgeous noise they make together which sets this CD apart from so much recently recorded Irish music.  Have a quick listen to a pair of hornpipes - St Gilbert's and The Stage and you'll see what I mean.

I do have a few reservations, though.  The CD was recorded live in Marty Fahey's house - 'no headphones, no sound-booths'.  In general, producer Dennis Cahill had done a wonderful job, but I sometimes feel that the piano is a little too far forward in the mix - particularly on the first track.  When it is, it begins to sound unnervingly like an electronic one - which the photos show it clearly wasn't.  Then, a couple of the more modern tunes seem a little too clever for their own good (the composition, that is - not the playing).  Lastly, there are two Airs included, both as solo piano pieces, one by Marty Fahey, the other by Kathleen Gavin.  Neither, I feel, are worthy company for the rest of the music played here - particularly Fahey's In Memory of Coleman (once an Ed Reavey reel, and probably far better left that way).  The performance of an Air, it seems to me, needs to be a lot more than merely playing through a pretty tune a couple of times - which is what I feel we get here.

Those minor gripes aside, this is the best Irish music I've heard on record for quite a while.  You can get it from:  www.musicatthehouse.com