Before the night was out ... 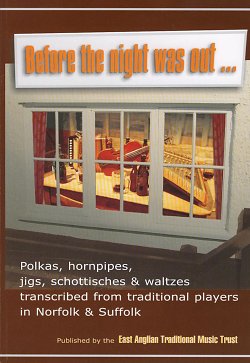 This is, in my opinion, almost exactly what a good tunes book should be; one which centres its attention on the players and their musical contexts, and uses the tunes as illustrations.  By the end of it you have been given an extremely complete picture of the traditional musical life of East Anglia in the mid- to late-20th century.

This makes it a far more useful guide to playing southern English traditional music well, or properly, than a more conventional book of tunes of the sort we have become used to can ever do.  What is more, every tune featured here is currently available on CD, in the version and by the player concerned, and a Discography lists them all - so you can buy the record and actually hear how the traditional musician sounded.  It occurred to me that another approach might have been to include a CD of all these recordings with the book - but then you'd only get to hear that one recording, rather than the wider range of their playing you'd get if you bought all the CDs.

The book begins with a 6-page Introduction, containing sections on: Social Context; Repertoire; Selection of Material; Methods of Working; Instrumentation and Style; and Conclusion.  Whilst Katie Howson is credited only as 'Editor', I would guess that she wrote all of this absolutely exemplary text.  I have never seen this material better covered.

Next comes a The Musicians section, which contains mini-biographies of all 19 of the source musicians the book covers.  Again these are superb, and give a much-needed musical context to the players and their music.  The fact that Katie and John Howson knew almost all of these musicians personally adds tremendously to the worth of this section.

We then get the tunes, set out in polkas, hornpipes, jigs, schottisches and waltzes sections.  There are 64 tunes - but quite a number appear in two or even three versions, from different players - so there are actually 94 sets of staff notation.  Once again, this places this publication head and shoulders above the competition.  My only slight reservation is that, whilst some short notes follow the staff notation of each tune, there is also a 14-page section of Tune Notes later in the book.  I would have prefered to have had this information included along with these short notes, after each tune - rather than the reader having to turn to a separate section to read them.

Katie tells me that the 'short notes' are mainly about how to play the tunes, whilst the Tune Notes give some background information.  Their separation was partly to take into account the separate interests of the perceived audience for the book, and partly to simplify the layout problems my prefered method might have produced.

Regarding the transcriptions of the tunes, it appears that, once written, these were converted into sound files which were listened to and compared with the original sound recordings.  Final tiny adjustments were then made to ensure the greatest possible accuracy.  If only other publishers treated the music with this level of respect!

Not being a music reader myself, I wouldn't have noticed that part of one of the tunes is missing.  Katie tells me that :Since posting out the advance copies we have had a lovely letter from Rollo Woods, who points out in a very gentlemanly manner that part of one of the tunes is missing. (Gay Ladies Polka, no.3).  We will be inserting a proper erratum slip into all copies from now on, and the missing part will also be on our website.  Rollo has also kindly supplied further information about some of the tunes - an expected outcome of publishing any research - and this info, and anything else received will also go on the website."

Finally, a Further Information section gives us a Discography, by performer and by album, a Bibliography, an Index of Tunes and an Index of Musicians.  What more could one possibly want ... beyond clickable links?

Everything is very well laid out and presented; the tune transcriptions beautifully clear and the whole thing is greatly enhanced by loads of terrific photos.  This outstanding book is available for È17.95 plus postage and packing via EATMT's web shop at: www.eatmt.org.uk   Your best purchase of 2008, so far.