The Traditional Tunes of the Child Ballads 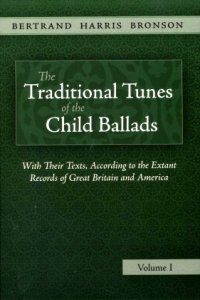 Francis James Child's English and Scottish Popular Ballads, published in ten parts from 1882 to 1898, contained the texts and variants of 305 extant ballad themes written down between the thirteenth and nineteenth centuries.  Unsurpassed in its presentation of texts, this exhaustive collection devoted little attention to the ballad music - a want that was filled by Bertrand Harris Bronson in his four volume Traditional Tunes of the Child Ballads.  When it was first published in 1959, the collection, nearly 2,200 pages of tunes and texts, was hailed as a milestone in ballad scholarship, and has never been surpassed.

Camsco Music (the company which handles the sales of our Musical Traditions CDs in the States), in conjunction with Loomis House Press (publishers of the new edition of Child), has now re-published The Traditional Tunes of the Child Ballads in facsimile, putting it back in print for the first time in over 30 years  All four volumes are available from Camsco Music or Loomis House Press.  They have printing sources in both US and UK, so there are no huge overseas carriage costs.

I now have Volume 1 in front of me, and a handsome piece of work it is, too.  The 20-page Introduction is extremely interesting, covering: The Primary Importance of the Tunes; The Child Canon; Basis, Scope and Aim; and Editorial Procedure.  A 7-page Acknowledgements section follows in which the author thanks collectors and accademics from right accross the Anglophone world.  Perhaps oddly, I can see no mention of Peter Kennedy here - I wonder why?

The ballads are presented with a basic discussion of the ballad and its musical forms, followed by a number of examples of variants Bronson has unearthed.  Each is presented with both tune and full text, together with its source and sometimes specific notes.  The number of the variants can be quite staggering - a singer wishing to have a go at a 'different' version of Lord Randal, for example, has a choice of 103, while for Lord Bateman it's 112!  Whether these are exceeded in any other ballad I don't know (Barbara Allen maybe?), but it certainly gives you an idea of the scope of this huge work.

Everything is very well presented, clearly printed on very white paper.  The quality of the binding appears to be excellent.  My only complaint (which should really be laid at the feet of the original publishers, Princeton University Press) is regarding the size of the type used.  The Introduction and Acknowledgements are, I would guess, set in a 7.5 point serif font, which is small but acceptable, but the remainder of the work is 6 point.  Given that many (most!) of today's readers are likely to be over 50 years of age, I think this may be rather too small ... perhaps a new set of reading glasses might be a sensible adjunct to this admirable publication!

Camsco Music are to be congratulated in re-publishing this fascinating work - and in getting all four volumes out at once - and (with over 500 pages per volume) at such a sensible price!  Softcover: Ł23.75, hardcover: Ł28.50 per volume.  Buy them from Dick Greenhaus at Camsco Music, using PayPal - Email him at: dick@camscomusic.com

It's not ready just yet, but Dick tells me he'll send a CD-ROM of the whole set in searchable PDF format to purchasers of all 4 volumes.  This really would be a boon.