This is another fine example of the rich heritage of traditional music from County Clare.  Tin whistle and flute player Bríd O'Donohue comes from Milltown Malbay where she runs local tin whistle classes and has been involved in the annual Willie Clancy summer school for over 20 years.  Indeed she was related to Willie and got some of her early tips from the great man himself. 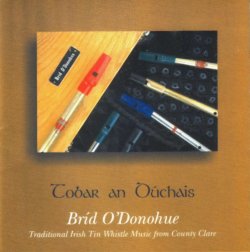 Her uncle JC Talty who played the flute with the Tulla Ceili band for years also helped her develop her style.  Given this pedigree, and the fact that it was launched at this years Willie Clancy summer school, it should come as no surprise that this CD presents some of the finest traditional music to be released in years.  Played on half a dozen different whistles in keys from Bb up to Eb, with absolutely no accompaniment, it's as close as you'll get to the pure drop.

The opening track of two reels, The Green Groves of Erin / The Copper Plate, sets the scene, the pace is relaxed, the rhythm is strong and there are a few variations to the basic tune to keep the listener hooked.  The tin whistle is an often under-rated instrument, and because it seems so easy to manipulate, players too often resort to excessive speed, or wild melodic variation to provide interest.  Bríd has no need for this trickery, she plays in a true tin whistle style which puts her in a very select group alongside Kieran Collins, Michael Dwyer and Micho Russell, who also played the flute but always seemed to regard himself as a tin whistle player.

The style is unhurried and the ornamentation is restrained but very effective, rolls, triplets and the odd bit of tonguing for articulation leave the tunes to speak for themselves.  This is very much a record where the tunes and the sources are more important than digital dexterity.  While a high proportion of the tunes have links to pipers, there's no simple mimicry of the pipes and the settings are clearly fitted to the whistle.  There's a nice touch at the end of each part of The Humours of Ballyloughlin where Bríd, possibly unconsciously, hits the top D instead of the expected piper's hard D.  There is a variety of tunes in the 15 tracks, and while reels predominate, Bríd has included a few slip jigs, hornpipes and a set dance.  There are three slow airs included and each one is played with feeling and a deep understanding of the idiom.  The Bold Trainer O is particularly touching, as it calls to mind recordings of Willie Clancy's playing of this lament.  None of the tunes are particularly rare, The Cornstack, composed by Nenagh fiddle player Sean Ryan is one of a few modern tunes on the CD, but it's the heritage that counts.

In the excellent sleeve notes, each tune is put into context, with sources and recollection woven together to give a very personal perspective on how the tradition is passed on.  The recollections are reinforced by the choice of photos used to illustrate the booklet, dating back to Brid as a very young girl, through the 1970s playing alongside Mary Bergin and others, up to modern times playing with her own children.  There's even a rare photo of Wille Clancy playing the flute.

The production is also excellent, the whistles have been recorded cleanly but not too closely miked that you notice the breathing.  Overall it sounds as if Bríd has enjoyed recording what she presents here.  Bríd has put years into quietly passing on her love and understanding of Irish music, and this recording should bring her work to a wider audience.

An essential addition to any collection, the CD is available from Bríd's own website at: www.bridodonohue.com, Custy's, or Copperplate in England.