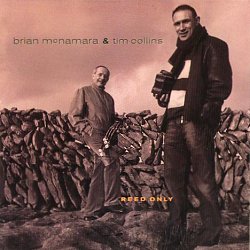 Reels: Aggie Whyte's Reel / The Small Hills of Offaly / The Widow's Daughter.  Jigs: The Ballinacourty / Snug in the Blanket.  Hornpipes: The Good Matured Man / The West End.  Reels: The Wexford Lassies / Biddy From Muckross / Spike Island Lassies.  Air: Ag Taisteal na Blßrnan (Travelling through Blarney).  Reels: The Nine Pint Coggie / Sailing into Walpole's Marsh / The Beauty Spot.  Jigs: Petticoat Loose / Crˇ na nGabhar.  Reels: The Boys on the Hilltop / The Cashmere Shawl / The Sunny Banks.  Jigs: Fasten The Leg In / Westering Home / Tell her I am.  Hornpipe: Johnny Cope.  Reels: The Lady's Cup of Tea / The Basket of Oysters / The Kerry Lassie.  Jigs: The Wearied Lad / The Humours of Rahey.  Air: The Bright Lady.  Jigs: The Return to Burton Road / Do You Want Anymore? / The Humours of Glen.  Reels: John Kellyĺs Concertina Reel / Our House at Home / The Ballynacally Reel.

Well, this is an easy one: this CD is absolutely fabulous!  Buy it!

You wany more?  Oh well - Brian McNamara is a fantastic piper and Tim Collins is a fantastic concertina player.  Pipes and concertina go brilliantly well together.  Both are recorded in scintillating digital stereo, playing a well-varied selection of less-than-common tunes.  They are backed-up on some tracks by top-class people like Pßdraic O'Reilly (piano), Michael Rooney (harp), Alec Finn and Mick Conneely (strings) in a way which enhances, yet never intrudes.

I'm at a loss as to selecting a track or tracks for sound clips, since all (it seems to me) are equally wonderful.  If I must (sound clip left) here's a couple of jigs: the first, Petticoat Loose, is from the late, great Johnny O'Leary, and the second, Crˇ na nGabhar, comes from the repertoire of James Quinn (1805-1890), better known as Old Man Quinn, a piper from Aughavas - Brian's home village.  Something a bit faster?  Try Our House at Home then (sound clip right), from the Stephen Grier manuscript - whence came a number of tunes on the lovely McNamara Family CD (review) of a few years back.

This really is a lovely record - at once both modern sounding and completely traditional.  The sound sparkling and precise; the style relaxed and at ease with itself and with the music.