Music in a Breeze of Wind 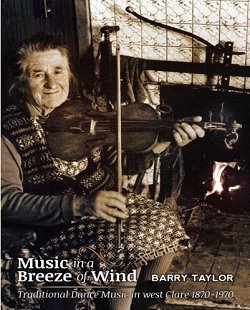 Barry Taylor was born in Manchester and developed an interest in Irish music in the early 1970s.  This took him to the Willie Clancy Summer School in 1975 which introduced him to the wealth of fiddlers and other musicians in the West of County Clare.  He made his permanent home there in 2001.

This book was originally published in 2013, but Barry is now offering the book for a mere £5.00 + p&p a copy, so a review seems timely.

Lavishly illustrated with over 300 historic and contemporary photographs, the book looks at the role of dance music in social and cultural life of the area of the Atlantic coast from Kilrush, Kilkee through Miltown Malbay to Doolin.  Starting with the rise of music and dance in the home in the wake of the Famine, the story is followed through country house dancing and the growth of dancing in pubs.  The book ends with the establishment of the Willie Clancy Summer School and the globalisation of Irish music that developed in the wake of the folk revival of the '60s and '70s.

To illustrate the journey Barry Taylor looks at two significant travelling pipers, Garret Barry and Johnny Doran.  Blind piper Garret Barry played round the county in the last couple of decades of the 19th century and influenced Gilbert Clancy and Nell Galvin.  Doran was a Wicklow piper who was welcomed in Clare through the '30s and '40s and he was responsible for reintroducing the art of piping to Clare through Willie Clancy and a handful of his contemporaries.

Individual chapters cover the other main instruments in common use; fiddle, flute and concertina.  Curiously the button accordion was not a common sight in the period under review, although neighbouring counties Galway and Tipperary lay claim to the most influential Irish box players of the second half of the last century.

Personal reporting based on Taylor's own relationships and friendships with native players are combined with transcribed interviews from personal and RTÉ recordings which brings a very intimate feel to the book, something somebody observing from the outside can never hope to achieve.

The section on fiddle players covers many who are no longer with us, such as Bobby Casey and Martin 'Junior' Crehan although recordings of these players are widely available.  The early part of the chapter recalls Thady Casey and Bobby Casey's father, Scully as teachers and mentors.  The sense of the personal comes through strongly in the section based on reminiscences of John Kelly who died in 1989.  His story take us back to the end of the 19th century and names such as Patsy Geary and Kelly's mother Elizabeth Kelly, who are remembered in current tune names that all have Kelly as their source.  His later acquaintance with Nell Galvin brought more of Garret Barry's tunes back into current repertoires.  All through this chapter, the personal is backed up by Taylor's own knowledge to bring the story of rural music making to life.

The chapters on concertina and flute playing follow the same pattern.  The final chapters look at the decline of the country house dance in the aftermath of the Public Dance Hall act and the shift into pub playing and ceili dancing and the resurgence of the music promoted by Comhaltas and more locally by the start of the Willie Clancy Summer School following Clancy's death in 1973.

This book provides hours of fascinating reading; it's a book you can dip into for a while or indulge in more intense study.  A remarkable study of music and style in a comparatively small geographical area, it should be on the bookshelf of any enthusiast of Irish traditional music.  The book is available for £5.00 + p&p direct from Barry Taylor by contacting him at mibw@eircom.net