Own label, no nunber 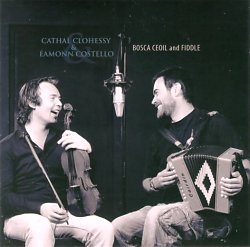 I was sure that I'd like this CD before I'd even played it - for a start, the two gentlemen pictured on the sleeve look as if they're really enjoying the music and each other's company.  Then there's the fact that Eamonn Costello is playing the same Cairdín melodeon that I play myself.  And, to top it all, I've heard a melodeon called a lot of things in my time ... but 'music box' has never been one of them!

So - what of the record?  A reviewer at alt-celtic-music wrote: 'A gentle master-class in the art of traditional Irish music', and I couldn't have put it better myself.  We start with a very restrained version on Margaret Barry's splendid 5-part jig The Stray-Away Child, followed by The Minstrel's Fancy, a hornpipe I know as The Buck in the Mountain ... though we play it a little slower, in the English way - and call it The Duck in the Fountain!  It's followed by the excellent Claw's Hornpipe - a tune we'll definitely have to learn.

Next comes Sergeant Early's Dream, described as a 'slow reel' - though it's played here as an air, or 'piece'.  Six more conventional reels follow, including the lovely Gan Ainm.  A nicely judged pair of jigs come next - it's always surprising to find such a lively tune as The Drowning of Bruckless commemorating the loss of more than 80 fishermen's lives.  The reel Miss Langford is treated as was Sergeant Early's Dream, but then breaks into normal tempo after a couple of iterations.

It would be a bit tedious going through each track in turn, though mention should be made of track 13, Philobus / Brian O'Kane's (waltz and march) , though it should be noted that the 'march' is actually played as a barndance - and a damn fine one it makes, too!

It seems a shame to have any grumbles about such an enjoyable and interesting CD, but one thing does rather annoy me.  I feel that any record should allow the listener a moment or two to digest what they've just listened to before setting off on the next track.  The default 2 second gap is usually insufficient, in my opinion.  Here we find that the gap has been cut to 1 second (or even less in a few cases), so that there's often no noticeable break between one tune and the next.  This must have been done deliberately, since defeating the default 2 second gap has to be a conscious decision, and doesn't happen inadvertently.  Damned if I understand why that decision was made.

But it's a lovely record all the same, and is available through Copperplate Distribution in the UK.