Ballads, songs and tunes from the Scottish Borders

This is the third of Mike Yates' Borders CDs; the first two - Travellers Tales, Vols 1 & 2 - have also been reviewed here.  Like them, this one is primarily intended for the 'home market' - where there's still a deal of music to be found, and an interested audience. 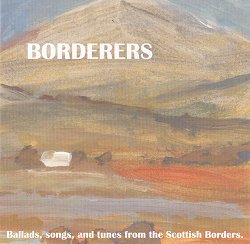 Mike's website (at www.kyloerecords.co.uk) describes the CD as: 'a collection of recently recorded ballads, songs and tunes from the Scottish/English Borders.  Ancient ballads, such as Johnny Armstrong, The Brothers and The Dowie Dens o' Yarrow rub shoulders with more modern songs, such as The Canny Shepherd Laddie o the Hills, Boys o Boys, Jimmy Raeburn, Lassie wi the Yellow Coatie and The Border Hunt Ball.  There are also fiddle, accordion and whistle tunes, children's songs, and, for good measure, a monologue, MacAllister's Dance Before the King.'

What this description doesn't convey is the quality of the performances.  The words 'recently recorded' might alert one to the possibility of aged performers, scarcely able to hold a tune or a rhythm, but things are happily a bit different up there than they are in much of the rest of England.  We have several performers who you'd be happy to pay to hear as guests at your local folk club, and a great many more you'd be overjoyed to find amongst the regulars - but already I'm misleading you; this is no folk club record.  It's a record, in the true sense of the word, of a community and its songs and music.

Marion Anderson has tracks 1, 13 and 23.  She's a fine accordionist of the northern school, with plenty of bite and good rhythm, and supplies sets of jigs, reels and a waltz to the proceedings.  Cathie Johnson, a farmer's wife from near Jedburgh, sings at many local events and sounds very like Daisy Chapman in her sprightlier mode.  She supplies tracks 2, 11 and 26, to good effect.

Willie Beattie should need no introduction to MT readers, since he has four tracks on Up in the North and Down in the South MTCD311-2.  Here he contributes three of these, The Brundenlaws, The Dowie Dens of Yarrow and Johnny Armstrong, together with a composition of his own, Bruntfauld.  George Brown adds some lively tin whistle playing between songs with Parnell's March/The Marquis of Lorne and The Belfast Hornpipe later on track 21, followed by Jock Anderson, a retired shepherd, with the first of his three bothy style songs.

Douglas Birch, a former Director of Education for the Borders region, sings two very different songs, The Wee Toon Clerk and Lassie wi the Yellow Coatie, both extremely effectively.  His wife Elsie appears a couple of tracks later with a Medley of Children's Songs, and this is absolutely delightful.  Whether the songs themselves were only short, or these fragments are all Elsie remembers a lifetime later, is immaterial; she delivers them with obvious relish and a great deal of charm and good humour.  You can so easily imagine her sitting beside you in a comfy armchair, reminiscing about her childhood and the songs that were sung.  A truly lovely track - and exactly what one sort of traditional singing is all about.

Kathy Hobkirk is Bob Hobkirk's daughter in law, and a delightful singer who learned some of her repertoire from near neighbour, Willy Scott.  She sings Boys O Boys and The Christenin', and I was sorry to find no more here.  A full CD of her own at a later date, perhaps?  David Anderson plays fiddle in the 'light' border style, with little double stopping; clearly a dance player, there's nothing here to indicate that he's in his mid seventies.  Next we meet Willy Scott's sons Dougie and Sandy - Dougie sings Jamie Raeburn, The Threshing Machine and Whack-fa-Doodle, while Sandy contributes the only recitation here, MacAllister's Dance Before the King.  Finally, Fred Baxendale, a fiddler from Mike's new home town of Berwick-on-Tweed, plays a beautifully paced Flowers o the Forest.

As I said, a CD intended for the local audience - but I can't imagine many MT readers who wouldn't thoroughly enjoy it ... whilst bemoaning the fact that they don't live in a community with an on-going oral tradition as strong as this one.