Sometime in the early 1960s I came across a Folkways LP called The Borders, a collection of field recordings made chiefly on the Scottish side of the Scots/English border.  The recordings had been made by the American collector Sam Charters who had, I think, been pointed towards the performers by members of the School of Scottish Studies in Edinburgh.  This was the first occasion that I heard that most marvellous of singers, Willie Scott, singing such gems as The Keilder Hunt and The Shepherd 's Song.  There was also, I remember, a remarkable fiddle player, Rob Hobkirk, playing tunes such as The Laird O 'Drumblair and The De'il Among the Tailors. 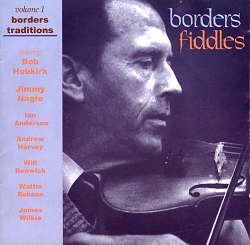 Over the years I came to wonder why I had not heard anything else by this wonderful musician.  Now, at long last, he has - in a manner of speaking - resurfaced alongside other fine players such as Jimmy Nagle and James Wilkie.  I say 'in a manner of speaking' because these are 1973 recordings.  In 1992 Bob - as he is now known - was involved in a near fatal car accident, which more or less put paid to his playing.

Border Traditions - a new label from Jedburgh - has now issued these superb recordings, made informally in the player's home, together with more up-to-date recordings of the Jedburgh fiddler Jimmy Nagle (who usually plays with the band Fiddler 's Leap) and a '50s recording of James Wilkie, who was from Langshaw, although he spent much of his life in Coldstream on the banks of the River Tweed.  There are also short conversational tracks of Bob Hobkirk and James Wilkie, and another from Will Renwick, a Lauderdale fiddler who was recorded in 1962, although there is only a brief example of the latter's playing on the CD.

The booklet notes, ably written by Dr Fred Freeman, point out that the fiddle music of the Borders has been rather overlooked in recent years.  Scottish fiddle music, to most people today, is the music of the North East and of Shetland, of Scott Skinner and of Tom Anderson.  And, of course, this is incorrect.  There always has been a thriving tradition of fiddle music on both sides of the Border.  Think, for example, of Willy Taylor or Ned Pearson on the Northumbrian side, or of Tommy Hughes who played with his father and grandfather at many a Border kirn.  In Jimmy Nagle we see the tradition continuing for a further generation, Jimmy being the grandson of Tommy Hughes!

On this CD we find examples of both 'Heavy' and 'Light' fiddle styles.  The heavy, characterised by chording and heavy double-stopping, probably began in the 18th century when fiddlers started to play alongside lowland pipers.  It became necessary for them to increase their volume so that they could be heard, a fact which may explain Tommy Hughes's comment (made some years ago on his Springthyme album Tom Hughes and His Border Fiddle):

I play a lot o double string work - which is considered a fault wi some (folk).  I've heard twa or three say they dinna ken how I got the double string action.  It juist comes natural.  That's the way ma faither an ma grandfaither din it.

On the other hand, the so-called 'light' style seems to have evolved in the setting of the fiddler's own homes, or in quieter pub-sessions with their friends.  It's a style that both Bob Hobkirk and Wattie Robson mastered and, as Dr Freeman asserts, it is one that 'runs counter to the fiddle/accordion band playing which came to dominate the Scottish dance scene.  It is more intimate and delicate, perfect for the wee room, where surrounding ears are poised almost on top of the instrument.'

Liking this album as I do, I find it hard to pick out any individual tracks for mention.  Bob Hobkirk is just superb and I marvel at the quality of his playing, especially as these are informal recordings.  I think it only fair to say that, on the strength of these recordings alone, he must stand as one of the all-time greats of Scottish music.  One thing does slightly disturb me.  On a couple of tracks Ian Lowthian has been dubbed playing 'with' Bob Hobkirk.  Ian is well-known in my part of the Borders for his sensitive playing and his fine compositions and the results are very good indeed.  But I think that these tracks can, perhaps, be rather misleading.  So far as I know Bob and Ian never actually played together and so, in truth, we will never know just exactly how they would have sounded had they really been playing together.

If I seem to be heaping all the praise onto Bob Hobkirk then please don't think that this is at the expense of the other performers, especially Jimmy Nagle who is another remarkable fiddler player.  I think that many reviewers, myself included, feel that they are not doing their job correctly unless they can point out a few faults.  But, like Bob Hobkirk, we have, in Jimmy, another master of his art and craft who also provides us with a faultless set of recordings.  In one way, this CD has left me feeling almost redundant!  But, in another way, it has given me the opportunity to listen to some extremely beautiful music.  Border Traditions deserve a great deal of praise for this venture.  I only hope that people will buy this CD in sufficient numbers so that they will be able to issue other similar volumes.