Lower-case in e.e.cummings mode, bohola will be a new name to many people, but one of the Chicago-based trio's members, piano accordionist Jimmy Keane, may be familiar to some thanks to previous albums such as Kilkelly recorded with Mick Moloney and Robbie O'Connell. 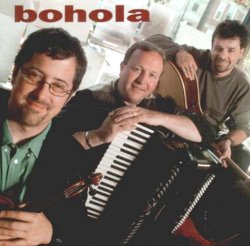 The other two members are Seįn Cleland who plays fiddle, viola and baritone fiddle and bouzouki player Pat Broaders who also provides vocals and plays something called a 'dordįn'.  Now, in case anyone's bewildered by the nature of said instrument, then this reviewer shares your wonderment.  In Irish, 'dordįn' means 'hum', 'buzz' or 'drone' and probably here refers to an instrument which produces such a sound (any enlightenment would be much welcomed).

In terms of value, this album comes in at a whacking 65 minutes, thanks in part to the band's predilection for playing long sets.  So for instance, track two rolls home in more than eleven and a half minutes, consisting of Johnny Doherty's March, Ewan MacColl's Moving-On Song (sometimes known as Go, Move, Shift), Peacock's Feather, Mother's Delight Reel, Lady Ann Montgomery and Rolling in the Ryegrass, all flowing neatly together.  Track four is even longer at almost thirteen minutes, but, have no fears, for there's too much purpose here for bohola to be crowned The Grateful Dead of traditional music.

Contrastingly, and surprisingly for a release on a major label, the liner notes are astonishingly skimpy, consisting of merely two pages of text.  These include the track listings and times, though no indication of tune type is provided unless such appears in the title, such as The Merry Old Woman Jig.  The most irksome part of this is the statement that 'All tunes and songs traditional, arranged and adapted with additional music and/or lyrics by Jimmy Keane, Seįn Cleland and Pat Broaders'.  It would have been extremely useful to know which tunes had been adapted and the precise nature of this modification.  Furthermore, apart from a cursory 'Here are some of our favourite tunes and songs', no actual information is provided on the music's origins.  Indeed, the greatest amount of text is devoted to acknowledgments!

The trio play for the most part in the kind of pulsating, energetic fashion popular with many contemporary musicians, very much setting the mood with an almost raw set of jigs, but are equally at home on more relaxed numbers.  The previously mentioned track four, for instance, includes a lullaby, the song The Shamrock Shore and a barndance before launching into an increasingly frenetic reel, The Humours of Westport.  This also demonstrates one of the album's most pleasing characteristics, the ability to change pace, rhythm and emphasis with considered grace and lack of over-elaboration.

For those not fond of the piano accordion's ability to drown out other instruments, the mixing here is superb and Jimmy Keane sticks pretty emphatically to the melody without being tempted by some of the more ornate devices employed by some practitioners.  He and Cleland are the stars, consistently weaving a considered melodic interplay, while Broaders holds the rhythm in a relatively understated fashion.  Pat's a pretty fine singer too and imaginative in his song selection though, thankfully, like his colleagues never wandering far from his roots to forge an enjoyable new album.