A Trip to the Lakes 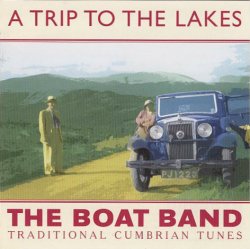 This is a pretty unusual CD in terms of its content, its sound and its history.  It was first produced as a CD-R; a 'Souvenir Edition' produced to aid the foot-and-mouth-stricken Duddon valley in Cumbria, and the folk festival its Newfield Inn decided to run in 2001, in an attempt to cheer everyone up.

I first encountered it when a Cajun band from the north of England played in a Stroud pub almost four years ago, and its leader, Greg Stephens, e-mailed me to ask about local sessions.  His was not a name I knew, but it appears that he made probably the first ever LP of north-west tunes in the '70s, gave talks on the subject, played barn dances throughout the region, and gave Jamie Knowles many of the tunes for his Northern Lass book.  So he's not a Cajun type taking a passing interest in English music, but a died-in-the-wool English musician who has taken a passing interest in Cajun.  Greg also kindly gave me the last copy of the 'souvenir batch' of CD-Rs.  Now it's been (re)released on Harbourtown in a slightly remixed version - and a very fine piece of work it is, too.

But before going on to discuss the CD it's worth commenting upon its extremely unusual booklet.  Aside from a short comment about the CD's genesis and a 'thanks to' section, this is wholly taken up with Greg Stephens' long essay on the Cumberland fiddler William Irwin, 1822-1889, from whom many of the tunes come.  This is a superb piece of historical reconstruction - just the sort of thing I would have liked to have published in these pages - so now it; as an article.   The only unfortunate aspect of the whole thing is that it left little or no room in the booklet for attribution of the sources of the tunes - which is a shame since many will be new to most listeners.  However, Greg says he will soon be publishing all this information in MT as well - so keep your eyes open for that.  And so, on to the CD.

The Boat Band are: Kate Barfield - fiddle; Mark Burke - percussion, melodeon; Greg Stephens - banjo, guitar, percussion, melodeon; Tony Weatherall - melodeon.  "Three melodeons!" I hear you cry - rightly aghast.  Don't worry; usually it's only one per track.  Not only that, but the playing techniques make them sound like quite a range of instruments (bagpipe, whistle, mouth organ, accordion) and - possibly because the basses are not much in evidence - rarely like the usual southern English box.

There are also two songs; one being The Birds Upon the Tree, which was written by the American W C Robey and first published in New York in 1882.  Percy Grainger noted a version in 1905 from the great Lincolnshire singer Joseph Taylor.  Mike Yates recorded Charlie Bridger, of Stone-in-Oxney, Kent, singing it in 1984, and this now appears on the MT CD of the same name (MTCD333).  As The Birds, it was sung by Tom Brodie, of Rockliffe / Wreay, Cumberland, on Pass the Jug Around (Reynard Records RR 002, reissued on Veteran VT142CD).  The other is Corby Castle, another song from the Pass the Jug Around record, there sung by Len Irving.  I'm sorry to report that I found both rather less enjoyable than the tunes.

The rest of the CD impresses on any number of levels.

Firstly, there are 29 tunes, almost all of which are good'uns - and most will be little-known to listeners who've not made a special study of northern English dance music (here's a clip of The Carlisle Reel).  The playing is also of a high standard - not just the individual musicians, but also the ensemble work.  But perhaps most impressive is the imagination and care which has obviously gone into arrangements.  I don't use the word 'arrangements' to describe some clever-clever series of solos and harmonious backings.  The band plays simply, and there are rarely more than three instruments heard at a time, yet there is never a feeling that you're waiting for the next tune to start; everything remains interesting and buoyant throughout.

The overall sound is also interesting - as I mentioned earlier, Tony Weatherall's humble melodeon often sounds like several other instruments, usually in combination with Kate Barfield's fiddle.  The percussion is often strange and imaginative - on track 8 it sounds like the teeth of a comb being rubbed against a matchbox - but always effective.  The guitar accompaniment is (almost) always laid back, spare and does its job superbly without being intrusive.  It's such a relief to hear a back-up player who doesn't feel the need to play all the possible chords, or that his beat has to be insistent.

But I suppose that the one thing most people will notice first is that Greg Stephens' banjo - ably supporting the fiddle and box elsewhere - takes the lead on three tracks and leads the tune in several other places.  In the set of reels on track 4: the first tune is solo banjo; the second and third have guitar backup, and on the last the roles are reversed with guitar leading to banjo accompaniment.  For the excellent hornpipe set on track 9, the banjo retains the lead throughout, but the character of the playing and the guitar backing change with the tunes, yet manage to retain the drive and momentum of the piece as a whole.

Perhaps the most interesting aspect of this track is that Greg manages to inhabit that rhythmic no-man's-land between the plain and the dotted hornpipe (sound clip, Stybarrow Crag) - which, it should be mentioned, is where a great number of the best traditional musicians live, too.

This is all stuff you hear, and appreciate, after several listenings through the CD.

I imagine that most first-time listeners will be stuck particularly by the four slow tunes on the record - the three waltzes and the final air.  These are absolutely delightful, and I can't leave you without a little bit of track 3, The Kendal Waltz (sound clip) which, several years later, is becoming a favourite in many sessions.

Johnny Adams, who knows a deal about such things, said of the CD:

It is a favourite of both myself and Mr Partington because it is a very honest bit of music which has all sorts of influences airbrushed into it, and for me challenges some of the assumptions about North English music.

Yes indeed.  An extremely rewarding CD and very well worth adding to your collection.