It has been five years since I reviewed the last Bismarcks' CD, Upstream, (or any EFDSS record, for that matter), and I was beginning to suspect that the Society had given up on its CD release programme ... and just when I'd again taken up the membership I resigned some 40 years ago!  However, quite out of the blue, this arrived last week, 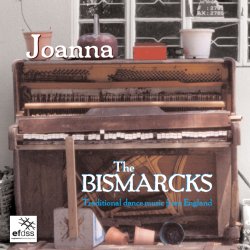 and it was a pre-release review copy (the actual release date is April 2005) - the first time any such artifact has ever landed on my doorstep, from any record company!  I was surprised to read the record number EFDSS CD10, since Upstream was EFDSS CD04.  However, it appears that CDs 05 to 09 do exist - they are amongst the Society's educational releases.

This isn't the place to rehash my discussion of exactly what a record of music for dancing is supposed to be for - interested readers can look at my review of Upstream for that.  Audiences apparently want bands to make records, and a recent CD seems almost mandatory if a band is to get much work.  So, here's the latest of such offerings - let's see what it has to offer.

As with Upstream, it's a high quality recording of a fabulously good band playing English style dance music in the modern manner.  The playing is crisp and bouncy, the tunes melodic and interesting, the tune pairs work well together, and there's a wide selection of dance types to enjoy.  However, there are some subtle differences, and a 'more of the same' review wouldn't be appropriate.  Indeed, I find this one to be a record where first appearances are deceptive, and my initial impressions have been altered by further playings.

On first hearing it, I decided that the 'Traditional Dance Music from England' had taken on a more northerly aspect than was the case with Upstream, but re-reading the tune notes of both CDs makes it clear that the sources remain pretty evenly spread across England, with about the same number of Continental inclusions.  I now see that it is the style of the playing which has changed a little in the past five years, being here somewhat less loose and rolling than before, more percussive and tight - in the Northern manner - though without, I think, the faster tempi often used north of The Wash.  One result of this is that Gareth's piano - no less loud than before - is now far less dominant; the three instruments enjoy a much better balance than on Upstream, although it has to be said that, when the fiddle and box play together, it sometimes remains difficult to hear very much of Nina.

The press blurb states that the band has gathered and rehearsed this present selection of tunes specially for the record and has not yet included them in their current dance repertoire - indeed, that they look forward to using them publicly as soon as the CD is released in April.  This led me to my second initial misjudgment; that the music was somewhat stilted - technically very precise, but a little cold.  I'm reminded of the old chestnut I used to preach to the fledgling Old Swan Band: "Practicing only makes you sound practiced!" - and I thought that this was the case here.  Further listening reveals that the playing retains all the bounce and verve which are the Bismarcks' hallmarks, but expressed in rather more subtle, less obvious, ways.  However, I'm bound to say that I think the record might have been even better had the sets been played live for a few months first.

As you can see from the tracklist above, there are good tunes a-plenty here - some personal favourites being Mr Welch's Favourite, Stockton / Brown's Hornpipes, Goodnight and Joy be with You, High Tea, and The Valiant.  I can't really comment on the booklet which will accompany the CD when it's released, since I only have the draft of the tune notes.  These are accurate as far as I can see, but a little less full than those in the Upstream booklet.

All in all, a fine successor to the Bismarcks' previous CD, and one which amply repays repeated listenings.  Beyond their own dance performances later in 2005, I can see a lot of these tunes appearing in sessions up and down the country in the not too distant future.  A CD which will be well worth buying when it's released in April.