Great music, mixed feelings.  On one hand, as the first CD by a newly established group, Apotropaica is a remarkable recording including both new arrangements of traditional tunes and original compositions strongly influenced by folk traditions from Emilia and Veneto. 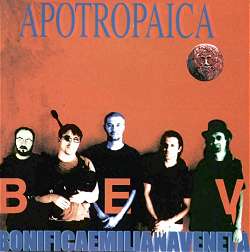 On the other hand, one cannot neglect the fact that three of the five musicians forming the BonificaEmilianaVeneta (BEV) were also the three quarters of La Piva Dal Carner, one of the best groups who have entered the Italian roots music scene in the nineties.  From this perspective BEV means the end of the La Piva Dal Carner project, after two great recordings: La pegrŕ a la mateina la bčla e a la sira la bala (CGD-Robi Droli, 1995) and M'han presa (Felmay-Robi Droli, 1997), both recorded and mixed (as for Apotropaica) by Kaba Cavazzuti and Andrea Rovacchi in Reggio Emilia, and the collaboration with Coro delle Mondine di Correggio in Mondariso.  So maybe some words about La Piva Dal Carner are not out of place to understand the developments behind BEV.

While the choice of instruments remains more or less the same over the years, what is becoming evident with the two more recent CDs is their distance from La pegrŕ's original approach to the traditional repertoire.  This first record from La Piva Dal Carner was voted best 1995 CD by the Folk Bullettin magazine and had a remarkable impact in presenting the traditions of the Po Valley with a blend of ancient and modern instruments allowing an outstanding continuity in their arrangements of traditional and new compositions (such as Arlequin by Rizzo and Simonazzi), and also including a cappella singing, for example in their rendering of Quando anderai in Maremma.

Apotropaica, the new CD by BEV reinforces the impression provided by La Piva' second and last CD M'han presa: the traditional material is still a major source of musical ideas but the main focus is a more modern song format.  Apotropaica is a term for what keeps bad luck away, and traditionally involves the use of certain kinds of masks and disguised speach.  The CD includes eleven tracks equally divided among traditional songs and new compositions, well exemplified by the third track and by the tenth track, both of them medleys.  The third track includes the 'call' part of a passemezzo from the Appennino Mountains of Reggio Emilia and a waltz by Mottaran, Passemezzo dal me amor / 1050 KM West.  In a similar way, the tenth track is dedicated to the apotropaica rituals and it squeezes a traditional gig in between two new compositions with plenty of room for the piva (bagpipe).  Quite timely and beautiful is BEV's rendition of a traditional song from Verona which ends the CD, Il disertore (The Deserter) showing the vocal skills of BEV's musicians.  It remains to be seen (heard) whether Paolo Simonazzi, the only member of La Piva not included on BEV's CD will respond to his ex-musical mates with a new project and with songs and dances of the quality of La pčgra ...  In the meantime, Apotropaica is certainly an enjoyable way to tune our ears to the repertoire of the Po Valley.