Before I go any further, I must confess that I admire this CD greatly, and for quite a number of things.  Firstly and most importantly because it presents English music and song as exactly that - and not some strange Celt-esque sub-species, which is what, to my mind, so many of the new, younger players seem feel is required these days. 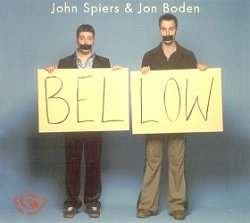 Secondly, and almost as importantly, because it features a singer who is prepared to take a few chances, most of which come off well.  And you have no doubt that Jon Boden means what he sings and (in most cases), understands what he's singing about.  No questions about 'relevance' here!

Also, it's rather nice to find a record of English material on which the musicianship stands up to the closest technical scrutiny and happily bears comparison with that found on modern Irish and Scottish CDs.  Not that this usually bothers me too much, feeling as I do that the totality of the musical experience is far more important than mere technical expertise.  Nonetheless, it's good to find that when the latter is present, the former is as well.

Further, I like the fact that they are largely content to record what they actually do, without feeling the need to wheel in half a dozen extra musicians.  How many supposedly 'solo' records actually feature a large band of the performer's musical friends and/or gurus?  Here, Benji Kirkpatrick adds a light guitar or bouzouki backup on four of the instrumental tracks, but it's never intrusive.  I'm also happy to find that this new CD is a step forward from its predecessor (now some three years old), and that the step has been in what I consider to be the right direction.

And if all that weren't enough to endear it to me, John and Jon - on this CD, at least - manage not to do a number of things I often find intensely irritating.  The first is that they do not feel the need to add the seemingly obligatory instrumental coda to the end of a serious song which has made its point and finished.  How I wish so many other and far more experienced singers would eschew this irksome practice.  Secondly, they play a tune long enough to do what they want to do with it, and then change to another one.  On far too many records, a set of dance tunes is extended well beyond its die-by date, to absolutely no purpose.  Finally, one of the characteristics of their music is a decided 'grunt' to its rhythm - they attack the lead-note of a phrase with considerable vigour.  Memories of Gloucestershire Old Spot's battle cry "Bags of Swank" come to mind.  However, while this trait, over-employed, can prove to be somewhat tedious (it was in the live set I saw at Sidmouth), they have it nicely under control here, and the light and shade throughout the 12 tracks (58˝ minutes) is very well balanced.  While there's plenty of slower and serious stuff here, the whole CD comes across as bright and punchy - indeed, Mrs Stradling has suggested that 'Con Brio' might be an appropriate subtitle.

When writing about the necessity for critical appraisal of records sent for an MT review, I said 'Also worth remembering is the way in which small flaws in an extremely good piece of work stand out far more annoyingly than they would in a mediocre one.'  Accordingly, I must raise a couple of critical issues regarding this generally excellent CD.  The first was hinted at earlier when I said that 'You have no doubt that Jon Boden means what he sings and (in most cases), understands what he's singing about.'  The exception, to my ears, is the song Copshawholm Fair.  This little-known song, found in northern England and Scotland, is a fairly ordinary item which recounts the goings-on at a country hiring fair, with a little hanky-panky thrown in to add a bit of spice.  However, here it's subjected (sorry Jon, but it's the only word) to a treatment which might be considered more appropriate to the unfolding of a huge and dramatic maritime tragedy with waves rearing over the foretops and the quarterdeck running with gore.  Bold Henry Martin could just about stand this treatment - but Copshawholm Fair?  I hear the noise and I hear the words, and I wonder exactly what it is that I'm missing.  This track proves a disquieting experience.

The other criticism results almost entirely from my own personal tastes, and so might not truly be considered a criticism at all.  However, I do think that track 4, John Spiers' own tune The Dawn Chorus, feels very much out of place here.  It is a perfectly good example of a modern tune written in the sort of style which would fit seamlessly into the repertoire of any number of modern English bands.  But that doesn't appear to be what Spiers & Boden are about - and it's certainly not what this CD sounds as if it's about.  It was the first track on which I noticed how good the musicianship was - never a healthy sign!

But, 10 out of 12 is a pretty good score, and I'm certain that no MT reader would regret buying it.  More than liking it, I admire it - and I don't often say that of a current release.  It's taken a hell of a time, but are we at last seeing the emergence of some performers of stature on the English folk scene?