Queen Among the Heather
Scots Traditional Songs and Ballads

A new record of Belle Stewart?  No, not quite.  This is a re-release of the 1976 Topic vinyl of the same name.  In fact, everything about it is the same (I believe, my copy having gone walkabout some years ago), except for the fact that it is now issued here on CD by Greentrax.

Of the rightly famed and much loved Stewarts of Blair, Belle stood at the pinnacle of excellence. 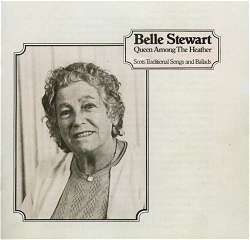 Sheila always had the ability to pull the heart strings which she has now developed into a relentless tour de force; Cathie, always my favourite, was the epitome of pub singing - often leaving far greater singers, including her own family, standing - but it was Belle who gave the songs a dignity that others, including Sheila who in some circumstances sounds eerily like her mother, can only aspire to.  In any gathering that included the three women and Alex, the father, piper, butt of jokes, and mainstay, the unstated deference was always to Belle.

The eponymous opening track sets the tone for this CD.  It is beautifully sung, in Belle’s considered and thoughtful manner.  There are no tricks here, just a consummate storyteller letting the tale tell itself.  This song has become rightly popular in recent years; could singers now be urged to return to their source, if indeed it was Belle, so that they can try and capture the spirit that she has, that spirit that is now so much vaunted by Sheila as the elusive ‘coniach’.

Here’s a Health to All True Lovers is sung in much the same manner.  According to the notes, this is a mixture of the standard nightvisiting song, so loved by travellers, and The Lover’s Ghost, although here the girl is visited by her lover, not by his ghost.  It should be noted that other travellers with nothing like the completeness of Belle’s text, make reference to death: in Ireland Mary Doran, recorded for the BBC in the 50s, has a very fragmented version which manages to encompass the line ‘I wish I had you laid in your coffin, and satisfaction upon your shroud’.  This may be from a floating verse or from another song that I’ve never heard, but equally it may make reference to a long forgotten ‘supernatural significance’.

Geordie MacIntyre in his useful notes suggests that ‘The night-visit custom ... has its basis in the consummation of marriage, with parental approval on the evening before the wedding day.’  This is not a custom that I have ever encountered in British songs, but having just returned from Italy where I saw a 600 year old carnevale ritual, one of many based on the peasants rebelling against the lord of the manor’s use of droite de seigneur, where the lord had the absolute right to deflower a young man’s bride, I wonder if the ‘night-visit custom’ might not have been a way of thwarting the aristocracy.

The first up-tempo track is Betsy Belle, that song that was so much Belle’s signature -

although to be sure there was never any doubt that Belle had always been sassy and beautiful and would never have had any trouble ‘catching a man’, unlike poor old maid Betsy (sound clip).  This bright, bold funny song was apparently learned from a songsheet purchased in Dundee in 1912 (which would have made Belle only 6!) and then Belle and her brother Donald McGregor put the words to this Harry Lauder tune that seemed so obviously made for it.  Although Belle learned her songs from many close and distant relatives, it was Donald, fourteen years her senior, who seems to have loomed particularly large in her life.  Donald learned many of his songs from the father who died when Belle was a few months old, so he became her musical mentor, and possibly something of a father figure.

The Soft Country Chiel is a song from her brother, unusual in that its subject is amusing, ie. simple country man duped by sophisticated townie, but its tune, apparently a variant of The Hills o’ Glenorchie, is beautiful and moving when sung by Belle, without the usual stompingly bellowed chorus.  This is that same notorious chorus which Ewan MacColl, that well-known Scot, so famously transformed from ‘I wish I was back aince mair in Dalry’ into ‘I wish I was back in Smerindalrye’!  This is a song with plenty of pleasing examples of the countryman’s humiliation, and the simpleton's harshest response, sotto voce, is merely ‘Bad scorn to her breed’ - ooh, I do like a well-turned insult.

There are several indications of Belle’s musical craftsmanship on this record.  Until the advent of Voice of the People I believed that the only song she had ever written was The Berryfields of Blair and surely it was skilfully enough crafted to have entered the tradition whilst its provenance remained unknown for many years, until Hamish Henderson, himself a native of Blairgowrie, and Maurice Fleming, of the School of Scottish Studies tracked down the author and her talented family in 1954, and thus was born the legend of ‘The Stewarts of Blair’.  Unfortunately, although Whistling at the Ploo might be excused as ‘the quickest one I ever made up’, it truly hasn’t stood the test of time; the song is an indication of the impact of the twentieth century on farming, but it is nothing like strong enough to overcome the embarrassing 1954 references to Teddy boys and skiffle groups. ‘Nuff said.

The Bonnie Wee Lassie Frae Gourock is another ‘light’ song learned from a songsheet purchased at the ‘The Poet’s Box’ in The Overgate in Dundee.  The song The Overgate is another tale of a ‘saft country chiel’, a kind of Tailor’s Breeches with many a fine turn to tune and story.  Apparently this area of Dundee, as well as being a good place to seek songsheets, was ‘famous for its brothels’, and yet when the poor gawp who’s been duped complains: ‘I’ve lost my waistcoat, my money and my purse', she says 'I’ve lost my maidenhead and that’s a damned sight worse’!  A splendid irony indeed.  This song is a fine companion to Betsy Belle, light, funny, and made funnier when the protagonist is so at variance with the performer, who is so obviously a person with all her wits about her.  These two songs over the years rightly took their place at the forefront of Belle’s comic repertoire, and yet both are sung with a remarkable restraint that most singers would find very difficult to maintain with such material.

On this rather oddly balanced record most of the weightier songs seem to be bunched at either end.  Accordingly, the final ‘stretch’ opens with Blooming Caroline o’ Edinburgh Town, far shorter now than it seemed to me in the late '60s when Belle’s singing of it first had me so seduced.

That I remembered this fine, but quite simple, song as a monumental ballad probably says quite a lot about Belle’s elegant and dignified performance. (sound clip)

Busk, Busk Bonny Lassie was learned from daughter Cathie’s mother-in-law, Charlotte Higgins, and is sung in a lilting but stately manner, rather than the ‘funeral pace’ that the revival seems to have endowed it with.  All of the Stewart family have sung this at various times; my preference is still for Cathie’s singing of it, but that is certainly not for of any lack of quality in her mother’s performance.

Late Last Night is one of the ‘many versions ... scattered throughout the British Isles’, but the text and tune most closely resemble The False Bride that Daisy Chapman of Aberdeen sang.  It is a truly lovely short ballad, shorter here than in Daisy’s version, but the simple words that express the husband’s anguish are as moving as any to be found in the highly crafted poetry of the big ballads:

Annie, dear Annie, I knew you never loved me,
Your love and my love could never agree,

For I ken fine that I’d taen you fae a better,
Aye, fae a better than ever I could be.  (sound clip)

This is an unusual insight into the feelings of the cheated husband, who usually hardly gets a look in.  To be sure, the song is not so substantial or satisfying a tale as Daisy Chapman’s, but the husband’s despairing words will live with me for a long time.

While we’re on ballads (I said this was an oddly balanced record) The Twa Brothers is the big yin here, with Belle singing it in the certain knowledge of its greatness, but without falling into the Jeannie Robertson trap of seeming to believe that the singer is more important than the song.  A superb rendition of this superb tale, one of her father’s favourite songs, learned from her brother Donald. ‘It always appealed to me ... I only had two brothers who lived out of a whole family of nine ... two sisters and four brothers died before I was born’.

The final track is the ever satisfying Leezie Lindsay - a love story that turns out well, and a hugely singable tune - the perfect track for the car.

I would have, should have, liked this CD enormously ... but (I don’t know how this has been achieved) it’s dull.  Usually the change of format, from vinyl to CD, enhances the quality, but here the converse seems to have happened - though certainly I may have misremembered the original.  Everything sounds a little flat - and the tiny breaks between tracks are hideous; one needs time to absorb a piece of music before being bombarded with another.  Geordie McIntyre’s notes are splendid - well written, well informed, interesting and useful, but they certainly cannot rescue this (only slightly) flabby production.

It’s cheering to know that Topic intend to release a new recording of Sheila Stewart, one of the very few remaining Scottish traditional singers in the prime of her life.  Let us hope that her power and passion will be caught in the studio and translated to disc, unlike this rather limp CD.  It may seem that I am being rather harsh, after all it’s not actually bad, but given that this is the great Belle Stewart, on good if rather pensive form, it just will not do.  In these days of wizzo technology that can do anything, it’s simply not good enough to think ‘any record of Belle Stewart is a good one because it’s her’ - it’s almost like cashing in on her demise to release this less than excellent CD, as a memento.

I can see two possible ways of mitigating the effect of this rather inferior recording, ie. preventing it becoming what future generations believe this legendary singer and personage was about:

Since no-one can now go out and record Belle, to produce something as impressive as Jane Turriff’s Singin’ is Ma Life, there may yet be a possibility that someone out there can gather together gems from various collectors’ private recordings and give the deserving public a resoundingly glorious and worthy Belle Stewart memorial.

OR, and this is the obvious, and apparently imminent, one - Rounder might ride to the rescue!  I am holding my breath for the new Belle Stewart CD from Rounder/Lomax which, if it’s anything like the quality of the splendid Margaret Barry I Sang Through the Fairs, with field recordings and personal interviews, might be exactly what is missing.