Margaret Barry - I Sang Through the Fairs

This is a most wonderful new record of Margaret Barry, recorded in the 1950s when she had a beautiful pure clear voice which was much altered by the time most of her recordings were made and she was presented to the wider folk world. 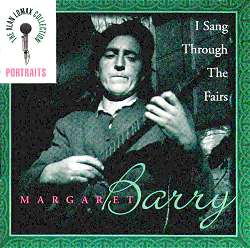 My first encounter with her was circa 1963 when she blew me away, but this summer I heard a recording of such beauty that it reduced me to tears; this was the great Barry recorded by Bill Leader in The Bedford in Camden Town in 1958.  It turned out that the recording was She Moved Through the Fair as it subsequently appeared on Voice of the People 10, Who's That At My Bed Window?  Little did I think that soon enough a whole CD of even earlier recordings would come my way.

After much consideration and mind changing, I feel this record's worth truly is 'far above rubies'.  Obviously the deliberation means that I still have mixed feelings, but I will deal with the certainties first, the qualms will come later.  In some ways this is the perfect recording of a traditional performer - some stunning, varied performances in a variety of settings, plus very detailed frank discussions of her personal life, her philosophy and her music.  Indeed, the interviews show Lomax's remarkable ability to put his friend at her ease and encourage her reminiscences.  Ah, if we only had records of this quality and inclusiveness of all the heroes of our tradition, what might our understanding be?

Lomax first met Barry in 1951 after Sean O'Boyle had seen her busking in Dublin and 'alerted Lomax in time for his Irish field trip of that year'. 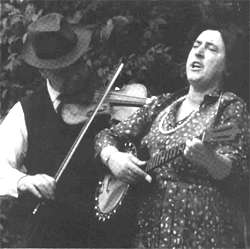 Lomax and his assistant Robin Roberts met and recorded her in Dundalk and started a long relationship which strengthened when she visited him in New York and finally came to his flat in London 'to be a sort of housekeeper cum cook', and where she made most of the recordings on this CD.  Michael Gorman, the man who was to be her long-term musical partner, was introduced to her by Lomax when he presented them both as part of a 1953 BBC television programme of traditional singers and musicians, and rightly he has a place (though rather small) on this record.

The CD opens with the perfect performance of My Lagan Love (sound clip) which just grabs your vitals and there is nothing more to be said.  The wonderful voice, the stunning technique, the overwhelming power of this track

make it what may be the most moving on the CD.  All the expected titles are here, including a rare unaccompanied Flower of Sweet Strabane (sound clip) recorded by Peter Kennedy, and some which (like New York) were obviously so good that they had to record them twice.  This phenomenon is more understandable in some cases than others: track 15 is Barry's incomplete Waterloo ballad, Her Mantle So Green, sung with fine consideration and clarity, but in an unusually restrained manner, whereas track 24 (yes, you get great value, too!) is the same song, and the only 'live' performance, together with Michael Gorman in The Bedford.  Necessarily, the recording is much more 'distant' than the first version, and the singing is more forced to get through the crowd, which means that the stunning vocal clarity is lost.  But it's certainly none the worse for that; it is equally moving in an entirely different way.  So, justification for two versions of that then.  What can be said of She Moved Through the Fair?  The performance for Lomax on track 7 is glorious, in fact a showcase for her clear lovely voice, BUT there is a verse missing (minor point) and there is dreadful distortion on final verse (unforgiveable, given that there is a better Kennedy recording at track 21).  The singing for Kennedy is harsher, more dramatic, more chilling, much closer to the 'street' singing for which we know her.  Since we are given both performances, they must be compared (odious or not).  For me, the second performance is the superior.  This will obviously be open to opinion, but that's mine!  I think I have justified the inclusion of two 'Mantles'; what can the reason be for two 'Fairs'?  My live-in adviser suggests that track 7 is there because it was recorded by Lomax.  And to be honest, and possibly a little picky, there is a slight feeling, particularly in the notes, that this may be as much a King Lomax showcase as an honest and invaluable portrait of the younger Margaret Barry that too few of us knew (more of this to come under 'qualms').

Unusually, there is some highlighting of her musical, as opposed to vocal, ability.  Breakdown is an instrumental, 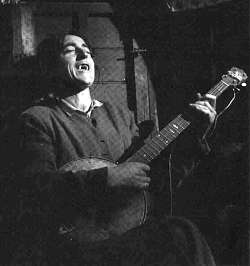 which is interesting if only because her solo banjo playing was rarely heard, and also because so many have so derided it.  To me as a firm non-musician, this is inextricably part of the phenomenon that is Margaret Barry.  It is surely not to be listened to as a solo instrument (as this track will demonstrate), but it seems to have always been an essential accompaniment to the songs.  'And there's music coming into my head' is an interview track

where she explains how the jig The Strayaway Child (sound clip) formed in her mind; her lilting of the tune fades into a fine recording of Michael Gorman playing it.

The other guest performance follows her singing of Going to Mass Last Sunday to a small group of singers at Lomax's flat.  Jean Ritchie responds with Lovin' Hannah.  I am minded to say "So what?  Why not include instead Jeannie Robertson who was also there?", but then I remember this is an American record primarily for an American public.

Of the other songs, all categories are represented: the upbeat Blarney Stone variety, the sentimental Ballyjamesduff variety, and the more 'classic' ones from the recordings of Count John McCormack (supposedly learned whilst standing in record shop doorways).  The interviews are quite revelatory.  On first hearing, I thought that some of the five interviews were just Barry saying what Lomax wanted to hear, using those innate tinker skills which ensure going to bed on a full belly.  Listening more closely, I have been fascinated and very moved by the simple and believable snippets of life story.  There is obviously embroidery in her words, but that's what poetry is, and as there was consummate poetry in her performance, so there necessarily must be in her tale telling.

Now to the major qualms which I will dispose of as quickly as possible.  The notes are credited to Matthew Barton, but be aware that so also are the compilation, research and editing.  A quick run through the most enjoyable gaffes in lyric transcription should be enough to give a flavour of how much research has been undertaken.  It will be well understood by all MT readers that Margaret Barry's Cork accent was difficult and often impenetrable, and that she was given to what Robin Roberts rightly describes as 'malapropism' - note "a sociable" for a social gathering - but if one has done research the following are inexcusable:

The Blarney Stone - starts correctly, 'Twas on the road to Bandon' but by the last verse he's forgotten and ends 'kissed the blooming roses and abandoned Blarney Stone'

My Lagan Love - 'And like a love-sick lemon, she has my heart in thrall'

This last is my favourite, though to be fair it's the one that has always given the most trouble, particularly to non-Irish speaking listeners/singers.  This song was recorded by John McCormack, and while the Irish word is always given phonetically as lenanshee (or something similar) it is both recognised as an Irish word, and more importantly in the public domain and readlily available to any researcher.  I am only a bloody reviewer but my research turned up 'leanain sidh' (or leannán sí in modern spelling) which means fairy lover, or perhaps ghost or spirit lover.  What Barry sings is 'lenasee' which might mean that she went off to find out what the word was and found it written down in Irish.  There is worse to come, but I will allow you to discover these gems for yourselves.

Yes, Margaret Barry's strong and often idiosyncratic speech was difficult to understand, but a modicum of familiarity and sympathy, neither of which this guy has, would help hugely.  Many errors are due to lack of knowledge of Irish heroes (Sarsfield), or places (Crossmaglen), which would have been very easily remedied by a glancing at a history book, listening to other songs, or even opening a simple roadmap.  It is not only in the songs that he fares so dismally; there are some mistranscriptions of the interviews which alter the meanings to their diametric opposite.  How ever did Matthew Barton get this job?  Perhaps he was the only person who'd do it for the money, or total lack of it.  Perhaps he's married to the boss's daughter.  In any circumstance slipshod notes are irritating; when there has been so much vaunting of this series as serious academic material it is insulting and utterly unforgiveable.  The Portrait Series is part of the Alan Lomax Collection, of which there are 100 CDs - I wait in some trepidation!

Finally, while the presentation is cheap and shoddy, there are some great pictures, with and without teeth, and this is without doubt a wonderful, very important record.

Addendum: I would like to thank everyone who has contributed words of wisdom on leannan sidh. Kind and thoughtful as you have all been, I think as an inveterate non-Irish speaker, I would like to draw a veil over the whole thing now.