The arrival of four CDs of Italian Banda music within 5 weeks of each other is either a profound coincidence, or evidence of some sort of craze in the world of 'world music'.  The press releases accompanying these records would have me believe that the latter is the case - a craze sparked in this instance by the popularity of Kusturica's film Underground, which features the music of a Balkan brass band.  Needless to say, this is yet another facet of modern popular culture which has, sadly, passed me by - though I've had the film recommended by several friends and am awaiting its appearance at a Gloucestershire cinema with enthusiasm, if little optimism.  Oddly, none of them mentioned the music.  Perhaps they detected little difference between it and the English brass band music with which they were all familiar.

That is rather the case for this reviewer - who must admit to being no aficionado of either the English, Balkan or, in this case, Italian forms of the genre.  The Banda Sonore are from Chianciano Terme in Tuscany and play in a style, and produce a sound, which will be instantly familiar to British listeners.  The banda on the double CD are from Ruvo di Puglia, near Bari in Apulia, high up the 'heel' of Italy,

and certainly have a more foreign sound - though not markedly so.  Banda Ionica, on the other hand, are from Sicily, and from the first notes of track 1 you are, beyond any shadow of a doubt, in another country.  (sound clip - Per Domenico Morelli).

Perhaps a step back is appropriate at this point, to deal with the Banda tradition and its place within these pages.  For over one and a half centuries the Italian brass band has developed, flourished, and declined, as it has in so many other countries across the globe.  Nowadays, its function falls mainly within the processions and rituals surrounding the Holy Week celebrations, particularly in the southern parts of the country.  As elsewhere, it has been mainly a product of the working people, and has acted as a training ground for musicians who have gone on to make their mark in other spheres - the concert-hall, jazz, dance bands, folk music, pop and, of course, the military bands.

A particular function of the traditional Banda was to bring the music of the Italian Opera and Classical fields within the reach of the poor and the isolated.  Many communities which were geographically cut off from any possibility of a visit to an Opera house - even if they had been able to afford an entry ticket - were able to share in the musical life of their country at a time when it led the world.  That their experience was at second hand and in the form of cut-down excerpts of the best tunes from Verdi, Puccini, Bellini and the like, did not diminish their pride, nor reduce the nation-building potential which such music clearly exerted.

Alongside this 'cultural' function, many bande also became involved in the music making which has always been such an important part of the rituals of the Catholic church.  This was inevitable, since so many of the members would already be participating in some way.  The banda music lent itself well to the pomp and solemnity required of a funeral procession, and great numbers of funeral marches were composed for this purpose, both by the local bandsmen and by nationally known composers of the day, whose work is now almost forgotten and lives on only in the repertoire of the banda tradition.

As time went on, the role of the banda became linked most particularly with the rituals and processions of Holy Week, and the funeral marches were seen as the most appropriate music for this function.  The interest in Opera declined along with the need for a local source of the music and, by the 1980s, most of the extant bands existed solely as folk/ethnic elements of the Holy Week rituals.

Of recent years, it would appear that a number of jazz and pop luminaries have discovered the banda as a new and colourful pallette to work with - hence, one would assume, the current surge of interest.

Turning to the CDs under discussion, the one of the Tuscan banda and jazz guitarist/composer Battista Lena, seems, to me, the least interesting.  For a start, we are told almost nothing of the band itself other than its town of origin and the names and instruments of its members.  The music is entirely modern and composed by Lena himself, and the playing style - at least on this record - seems to have little of the flair one might hope to find in a traditionally based ensemble.

Even viewed as a jazz record, I don't feel that the banda element has been much exploited - being used mainly as a rather simple backdrop to features from Lena's group's soloists.

The double CD from Apulia is far more interesting in its use of the banda as an integral part of the compositions played by Pino Minafra and his group of Italian, French and Dutch jazzers.  In particular, mention should be made of the singer,

Lucilla Galeazzi, who in other circumstances leads her own quartet, working on 'reinterpreting traditional Italian music'.  She is a gorgeous singer and, on this evidence, her reinterpretations should do little damage to the songs (sound clip).

The first of the two discs is made up entirely of the 'Opera concert' repertoire mentioned earlier, and so is traditional in a very real sense.

That notwithstanding, five minutes of Toreador, or any other of the 'top tunes' (sound clip) can be pretty tedious, and one realises exactly why a Readers Digest version of a classic novel can never be any substitute for the complete work. 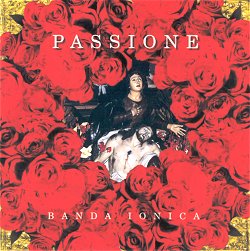 It's also unfortunate that all four of the soloists in the band play flugelhorns, albeit of different pitches, so that the 'high spots' of the pieces all have a similarity of tone and colour which does little to reduce the tedium.

The Sicilian record is another thing altogether - and, being composed entirely of funeral marches, makes for an interesting comparison with the Trauermärsche disc also reviewed here.  I suspect that the music's association with the Holy Week rituals has lent it a level of high emotion (devastating sorrow coupled with the expectation of redemption and rebirth) which might have been lacking in its earlier guise.

Turned up as loud as the neighbours will stand, it really does make wonderful listening - try the start of Una Lacrima sulla Tomba di Mia Madre for size (sound clip).

Another interesting aspect of these three recordings is that the two least 'traditional-sounding' bands (those from Tuscany and Apulia) are actually traditional, whilst the Sicilian ensemble is made up of musicians drawn from four other bande

(albeit traditional ones) and brought together specially for this recording, and directed, by two members of the Turinese pop/punk/folk group Mau Mau.  What this tells us about my, or their, musical tastes I'm not quite sure!  But they do make a glorious noise.  (sound clip - Ai Miei Genitori ).

The Dunya disc is from our old friends Felmay (get to their web site through our Links page), whilst the second two (three) are available via New Note Distribution (tel: 01689 877884).