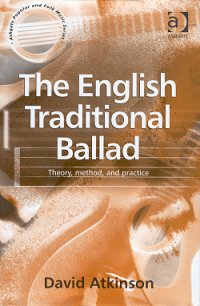 This is an exceptionally detailed and generally fascinating book.  It deals principally with English ballads, but not without frequently referring to their parallels in other Anglophone traditions - and elsewhere, too.

As might be expected, there are initial and final chapters with titles:

But for your present reviewer - not by any means a ballad scholar - the remainder were something of a surprise: I need not have worried - the themes do in fact link up fairly well, and the titles do not rigidly impose upon their content.

Atkinson focuses on some of the most interesting problems in ballad studies: the 'wit-combat' in versions of The Unquiet Grave; variable perspectives in comic ballads about marriage; incest as a ballad theme; problems of feminine motivation in ballads like The Outlandish Knight and Broomfield Hill; murder ballads and murder in other instances of early popular literature.  Through discussion of these issues and themes in ballad texts, the book outlines a way of tracing tradition(s) in English balladry, while recognising that ballad tradition is far from being simply chronological and linear.

So runs the blurb, and I can't fault it for a good precis of the work.  Being part of Ashgate's Popular and Folk Music series may mislead the casual reader, for it is very academic in approach and, like a good academic, David Atkinson rarely proposes any idea without it being hedged around with maybes and perhapses.  This tends to leave the general reader, like myself, rather unsatisfied at the end of it - few, if any, conclusions seem to have been arrived at along the way.  You will note that the frequently encountered Some Conclusions chapter is missing from the list above, and that the final one, An English ballad tradition?, ends with a question mark.  It might also be helpful to point out that the 'practice' in the subtitle refers to the practice of ballad scholarship, not that of ballad singing.

Like Professor Child, David Atkinson rather shies away from giving any clear definition of a ballad.  He says: 'Balladry is envisaged here as an expansive genre, part of a continuum of folk song with a more or less explicit narrative element, which certainly embraces songs that for good historical reasons were not included by Child, and which accordingly does not seem to demand strict definition.'  This sounds fair enough, and implies that a good number more than Child's 305 ballads will be included - except that his Index of Ballads and Songs contains only about 360 items.

Having completed the book I was, of course, left with a number of further questions I wanted to ask.  The first of these was - Why?  As someone whose song repertoire is at least 70% ballads, I have to admit that few of the areas of discussion covered in the book have ever seemed particularly problematic when considering learning a new song, or working on it to get it 'right' for me.  For example - should I one day wish to learn a version of The Outlandish Knight, I don't imagine I will be overly concerned about which other songs feature talking birds, or precisely which model role they fit in to.  I suspect that I will be merely pleased that the part which could so easily been played by a servant or maid in this ballad, is instead played by such a colourful and unusual character as a parrot.

I was also a little confused as to for whom the book was primarily intended.  If academics, as I assume, then why does the author need to outline the plot of a number of very common ballads in such detail?  I'm no ballad scholar, but I was familiar with almost all of them.  But, at the same time, many others are mentioned by title alone, without any further information, as if the reader may be assumed to be completely familiar with them.  Speaking for myself, I'm not particularly familiar with Earl Brand, Young Hunting or Child Waters, of example, yet these and many more are merely cited, without any plot explanation.

I suppose it's inevitable with a book like this that the general reader will notice pieces of information relating to the few topics s/he's already familiar with - so I noticed, for example, that several of the Musical Traditions CDs get mentioned in the text and that many appear in the Discography.  But not all; the George Townshend, Wiggy Smith, Daisy Chapman and Mitchells CDs don't appear, even though all contain ballads.  In his preface, David Atkinson mentions that it has been necessary to double check some sources 'where there are particular grounds for suspicion', so I was sorry to read that 'At the Butley Oyster pub in Suffolk, 'Tinga' Ling sang ...' a version of Our Goodman.  This information comes from the notes to Neil Lanham's NLCD3.  As I have pointed out elsewhere, since most members of the Ling family have been nicknamed 'Tinga' at some time or other, it seems a considerable discourtesy not to give the man his own name - particularly when it wouldn't have been too difficult for Lanham to determine which of them was likely to have been singing this song in The Oyster in 1967/68.

To conclude, this is a fascinating book, particularly if you already have an interest in ballads.  Some of it will, I think, be too immersed in the minutiae of ballad scholarship to hold the attention of a general reader for very long, but - as with most things - a little extra effort brings its rewards and there's plenty here which is very worthwhile and enjoyable.  The extent to which I feel it is worth the È45 price tag is rather more debatable!