The Swansea Hornpipe; Greensleeves; Haste to the Wedding; Flanagan's Ball; The Girl I left Behind Me; The Irish Washerwoman; The Liverpool Hornpipe; The Wonder Hornpipe; Napoleon's Grand March; The Old Brags; Old Towler; Fisher's Hornpipe; Off She Goes; Bonnets so Blue; The Coleford Jig; Tite Smith's Hornpipe; Untitled Polka; So Early in the Morning; The Cock o' the North; Soldier's Joy; The Gypsy Hornpipe; The Flowers of Edinburgh; Rory O'More ; The Old Fashioned Waltz; The Winter's Night Schottische ; The Polka Mazurka; Pop Goes the Weasel; The Cross Schottische; The Heel and Toe Polka; The Varsoviana 2; The Varsoviana 1; The Morpeth Rant; Highland Fling 1 (Moneymusk); Highland Fling 2 (Keel Row); Cabbages and Onions; Pretty LIttle Dear; Just as the Tide was Flowing; Anywhere Does for Me (song). 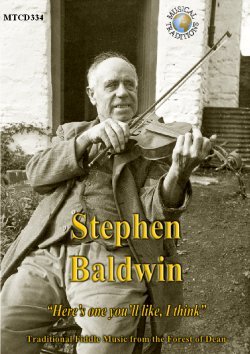 When I heard that this CD was in the offing I naturally thought that it was a good idea.  The Leader album of Stephen Baldwin has long been unavailable.  It's scandalous that source material such as this becomes unobtainable and any re-issue is welcome, although this is scarcely a re-issue, consisting as it does of the bulk of recordings made by Russell Wortley, touring with the Travelling Morrice, in 1954, and those by Peter Kennedy in 1952.  Nevertheless I wasn't overly excited because the original vinyl still sits on my shelf, I hadn't missed playing it since junking my record deck and I remembered Stephen Baldwin's playing as being interesting, but a bit scratchy and recorded when he was past his best.

Well, the recordings haven't changed but my perception surely has.  Certainly the playing is a bit scratchy, but it contains a magic that I missed first time round; my experience of and interest in English fiddling being less then than now.

The first thing that strikes me on re-acquaintance is the rhythm that is contained in the playing.  There is incredible subtlety there and much to be learned by careful and repeated listening.  Ignoring the occasional unevenness due no doubt to aging limbs, it's not difficult to hear the messages of rhythm coming from a lifetime of playing.  The second striking thing is the intonation.  What might be perceived as inaccuracy is replicated every time through and much like fiddler Henry Reed of West Virginia there is a feeling that the micro-tonal qualities of the playing are actually a very important part of the makeup of the sound.  Add to that the modal oddities like the sharpened fourths (natural on the way up and sharpened on the way down) and there's much food for thought.

The repertoire is extensive with 37 tunes and one song represented, totalling, with the repeats, 59 performances.  It consists mainly of the titles we can see in mid 19th century fiddlers tune books seeded with the later waltzes, polkas, varsovianas and schottisches.  There are some interesting variations of title but this is very often found with such musicians, with hornpipe names in particular being interchangeable.  One wonders though how King of the Cannibal Islands ended up with Baldwin as Cabbages and Onions.

We've come to expect comprehensive notes to accompany Musical Traditions releases and there is no disappointment in this respect.  Philip Heath-Coleman has done a first class job and the information includes interesting and extensive comment relating to morris, country and step dancing and to tune type.  Baldwin's style has been been subjected to some comparative analysis with other players and three tunes have been notated with bowings and tunings.  There is comprehensive geographical background, there are 13 photographs included and, unusually, some comment on the recording process.

The team who collaborated in assembling the package of information consists of Rollo Woods, Paul Burgess, Keith Chandler, Bill Leader and Reg Hall.  No wonder it's first class!

Stephen Baldwin is amongst the most important sources of fiddle music in the world.  He belongs alongside Henry Reed of West Virginia and Charlie Batchelor of New South Wales, two fiddlers whose recordings connect us solidly with our musical past.  This assemblage is required listening and reading for anyone who professes to have an interest in English fiddling or English traditional music.  In the words of the title "Here's one you'll like, I think".  Well done MT.

[The Library of Congress has a website devoted to Henry Reed.  Called Fiddle Tunes of the Old Frontier: The Henry Reed Collection, it has 184 sound recordings, 19 pages of fieldnotes, and 69 musical transcriptions, and much more besides.  The site is at: http://memory.loc.gov/ammem/hrhtml/hrhome.html]
Site designed and maintained by Musical Traditions Web Services   Updated: 29.8.05