More Tunes About Baggage and Hills 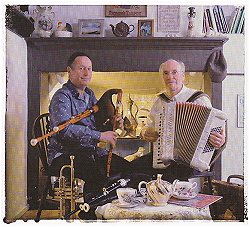 I was sent David Faulkner and Steve Turner's previous CD, English and Border music for Pipes, back in 2004 - and liked it so much that I sent it off to Eliza Carthy for a review ... and she liked it as well.  Before I relax my grip on a CD I like I usually make a copy of it ... sadly though, I can't find any such copy today (and Eliza promptly lost hers) so it's rather difficult to know how this present one compares with their earlier release.  But memory tells me that I don't enjoy this one as much.

It's just possible that my musical experiences in the intervening 13 years have had an effect on my preferences.  Readers who have read my reviews of the work of Stefano Valla and Daniele Scurati will realise that piffero + accordion sound very much like English pipes + accordion.  The difference is that Stefano and Daniele play so regularly for dancing (they played 27 patronal feste e balli in this small area of Quatro Province in the month of August alone!).  I understand that David and Steve also play for dancing, but I can't imagine that they do so anything like so regularly - and it shows.  There's very little on this CD that give me the urge to even tap my feet, let alone get up and dance.  My band, Phoenix, play both Mount Hills and 29th May (track 2) - and I would be very disappointed if we didn't get a great deal more lift with them than is heard here.

However, this is not intended to be a dance record, and I can't deny that there are plenty of good tunes here.  I do like 3/2 hornpipes, and track 1 gives us a couple of nice ones, and track 5 gives us an even nicer one, with variations!  Track 4, At the Brow of a Hill is a truly lovely waltz, and track 8, Sawney Dear (described as quirky and rarely heard) is very interesting.

So, 45 minutes worth of interesting music ... I only wish it was played with a bit more bounce and energy.  And more than one tune about baggage would have been a bonus!