Spirit of the Border

Another Collection of music - mainly piping and fiddle - from Northumberland; like 'Northumberland Rant' compiled by a North American resident; likewise a repository of fine playing and musicianship; but as an anthology, a very different kettle of fish.

Clearly to be filed under 'Celtic' in the popular record shops, the CD is presented with a splendid Celtic-Dawn photograph of Lindisfarne, and with a somewhat over-dramatic positioning of Northumbria as outer edge territory, there's a clear implication that, although this stuff is English, it's OK to like it. 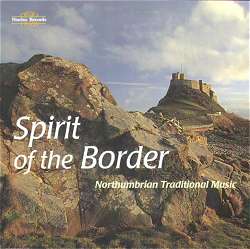 However, once the notes get going properly - having started with the contentious notion that Northumbria is the only region of England to have a discernable regional style - they are informative and useful.

The collection presents a snapshot in time of a range of current established performers playing a range of the well-known tunes of the Northumbrian repertoire, and as such is - as it is clearly intended to be - a good general introduction to Northumbrian traditional music.  The musicians were brought together over a weekend in Dunstan Hall --a popular venue for folky activities on Tyneside - and were recorded playing their pieces.  All the players are fine and well-respected musicians.  Richard Butler, Chris Ormston, Adrian Schofield, Colin Ross, Anthony Robb, Alan Jones, Geoff Purvis, Ralph Thompson and Jamie Robb - all contribute tracks, either singly or in groups - which are never less than competent, and often very good.

The trouble is, it sounds just like what it is - people wheeled in to do their bit, and ushered out the other end.  Stranded uncomfortably between a collection of field recordings and a studio session, it's difficult for the listener to know what criteria to apply.  The solo pieces tend to work best for me: the musician is in control, and Chris Ormston's solo contributions, for instance, are lovely, including a clear and graceful Bonny Pit Laddie.  (Incidentally, this is described as a Jig on the sleeve; it's usually written in 6/8, certainly, but plays as a slow 3/4 air, almost a waltz.  There are, too, other inaccuracies in the track listing of the booklet: Rothbury Hills is described as a Hornpipe - indeed is listed as Rothbury Hills Hornpipe - when it is a slow air; and on track 20 The Willow Tree / Mr Kennedy North are both described as 'Hornpipes' when there is a clear change of metre, to what feels to me like a Rant.  I mention this, not to score nit-picky points, but to note that it appears to me as a symptom of a general lack of editorial or production focus in the project.)  The solo pieces also allow consideration of individual style - Richard Butler, for example, although a senior and respected figure in Northumbrian piping circles, and possessed of fine technique, has a rhythmic style that does not always fall easy on the ear of a dance musician.

The ensemble pieces, however seem too formal for a pub session, while not tight and considered enough for a studio recording.  What else can I say, really?  These are musicians who know their stuff inside out, and go through the stuff perfectly well - but, by and large, they are just playing the tunes.

So, will you want to buy this CD?  If you're reading this magazine, probably not.  But if you want to give a friend an introductory listen to Northumbrian repertoire and style, this could serve.  I don't want to be churlish - this is not pap; but the standard of Northumbrian music available on record these days is pretty high.  So an anthology has to be pretty focused and solid - like 'Northumberland Rant' which I reviewed earlier this year - to earn its keep.