Apart from being the sister of L·nasa's Seßn Smyth and married to percussionist Jim Higgins, Breda Smyth became well known as a member of the Lord of the Dance band and still tours with this seemingly indefatigable production. 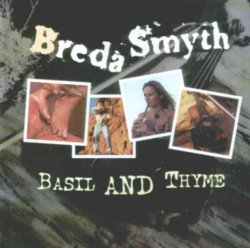 Based for some time in California, this is the first album for the tin whistler and fiddler from Galway, recorded over a period of years in, as she puts it, "too many places to mention".

This is largely a whistle album, though her fiddle does pop up on a couple of tracks, her own composition Bachelor's Walk and one by husband Jim, Rockaway Jigs.  She's also called in her markers and, as a result the album features a plethora of well-known names, including Jim Murray on guitar, accordionist MairtĒn O'Connor, Moving Hearts' bass player Eoghan O'Neill (a man with whom I spent a rather torrid two hours in what Eoghan rightly termed a "chicken-in-a-basket joint" in Holloway called The Thatch, now The Garage), bouzouki player Brendan O'Regan, Seßn Tyrrell on mandocello and harper Laoise Kelly.

It's necessary to be utterly blunt and warn readers that some tracks veer extremely close to the territory of the Afro Celt Sound System, replete with multi-tracked, percussive programming, and others are unequivocally ambient, but there's no doubting Breda's skills as a whistler, abilities especially evident on a set consisting of Morning Gallop, penned by Carl Hession, and Paddy Fahey's Jigs, where Tyrrell's accompaniment and Jim's understated drum provide a notable counterpoint to some keenly perceptive blowing.  The same also applies to the closing track, a set of Cape Breton jigs, where whistle and harp blend with uncompromising bliss.

There are sadly all too few decent Irish tin whistle recordings and, while this doesn't reach the heights of Mary Bergin's two albums or Seßn Ryan's equally accomplished pair or Brian Hughes's single outing, it does have more than enough merits to warrant repeated listening.  If it's hard to find, try Breda's website at www.bredasmyth.com