Having recently returned from an Easter visit to Bacup, with the sound of the brass band still ringing in my ears, I thought a review of the new Brass Monkey CD would be apposite. 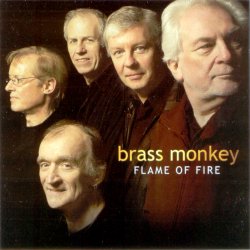 And a fine CD it is, too - harking back to the glory-days of their first, eponymous 1983 recording.

The first thing which needs to be said is that the sound is absolutely superb - particularly considering that it was recorded not in a studio but in Martin Brinsford's front room!  Ollie Knight is to be heartily congratulated.  Sadly, though, listeners hoping for a really splendid tune may be a little disappointed ... when your first record includes the two best tunes in the British repertoire, this is almost inevitable!  However, there are still plenty of good'uns here; The Queen's Birthday and Duke of Wellington's March, for those who favour the military approach, and Bill Driver's Quickstep and Billy Harrison's Father's Polka for those who prefer a more rural repertoire.  And special mention should be made of Happy Hours, showcasing Martin Brinsford's excellent mouthorgan playing - at last!  Maybe the nearest they get to their benchmark is with The Marriage Vow, a morris tune from Longborough, to which Old Spot used to dance.  The arrangement develops nicely, including a short piece of '4 against 3' time, and ending with two sets of 'slows' where the bass trombone moves into what sounds like (but isn't actually) a round.  Very nice!

It has been observed many times that the Folk Club/Festival revival scene has, over the years, developed its own tradition - different from the traditional one, but equally valid.  And it has been said (mainly in these pages) that it is necessary to apply different criteria when evaluating revivalist performances.  So it's something of a surprise that (on this recording, at least) it is Martin Carthy - who surely must be seen as the most Revival-oriented perfomer there is - whose singing is extremely pleasing to a reviewer with both feet firmly in the traditional camp.  His version of The Maid of Australia, as heard here, is an absolute delight and surely the stand-out track on the CD.  Not only has he combined two traditional texts (from Walter Pardon and Harry Cox) into a coherent whole, but he has introduced the beginning of the 5th line melody into the 3rd line.  The result is startling - and quite wonderful!  Speaking to Martin about it recently, it would appear that he was completely unaware of this change; indeed he thought it was how Peter Belamy (from whom he'd learned the song many years before) had sung it.  The unconscious folk process in the hands of a real musician!

Further, he sings this (and Flame of Fire and Limbo) in a very rhythmically free fashion, despite all of them being accompanied by the whole band.  Thus, your attention is held captive throughout some quite long songs - in marked contrast (sorry to have to say it) to the case with the John Kirkpatrick performances.  I had to ask Martin about Flame of Fire, as it was a title I was unfamilliar with.  It seems this is the alternative title (and the obvious one) to A Sailor by my Right [Roud 568, Laws P34A] collected from Mrs Betsy Pike, of Somerton, Somerset, by Cecil Sharp in 1906.  It's obviously related to The Cruel Ship's Carpenter, The Ghost Ship and, more distantly to Willie's Fatal Visit.

So, while a Brass Monkey CD is not exactly what you'd expect to find reviewed in these pages, I'm pretty sure that very many MT readers would find a good deal to enjoy here.