Fort of the Jewels 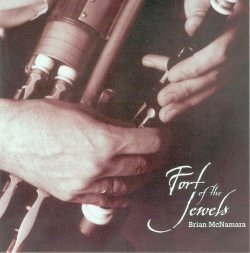 As anyone who already owns Leitrim's Hidden Treasure or A Piper's Dream will be fully aware, a new release on the Drumlin Records label is not just a musical feast, but an exploration of the traditions of Brian McNamara's native south Leitrim.

Recorded with other members of his family, Leitrim's Hidden Treasure introduced listeners to the tunes collected by Stephen Grier, Alex Sutherland and Thomas Kiernan, while Brian's first solo album, A Piper's Dream, single-handedly reinstalled the Leitrim piping tradition into the public perspective.

Fort of the Jewels builds upon those foundations and, like its predecessors, comes equipped with a detailed liner booklet which not only recaps Brian's efforts so far, but provides extensively detailed accounts of the tunes he plays and their sources.  Indeed, anyone considering releasing their own album of Irish traditional music would be well advised to take a long look at Brian's notes before venturing into print.

As his previous recordings reveal, Brian's playing is precision incarnate, but not in the sense of a robotic performance for this is a man eager to let the tunes express themselves and is utterly equipped to do so.

For example, take the set of single jigs Hug the Bundle, Maloney's and Thomas Reilly Clerk of Fore where his chanter just swoops and soars like a hungry kestrel and the sparse use of drones simply reinforces the impact of his playing.  Alternatively, try the Humours of Glynn where the melody is delivered in a style almost akin to a scat singer and hiccups and tumbles along as though about to trip over its own feet, but without ever tumbling over.

Fortunately, too, Brian prefers complementation rather than accompaniment, so the only other musicians to appear on Fort of the Jewels are the harper Gráinne Hambly and his fellow piper Benedict Koehler.  All three are in evidence on a set of slip jigs, kicked off by Brian's solo rendition of Hardiman the Fiddler and mutually entering the twists and turns of The Arra Mountains before culminating in a fascinatingly resonant version of Redican's Mother.

Nowadays the uilleann pipes have many devotees and practitioners, spread far and wide around the world, but there remain few players of the instrument who are instantly recognizable.  Paddy Keenan, of course, is one and Liam O'Flynn another, but it cannot be mere coincidence that some of the most powerful, evocative and eloquent piping of the last few years has come from Neil Mulligan (of Leitrim stock) and Brian McNamara.

In part, Neil's playing harks back to the sean-nós tradition, but Brian's is inherently rooted in dance music and his piping not only sets the listener's toes a-tapping, but is positively suggestive about what might happen after the dance has finished!