Sporting Nell / The Crooked Road to Dublin;  The Harvest Home / Rossinver Braes;  Larry O'Gaff;  Mulhaire's No.9 / The Banks of the Ilen;  Old Man Dillon / The Rose in the Heather;  Lord Leitrim / The Earl of Thomond;  The Blackthorn Stick / Trim the Velvet;  The Fiddler Mick Hoy / Ben's Arrival;  Apples in Winter / The King of the Pipes;  Murphy's / The Smoky Chimney;  The Cavan Reel / The Galway Rambler;  Cherish the Ladies;  The Mullingar Races / The Boys on the Hilltop;  Hayes's Favourite / The Stack of Oats;  The Skylark / Roaring Mary 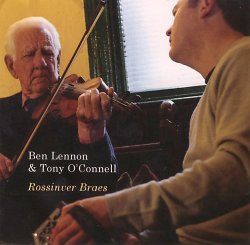 Towards the end of a long and fairly liquid evening sometime last year the editor of Musical Traditions disappeared into his office, returning with a handful of irish CDs. “Here, see what you think of these,” he said, pouring another large glass of Chateau Stradling.  And so, a few days later when I had recovered my senses, I did.

A couple of them were technically very good but I thought a little dull, a couple I should never have unwrapped ... and one stood out by a mile!  I played it constantly and many months later, in a similarly weakened state in Paris, he persuaded me to write a brief review.

Well, Ben Lennon’s association with Tony O’Connell has produced a CD of great tunes, wonderfully played, and even on occasion accompanied by brother Charlie on piano.  What more do you need to know?

Reason enough to buy it, I reckon, but if you’re still not convinced here’s a little of the splendid four-part Murphy’s Hornpipe (sound clip).  Make sure you have space ... involuntary dancing movements may be induced.

To my ears, fiddle and concertina are always a pleasing match tonally and here they complement each other perfectly, together but each distinct in its own way, this in contrast to one of the 'good but dull' category where fiddle and piano accordion were so together as to be largely indistinguishable.

It’s clear the two musicians are at ease and enjoying themselves.

This is not a concert performance, but rather the kind of music you would love to hear in a back bar (and what a pub that would be!) or round a kitchen table.  A good selection of rhythms varies nicely from track to track, something for everyone including two sets of barn dances and even a foxtrot, and all played at that lovely unhurried pace which loses none of the lift and drive but allows the notes some air.  Listen to the Cavan Reel (sound clip)

Charlie Lennon’s contribution extends to some of his own compositions, and Jerry McNamara on guitar and Alec Finn on bouzouki also join, maybe to lesser effect according to taste, but always well back.  Booklet notes are informative and give due credit, and you can actually read them.

What else can I say?  All in all, it’s a delight, and if you haven’t already bought it in the meantime, it’s not too late ... do it now!