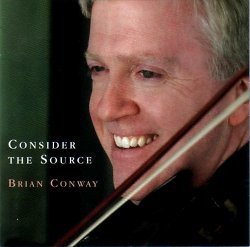 You can tell from the opening few notes that this CD is going to be good.  American fiddle player Brian Conway kicks off his second solo CD with two of the 'big' tunes recorded by Michael Coleman in the early 1930s, Trim the Velvet and Lord Gordon's.  Conway matches the master note for note and ends with the same cadence that was so satisfying when Coleman used it at the end of the second reel.  When you consider the source of Brian's music, the line to Coleman via Andy McGann and Martin Wynne is easy to spot in the bow work, the bounce and the clarity of his fingering.  But Brian is no simple copyist, here is a real craftsman who takes the music and puts his own stamp on it without breaking the links to the past.  Brian Conway is his own man and he gives a master class in the American tradition of Irish fiddle playing.

As with his previous solo CD, there are a few duets and group pieces which show what a sensitive ensemble player Brian is.  The company is very good, and well acquainted with each other's music.  Flute player Joanie Madden, box player Billy McComiskey and piano player Brendan Dolan often play with Brian as the Pride of New York Band.  The group playing is tight and lively with Brendan's father Felix taking piano duties on the three band tracks on this CD.  The choice of tunes is very tasteful too with tunes from Andy McGann, Paddy O'Brien and Ed Reavey.

Brian Conway is a superb technician and shows great creativity in his use of triplets, rolls and a punchy way of double stopping at the end of phrases that was a characteristic of Andy McGann's style.  There are few more modern tricks is his playing as well, at times his jig playing is quite lilting with swoops and slides reminiscent of Martin Hayes.

In addition to the usual selection of jigs, reels and hornpipes there are a couple of waltzes, a slow air, a Carolan tune and two songs.  The waltzes played with John Nolan on button accordion are reminiscent of old 78s and both are associated with Scottish box players.  They may not be to everybody's taste but there's no denying the quality of the playing and the ability to keep the toes tapping.

The Carolan piece Madam Maxwell is played in a very measured, classical style which seemed lifeless in comparison to the rest of the album and left me longing for the kind of treatment De Dannan used to give to Carolan tunes.  The 'baroque' overtones are also heavily reinforced by the counterpoint of Brendan Dolan's piano.  One of Brian's pupils Heather Martin Bixler provides second fiddle and piano on the slow air, The Wounded Hussar.  The harmony lines seem like an academic exercise and add little to bring out the heartache at the core of the slow air.  The Wounded Hussar is a tune I associate with Seamus Ennis and Tony McMahon, both men with the ability to generate incredible tension in their playing of the tune.  Brian clearly has the ability, soul and a resonant instrument to match those masters with a solo performance, unconstrained by this sort of paraphernalia.  Hopefully next time he records, he will let us hear that fiddle on its own.

Adding a couple of songs to the album is a big gamble.  Dan Milner leads a band arrangement of the old standard Matt Hyland which fails to impress.  The song has been covered so many times, it's hard to see why it's been included here and the arrangement is a bit stodgy.  In contrast the eight and a half minute long Highland Mary sung by Dubliner Naimh Parsons works precisely because of its simplicity.  It's an unusual song, written by Robbie Burns and set to a tune credited to Rory Dall O'Cathain, the track starts off with Brian playing the air over a simply chord background.  Naimh sing the song to the same backing before Brian reprises the air.  Simple, spellbindingly effective; but even so, not an essential part of the album.

Following the song with Naimh and leading up to the grand finale on the CD, Brian gives us a demonstration of his superb command of the fiddle.  He plays two technically demanding hornpipes, The Eclipse and The Sunshine, both fiddlers' tunes in the key of A but he makes both tunes seem light and easy.

The last track starts off with one of the all time great combinations of tunes, Bonnie Kate and Jenny's Chickens, but you just know Brian won't deliver another Coleman copy.  Brian shows us what you can do when you really know and love an old piece of music.  He twists it just enough to keep it fresh but never drifts from the truth in the tune.  He then cranks up the excitement by going into The Mason's Apron, Sean McGuire's great party piece, delivered with all the pizzazz of the original but with none of the showman's gloss that McGuire seemed to use.  Rounding the set off is the Mason's first cousin, Peter Street and you're left thrilled by the whole arrangement and wishing there was just one more tune.

Despite the reservations about the classical influences and some disappointment with the songs this is a great musician playing great music.  The production, mix and balance are good, and there's enough information in the sleeve notes to keep the listener well informed about the sources and significance of the tunes.  There's a slightly over-long essay on Brain's musical progress to this point and plenty of photos of Brian's lovely white teeth!  This CD will sit in the 'must have' category alongside his previous CD Through the Gate and his recent CD of live duets with Joe Burke.