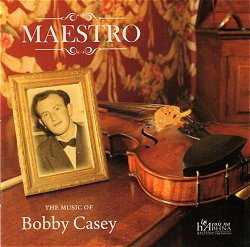 Superlatives are applied to all sorts of music and musicians these days but the title of this CD really is well merited.  Bobby Casey was born in Annagh near Miltown Malbay, Co Clare, but spent most of his adult life in London and died in 2000.  He made one LP for Mulligan records in 1977, now sadly long out of print, and featured on Paddy in the Smoke and the CCE LP Ceol an Clar.  In 1992, his friends in the Crehan family issued a cassette of Bobby playing on a trip home in 1959.  A number of private recordings, and BBC and RTE studio recordings were in circulation following Bobby's death.  In 2007 a CD of recordings made by Reg Hall and Bill Leader in London were released on a wonderful CD called Spirit of the West recorded between 1966 and 1971.

This CD presents a further selection of field recordings, again mostly made in London by CCE's Timire Ceol (official music collector) Seamus Mac Mathuna around 1969 and by Antoin Mac Gabhann (Tony Smith) on a visit to London in 1970.  The original recordings are now held in the Comhaltas archive at their Cois Na hAbhna centre in Ennis.

Casey's basic style was learned from his father and Martin 'Junior' Crehan who was nearly 20 years his senior but a life-long musical companion.  However, his own personality and skill took the music to a whole new level of inventiveness and character.  Casey had great command of the bow and imparted a strong rhythm into his playing, punctuating it with long and short bow strokes, bowed triplets and double stopping.  Equally effectively his finger work was crisp and faultless, as he dropped rolls, fingered triplets and little slides onto notes into the tunes.  He was an absolute master of variation, both the subtle changes in ornamentation as well as the melodic variations he invented for tunes such as Paddy Ryan's Dream and The College Groves.

He had his own settings of tunes such as Poll Ha'penny, which appears on just about every recording of Bobby, and there's an interesting twist on Miss Monaghan on this recording.  There are some tunes that seem to lend themselves to variation, whether through age or familiarity, and Miss Monaghan is one of those.  Seamus Ennis and Joe Cooley both had very distinctive settings and Casey's version adds the richness of options for the modern player.  Bobby Casey reinforced the lonesome sound of West Clare music by the way he played in a natural or just tempered scale, which is based on a scale with very flat thirds and sixths that to modern ears used to even tempered scales might even think sound out of tune.  The music sounds simultaneously wild and ancient but incredibly creative and fresh.

He kept his unique style despite being in the middle of the melting pot of regional players from Donegal to Kerry that gathered to play together in London pubs in the '50s and '60s.  Casey came home frequently and always supported the Willie Clancy Summer School from the '70s through to the '90s, teaching and playing for small classes as well as the mid-week fiddle recital.  The rest of the week he always seemed to find room for sessions with fellow Clare musicians such as Joe Ryan and John Kelly.  Both these players feature on a couple of tracks on this CD, which is a nice touch.

The different recording dates and circumstances mean there are slight changes in the quality of the recordings across the tracks, but not enough to distract the listener.  The overall recording quality is consistently very high.  Two early recordings included as tracks 14 and 15 probably date from the mid '50s and were provided to Mac Mathuna by the late Sean Reid and these do have a higher level of tape hum but the quality and inventiveness of the playing on these tracks makes their inclusion yet another treat.  As with other commercially released recordings of Casey there is no accompaniment on any of the tracks.

The 16 page booklet with the CD includes tributes from family and fellow musicians as well as detailed notes on the sources and influences of each selection.  It is a shame there are no details of the dates or location of each recording; some are obviously played for a small and appreciative audience, probably at a house party, others are just recorded at home.

Whether you're a devotee of West Clare fiddlers or just curious about a style of music playing that's becoming all too unusual, this is one CD that should be in every collection.  No matter how often you listen there will always be a little twist or variation to surprise and delight.  Obtainable from Custy's Music, Ennis and other good music outlets, this CD can't be recommended highly enough.