The Spirit of West Clare

Pol Ha'penny, Murphy's; Colonel Frazer, Toss The Feathers; Banish Misfortune, Kitty's Rambles; Jenny's Welcome To Charlie, The Last House In Connaught; Untitled; The Salamanca, The Green Groves Of Erin; The Gallowglass, The Legacy; The Liffey Banks, The Shaskeen, The Boys Of Ballisadare, Woman Of The House, Tansey's Favourite, The Graf Spee, The Ballinasloe Fair; The Dear Irish Boy; Kitty's Gone A-milking; Unidentified, Mrs Kenny; Farewell To Miltown, The Star Of Munster; Unidentified, The Mist On The Meadow, The Wandering Minstrel, The Drummer; The Ace And Deuce Of Pipering, Rodney's Glory; Bonny Kate; The Laurel Tree; The Gold Ring, The Legacy; Eileen Curren, The Star Of Munster, The Moving Bogs, Rolling In The Barrel, The Moving Bogs. 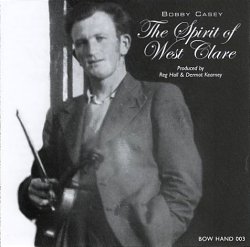 Here we have a very welcome CD by one of the greatest of all Irish fiddle players ever to be recorded, the late Bobby Casey, born, as Reg Hall tells us in his uncharacteristically brief sleeve notes, 'at the Crosses of Annagh in Co Clare in 1926'.

I was seldom in the right place at the right time.  For nigh on thirty years I have lived in rural Oxfordshire, and trips to the metropolis have been few and far between.  This resulted in very few sessions in Irish pubs on Sunday lunchtimes (although a handful stand out in memory), and remaining unexposed to a good deal of great music.  This is not to say that I never saw Casey in live performance.  I did.  On three occasions.  Twice as a guest of the Musical Traditions Club, in 1990 and 1991, and again at the National Folk Festival in Sutton Bonnington in 1994.  The last of these was a particularly pleasant experience, as I had the honour to direct a joint question and answer session, featuring musical interludes, with both Casey and the great Junior Crehan.  In fact, one photo on the CD sleeve shows the pair together, and they were frequent playing companions.

The recordings here are of a fiddle player rather more in his prime - he was aged between forty and forty five - which is certainly not to suggest that nearly thirty years on he was a slouch.  Far from it.  Via earlier recordings, and along with other stylists, his music had quite a significant impact on my understanding of the regional variations throughout Ireland, and more particularly on the west coast, so much so that I regretted not hearing him live more often.

For his was a very special music, filtered and percolated through whatever perceptions and motivations drove the man, and even within the slightly askance oddness of the generic west Clare style, he was always more 'out there' than the majority of his peers.  This is greatly in evidence here.  As Reg Hall points out, while absorbing fresh tunes as they came into vogue, his transformation of the material was extensive.  The archetypal Co Sligo style of Michael Coleman and Paddy Killoran recorded in the US and issued on 78 rpm discs during the 1920s and 30s, and circulating widely throughout Ireland, both on original issues brought home by returning or visiting emigrants and on reissues within the diaspora, are, as noted, 'transposed ...  into his own method of playing.'  Casey's bag of tricks features every form of nuance one might expect from a consumate Irish fiddle player: slurs, crans, cascading triplets, double stopping (used sparingly, though to great effect), and those unanticipated 'blue' notes.  We learn too that he played extensively in London with another of my heroes [see 'Ten records that changed my life'], the equally idiosyncratic Martin Byrnes, from Co Galway.  This I would love to have heard, although their stylistic divergences render the combination difficult to imagine.  As it happens, in common with many other stylists Casey was rather chameleon-like in his performance style.  The seminal album Paddy in the Smoke: Irish dance music from a London pub (Topic 12T176, now TSCD 603) illustrates this to perfection.  Both Casey and Byrnes are showcased there, although there are no tracks in tandem.  But when Casey plays alongside another fiddler (and that issue featured several such combinations) it is abundantly clear that he modifies his solo style, in particular ironing out the 'blue' notes and other idiosyncrasies.

The music on the release under review is simply wonderful to hear.  In the main he plays unaccompanied, which allows his musical creativity to shine through, although on one track the Clare concertina player Tommy McCarthy (who was with Casey at the Musical Traditions club gig in 1991) is heard, and other musicians feature on two further selections.  The programmers have taken the time and trouble to give us a varied set of rhythmic selections.  Of eighteen tracks (each in the main showcasing two or more tunes), nine are reel sets and five jigs, with the balance consisting of one each of hornpipes, slow air, waltzes and set dances.  One reel set is a veritable marathon, offering seven distinct tunes in rapid succession, and running just over eight minutes.  He possessed the ability to transform even the most familiar of dance tunes, say, Kitty's Rambles, into something quite special; although even his genius was unable to do much with the slow air My Dear Irish Boy.  In addition to the fiddle and ensemble tracks, one features Casey on tin whistle, and he proves to have been an adept player.

In fact, there is not one track which is below par, and I cannot recommend this release highly enough.  Given the apparent abandonment of the proposed Comhaltas issue of Casey's music, this has become the market leader.  Don't hesitate to give it your support.  Available from Bow Hand Records, 90 Prior Deram Walk, Canley, Coventry, CV4 8FS; while Veteran have it in their latest catalogue.