Well, what a pleasant surprise this turns out to be.  Not only does it at a stroke treble my collection of recordings from Panama (the others being on Original Music and the perversely named Musica Traditional label) but it offers up another intriguing area of diverse musics created by the meeting of Europe and Africa in the New World.

Panama, with a population of just two million, is the Southernmost country in Central America and yet was a province of Colombia until early this century and so was heavily influenced by its southern neighbour and thereby the whole of South America. 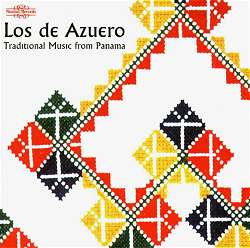 Further defining influences have come from its indigenous native Amerindians and from a sizeable population of English speaking Jamaicans - migrant workers who built the Panama Canal.  But here the overwhelming feel is of Spain with a dash of African rhythm thrown in for good measure.

Of the many regional styles that flourish in this small land among the most vibrant is that from the Azuero peninsular.  Migration from this isolated region has always been a fact of life and indeed all the performers of these 1997 recordings now reside in Panama City where they maintain their regional and cultural identity through music.

Four main traditions can be distinguished here although there is some overlap between them all, but the most striking to me are the fiddle led dance tunes - mostly cumbias and the Tamboritas (the national dance) that evoke stylistic comparisons with Mexican and Caribbean (notably St Lucia) traditions.  Miguel Angel Leguizamo is a splendid fiddler with a lovely sweet yet strong tone on some infectious rolling melodies often of distinct European flavour.

His interplay with the recorder player Jose Moreno is a delight and, supported by spot-on percussion, they create some very exciting dance music indeed.  (sound clip)

In stark contrast is the Grito.  Apparently a tradition performed on leaving the inn at night by men standing in a circle hollering at each other.  (I used to live near a pub in Southend where a similiar tradition took place).  The Original Music LP pitched a 10 year old boy against an 80 year old man and the examples here are very similiar.

With its falsetto whoops and gutteral musical barks it could be likened to a Mississippi field holler but really it is quite unique and is not found in any other Latin American country.  I cant say I am entirely surprised.  (sound clip)

The music of the mejorana, a small nylon strung guitar, is likewise a male preserve and a defining tradition within Panama.  It is the traditional accompaniment for decimas (derived from 16th century Spanish singing styles and widespread throughout the Hispanic Caribbean and Americas) and there are several fine examples here particularly by the strong voiced Juan Andres Castillo.  It is also employed to effect on local dance music - gentle, simple melodies but hypnotic rhythms with not a few Flamenco touches here and there.

And then all of this plus African rhythms comes together in the cantalante (female led) groups.  Soaring fiddle, mejorana, grito inflections, call and response choruses and driving percussion.

This is classic Latin American music drawing on and inspiring popular forms such as son, danzon, cumbia and salsa to this day.  And it is very fine indeed.  (sound clip)

Finally the CD closes with two cumbias (including the delightfully titled Julia Peels the Yucca) lead by an accordeonist Euclides Vergara.  Apparently the accordeon is now swamping the role previously held by the violin as the nation's folk instrument (sounds familiar?) but, before you get too dismayed, the result is joyous.  Indeed this whole CD, the first of Panamanian music to be issued in the UK, whilst it may have benefitted from a little more documentation, is quite excellent and shows that Panama, despite its small size has a rich and exciting musical heritage of which it can be justly proud.