A Maid and her Music

The memories, melodeons and related reed instruments of Ruth Askew
by Paul Marsh, with notes on her collection by Ruth Askew

As the owner of about a dozen melodeons, mostly oldish Hohners, it considerably reduced my feelings of guilt to read about someone who owns over ten times that number. 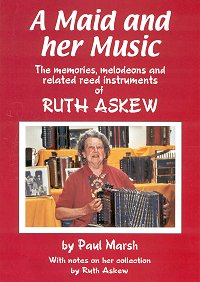 And as someone who hates to see instruments preserved in glass cases, it's great to hear that these are all apparently playable and indeed played.  I've never managed to see Ruth Askew's collection of melodeons and related free reed instruments (though it is from time to time on display at fairs and festivals) so the appearance of this book, partly built round the collection, was of some interest.

The contents fall into three main parts.  Around 40 of the book's 112 pages are devoted to selected items (some 55 in total) from the collection itself.  There is a brief account of how the collection came to be started, and four pages of colour photographs of the collection on display and of selected detail of a few instruments.  For each individual item, there is a black-and-white photograph, basic detail of appearance, key(s), construction, etc and remarks about its acquisition, in some cases including a photograph of the previous owner.  The basis of the selection of these items from the total collection is not given.  Some are fairly obviously there because they are unusual, such as a 1-row 6-stop melodeon with banks of reeds in G and C, a rare Lachenal button accordeon, and a couple of melodeons disguised as piano accordions.  One (4-stop Hohner, complete with fag packet to cushion the left-hand 'spoons') was owned by Oscar Woods, whilst another represents the Royal Standard brand endorsed by Peter Wyper.  Others are clearly novelty items, such as an accordeon jewellery box and the 'Arietta', a fiendish creation, the textual explanation of which doesn't quite seem to fit my reading of the photograph.  There are a couple of anglo concertinas, and a very large (16 inch) McCann duet concertina (reputedly the largest playable example in the world) and a miniature concertina of the type used by some music hall artistes.  Overall though, some 35 of the specimens are 1-row instruments.  Perhaps the decoration, stops and other external accoutrements such as bells (and in one case knee-rests) make this sort of instrument more photogenic than the externally-homogeneous Hohner-style 2 rows.  Only one item is a modern instrument, the nowadays-ubiquitous Castagnari 'Tommy', though in G/C.  Ruth notes that when purchased in 1989, it took just three weeks to be delivered, a stark contrast with the three years waited by someone I know, with still no sign of delivery.  Such is progress.

Another 57 or so pages is occupied by the story of Ruth's own musical life as told to Paul Marsh.  Again, this illustrated by numerous black-and-white photographs of Ruth, her family and various playing contexts and events.  Read alongside the pen-pictures of melodeon-owners mentioned above and some additional sketches (again with black-and-white photos) of players local to Ruth's home territories of Hampshire and the south-west, these stories provide interesting, if unsystematic data about the social history of music-making from the 1930s to the 1960s.

Unfortunately (and this is my only real criticism of the book), the author employs some of the commentary in this section to present a naďve and romantic distinction between music 'of the people' and 'folk music' as emerging in the folk revival of the 1960s and 1970s.  Surely we know that matters were not so tidy.  Traditional singers and musicians were sometimes musically literate and did learn songs from printed sources.  Repertories did not necessarily change slowly; many traditional musicians were quick to pick up contemporary material from radio and records.  Moreover, 'the people' sometimes rejected older material in preference for the popular music of the day.  Nevertheless, the personal and social details go some way towards meeting the contemporary demand that today's players should remember some of the musicians from whom their playing heritage derives.

A point that really struck me from Ruth's own story is the fragility of people's participation in music.  Despite playing since the age of five, Ruth gave up when she married, her playing career being revived only by a series of chance encounters with melodeons and musicians.

The third main section of the book is in fact somewhat scattered through the text, and perhaps amounts to 10 pages in all.  It deals with the history of the melodeon in general, and includes reproductions of melodeon and concertina advertising copy.  I would have personally liked to know more about all this, but perhaps the sources are inaccessible or non-existent.  The book reproduces a claim by the Scottish melodeon manufacturer and importer Campbell and Co that their instruments have 'pride of place in the bulk of Scottish homes'.  This is no doubt exaggerated, but I can add a stray fact; Campbell's melodeons were played and endorsed by no less a person than Kier Hardie, first leader of the Labour Party in Parliament; Vic Gammon has the picture.  (I also have a picture: of Idi Amin with a Vienna 1-row, but that's presumably not an endorsement that Hohner would want.)

This book is not an academic study and is by no means a systematic treatment of either melodeon development or relevant social history, but it will nevertheless be of great interest to box players and perhaps also as raw material for social historians.  It is nicely produced on good quality paper, and the large number of photographs is of good to excellent quality, inevitably varying with the age of the original.  There are a few errors mostly, though not all, corrected via a stick-on corrigendum.  It is well worth the asking price and I hope that it sells.