Yasko Argirov's CD is not an arty recording.  This is dance music, for the most part – horos and ratchenitsas.  It's quite brassy in places (though in fact I should probably say 'reedy' given the instrumentation – clarinet, sax and accordion on top of a thumping electric guitar beat, used almost as a tunable dumbek).  Definitely foot-tapping stuff. 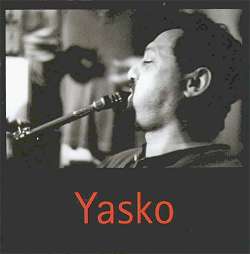 It's interesting that Nikola Parov of Zsaratnok appears on this recording.  I've always thought Zsaratnok were a bit arty with their arrangements, but not here.

The noisier dances are showy, but not as exciting as some I've heard.  A comparison with Theodosii Spassov is instructive; when Spassov is playing in traditional style (which isn't that often, but he does do it), his style is much more articulated, much sharper.  Yasko doesn't seem to play staccato, and some of the pieces are too undifferentiated, and have little contrast.  The opening Sopka Rtchenitsa suffers from this kind of fuzziness.  Yasko's virtuosity is not in question, but it doesn't always lead anywhere.  When it does, it seems to be the freer, riff-laden, tracks that are most successful, where Yasko leaves rhythm to the guitar and percussion and lets himself go completely.  There does, here, seem to be a rather jazzy feel to the music, but it's never un-Balkan, whereas Spassov often moves away from a Balkan to a purely jazz style.

On the other hand some of the slow introductions are extremely beautiful.  In these, Yasko's control of dynamic and phrasing is exquisite.  He bends notes, develops melody slowly out of fragments, and articulates the flowing melismas very precisely.  At the same time, the electric guitar with a rather oud-like riff and tinkling bells create a rather different sound world from most in Bavvno Makedonsko – a quite careful arrangement that fits the mood of the music, perhaps a teensy bit kitsch.

The music is an interesting mix; Turkish, Romanian, Roma, Bulgarian, Macedonian and Serbian.  However, there are no track descriptions – a pity, since the roots of the pieces are so diverse.  The CD liner asserts the "wealth of different traditions" that Yasko plays, but doesn't show which is which.  The Sirto for example I think is Serbian (I have a different version, attributed to 'Yugoslavia', in a tunebook); I have no idea whether the 'Rumanian tune' is Romanian or not (like French letters, Dutch courage, or castles in Spain?)  It would be interesting, too, to know where Yasko got the tunes from; is his repertory a single block, or did he 'inherit' the Roma and Bulgarian tunes, and learn the others travelling, or from itinerant musicians, or – time-honoured way of the oral tradition – from recordings?

As Nikola Parov points out in his far too skimpy notes to the recording, music in the Balkans has always had a racial or ethnic tinge to it.  Under Communist regimes, traditional music became a sign of assertive nationalism, often being 'purified' of other influences.  Perhaps the closest we have to it in the British Isles is the religious and political connotations attached to music in Northern Ireland – Protestant marching band music set against Catholic and republican 'Irish' music.  (The one influence of which it wasn't 'purified' was that of western classical music, with many folk ensembles working with massive, almost orchestral forces and using horrendously inauthentic arrangements.)

So, to some extent, playing music from all these traditions is now a political statement.  Of course, it's not new at all.  There was always a large Turkish population in Bulgaria – much reduced under Zhivkov's 'Bulgarianisation' policies, but still large enough to support its own political party – and there have always been Roma musicians, too.  What's new is the political meaning of playing "other people's music", which arises out of a new self-consciousness about race and nationality.

Folk musics of Eastern Europe have always been nationalist, from Smetana using folk tunes in his operas to Stalin's sponsorship of nomadic epic singers.  Now we're seeing the emergence of a non-nationalist, indeed anti-nationalist, folk music – or at least, of a number of bands which are interested in examining 'other' traditions.  And yet the fact that a particular tune is 'Serbian' or 'Bulgarian' or 'Rom' remains; the traditions don't seem to be fusing.

It's difficult to see whether these musicians will achieve a transference of their tolerant, non-jingoistic world view to the 'real' world.  Among the many casualties of Milosevic's latest war was the fragile ethnic peace that had been established in Macedonia; reports of racism are now common.  The Turkish community may have seen an improvement in their lives since the new Bulgarian regime took over; I suspect the Roma probably haven't.  I wonder whether these musicians are 'folk' musicians in the English sense, representing the values of their community, or whether – and this is particularly relevant to Yasko, a Roma musician – they're really outsiders, playing music for people who don't share their values or lifestyle?