Ardfert by the Sea (book and CD)

A Century of Music 1900 - 2000
a memoir of music, musicians, and dance from Ardfert, Co Kerry
by Ciarán Dalton 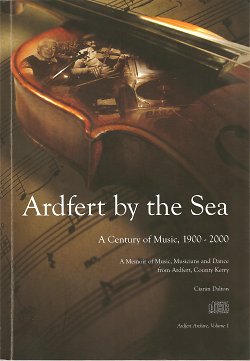 This is, in many ways, a delightful little publication.  Ardfert is a village some five miles north of Tralee which, despite the book's title, is not terribly close to the sea!  Ciarán Dalton has talked with many of the musicians in the area about themselves and their mentors of the previous generation, and their recollections are set out here.  Together, this gives a convincing picture of the musical life of the village in the century concerned, although I would say that many non-north-Kerry natives would greatly benefit from having some more information about exactly where the numerous people mentioned come from.  For example, the village of Lixnaw is often mentioned, and one imagines it to be hard by Ardfert - yet it is some twelve miles away, much further off than Tralee.

As well as recollections and memoirs, there are many, many photographs, of both people and places, plus 17 modern tune transcriptions, and 7 facsimilies of old players' manuscripts, including four from the 19th century tunebook of Jamesy O'Brien (a local fiddle teacher), which include bowing marks.  Sadly, not all the photographs are very well reproduced, and the text of The Sandhills of Kilmore on p.66 is a real mess.

Having been impressed by the stylish and very well executed book cover, it's rather a pity that the rest of the project - essentially a one-man labour of love by Cairán Dalton - has not been more carefully put together.  Certainly, some better proofreading would have been of benefit, and there is a great lack of consistency in presentation terms.  One obvious example; while the rest of the booklet is nicely presented in a brown sanserif font, two of the songs appear in a black typewriter font - for no reason that I can see.

Also, there's no Index.  Because of the essentially rambling nature of the various recollections included in the text, the lack of an index makes it extremely difficult to find the information relating to a player or singer featured on the CD.  This really is annoying!

The accompanying CD contains 26 tracks, of which one is a poem, two are talks, eight are 'ballads', one is a song (though quite why it isn't called a ballad is not explained) and the remainder are tunes or sets of tunes.  Of these, two are jigs, two are slides, three are polkas and the remainder are reels.  It seems contradictory that the subtitle, 'a memoir of music, musicians, and dance', gives the impression that just tunes will be found here, yet the CD contains 9 songs - almost one third of the total number of tracks, and approaching half of the CD's total running time!  Yet the book has only 4 pages of text (out of 71) relating to the singers.

The CD starts with John M Sullivan singing Ardfert by the Sea very well, and his two other contributions, The Sandhills of Kilmore and The Lovely Cashenside,are equally enjoyable.  Track 2 features the jigs The Bees in the Heather/Patey Sullivan's, played on the fiddle and heavy boot by Patey Sullivan.  Mercifully, his foot-tapping gets less pronounced as the track proceeds - and his playing improves.  He's a good player, as evidenced by his slides on Track 13, but I feel that his contribution might have sat better a little further into the programme.  Similarly, Willie Sullivan's polka Boys of the Town on track 4, features the melodeon played with just one, wrong, bass chord throughout the piece.  I'd almost forgotten this quirk, which was quite common with Irish box players in the '40s and '50s - before someone figured out that it was a good idea to leave the basses out altogether.

Paddy 'Bán' Sullivan may be the best fiddler here, and has three tracks (5 tunes) to his credit - all very enjoyable.  Michael Sullivan is also pretty good, but a bit flashy for my taste.  His contribution appears to have been recorded from the radio, as are two or three other tracks - and these tend to be far better recordings.

One should certainly not complain about the quality of the recordings, which were not specially made for this CD nor, indeed, were most of them intended for public consumption at the time they were made.  But the fact that many of the tracks end abruptly (and a few start that way) is a great pity, when a few minutes spent fading out 'bad' endings and starts, and getting the track levels consistent would have made for a much happier listening experience.

All in all, a very worthwhile and interesting project, somewhat marred by a lack of attention to detail in its presentation.  This does not, of course, detract one whit from the inherent value of the information contained, nor that of the sound recordings on the accompanying CD.  Ciarán can be contacted at: Caherard Publications, Ardfert, Co Kerry or at mobile 00353 -(0)867304174.  Book price €20 plus P&P