An Turas
Gaelic song from Scotland and Ireland

Why canÆt it be like it is with cows or sheep -
If youÆre unhappy with the purchase to return it to the fair?
From Track 2.  FuĒgfidh Mise an Baile Seo

Amen to the Trades Descriptions Act, and customer-friendly labelling, even though IÆm stuck for a suitable adjective to epitomise this product.  I thought of using words like vacuous and pallid, but it is neither of those things. 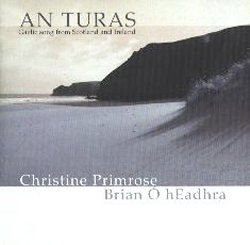 It didnÆt particularly bore me; it is well produced; the pastel shaded booklet looks very attractive; and it didnÆt, as far too many 'traditional' records do nowadays, sound like something designed for the forced extraction of insurgent intelligence.  ItÆs just that, once this review is written, and the CD is placed on my shelf, I cannot imagine that I will ever remember to play it.

There is one epithet which does come to mind though, and it is a fairly friendly one - groundbreaking.  Off the top of my head, I cannot recall another collaboration between two singers, which embraces the Gaelic traditions of Ireland and Scotland.  Well, for Scotland, read Hebrides, and for Hebrides, read Isle of Lewis.

Of the two singers, I liked Christine Primrose the best.  She has a big striking voice and a commanding technique which immediately grabs the listener.  Unfortunately, I found that neither asset sustained my interest for any length of time.  She obviously has a great respect for her local heritage.  She has obviously learnt a lot from it, and she has clearly sought to it do justice.  However, in that respect, she reminds me of many other singers who have come up since the days when the folk tradition was a thriving entity.  That is to say, I hear a lot of virtuosity, but I hear very little passion.

Unlike Ms Primrose, Brian ė hEadra is not an heir to any immediately accessible tradition, and this might explain why his style fluctuates somewhat between tracks.  The booklet tells us that he has spent some time in Conamara, learning Gaelic and listening to the styles of the local sean n¾s singers.  However, with one exception - An GoirtĒn Eornan - one would never guess that he might count singers with names like Mac Donnchadha or ė Cheannabhßin among his heroes.  Elsewhere, and especially on the two guitar accompanied tracks, he reminds me of several singers from the more popular end of the 'folk' market.  In particular, I could hear quite a lot of Seßn Keane of Caherlistrane and, on occasion, Dick Gaughan.  Neither constitute much of a recommendation in my view.

The two singers more or less take turn and turn about and present an interesting and varied programme.  Authors, where they are known, are credited and the Gaelic transcriptions are supplemented with some wonderfully pungent translations.  I was particularly taken with the following from NĒl Sķ Ina Lß.

AmnÆt I the bloody fool
That poured the rent money down my throat
That filled my heart with woe
And left others, too, in misery

AmnÆt I indeed!  Otherwise, the booklet contains absolutely no information on the songs.  Given the fact that this release is aimed at two distinct audiences, I find that surprising.  Also, the translation for Christine PrimroseÆs Seathan, renders Liutha or Latium into English as Munster.  That was news to me, and there are several other place names in that song which would have benefitted from similar clarification.

In the finish, the epithet which seems to fit best is anodyne.  Pleasant, soothing, and memorable only until one is lulled to sleep.