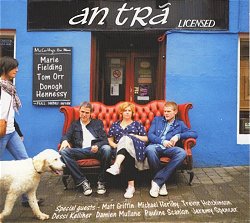 This is not the first time I've wondered what I'm doing writing a review of a CD which contains little traditional music, and in which the playing is not what I would call 'in a traditional style'.  The answer is, of course, that it's an absolutely brilliant record!  Here's a bit of the reels on track 1, Beck's Verandah / Moy Cottage.

The band, led by Scots fiddler Marie Fielding, is a Scots/Irish mixture; the main trio aided here and there by six other musicians.  The playing is always blinding, the recording quality is superb, and all the tunes, whether traditional or composed, are crackers.

When something like this drops through the letterbox I look to see how much of the music is traditional, and if some of it is, I put it on to see if the playing is what I would call 'in a traditional style'.  Nine times out of ten, it goes straight in the bin after a minute or two.  This one played right through, and then went into the car to be played again on a trip to Bristol yesterday evening.

I was reminded of my reaction upon first hearing the Brendan Voyage CD many years ago - it sounded like orchestral music, but with the pipes as the soloist.  This one sounds like modern music, but with fiddle, box and guitar taking the lead.  But, as with the Brendan Voyage CD, it's the arangements as much as the playing which demands your attention.  It seems that, after playing a tune a couple of time, they think "Let's do something different", and pull a lightning-fast key/rhythm/beat change ... though not necessarily into a new tune.  Sometimes they just use a radically different set of back-up chords which make you think they've changed key - when they haven't.

I don't pretend to know enough about 'Celtic' music to adequately describe or criticise individual tracks, but I'd like to leave you with a couple more examples of the band's music.  First, a part of the suite An Trį on track 6, followed by some of track 10, Betsy Boo / Break the Light / St Andrew's Reel.

There is just one thing that didn't please me about this record, and that's track 9, where the seventh 'special guest', Pauline Scanlon, sings the ubiquitous Raglan Road.  This really stands out, in the company of so much exciting music, as dull, insipid, and completely out of place here.