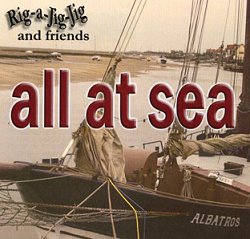 Readers of these pages will be fimiliar with the name of Chris Holderness as the author of a score of excellent and interesting articles about musicians, singers and the traditions of Norfolk.  You may also have noticed that his name at the end of each article has the words 'Rig-a-Jig-Jig: A Norfolk History Project' after it.

Rig-a-Jig-Jig was started in 1999 by Des Miller to collect and document information about the traditional musical history of Norfolk.  Since then Chris Holderness has joined the project and further research work has led to the production of a short book, Shipdham: Traditional Music Making in a Norfolk Village; a CD, Father Went to Yarmouth; and to exhibitions of the collection in village halls all over Norfolk.  Des and Chris collect peoples' memories of local music making in the form of taped interviews which are transcribed, photographs, recordings and film, and currently have a large and growing archive.  This, then, is their second CD project.

Not only is Chris a prodigeous researcher and writer, but also a rather good fiddle player and, it would seem, the leader of the band that shares the history project's name and plays the music on this CD.  They've also added a few friends to the mix: Richard Davies (of 'The Dancing Davies' - see Chris's latest article), long-time coxwain of the Cromer lifeboat, singer and stepdancer; singer Dave Cooper; and stepdancing sisters Cis Brinklow and Pam Buckley - that's why there are two entries 'Yarmouth Hornpipe + stepping' in the above track list; one from each sister.

The band has a fairly standard line-up for an outfit of this sort and, when playing all at once (which is by no means all through this CD) they include two fiddles, two mouthorgans, a banjo, a ukulele, a melodeon and, this being East Anglia, a hammered dulcimer.  As might be expected, given the above outline of the Rig-a-Jig-Jig project, there are a good number of little-known local tunes alongside one which have become nationally known from CDs and sessions over the last 30 or so years.  Here's some of track 1, the Norfolk Long Dance tunes collected in Wayford Bridge and Hindringham.

Several of the tracks are duets by Chris Holderness (fiddle) and Richard Blake (dulcimer), as heard here with The Rakes of Mallow.  Among the vocal tracks, I should mention the only truly traditional singer, Richard Davies, long-time coxwain of the Cromer lifeboat, who contributes The Foggy Dew.

The CD ends with a pair of Walter Bulwer polkas - not the familiar Numbers 1 & 2, but the rarely heard Numbers 3 & 4.  I won't provide a sound clip of these ... buy the CD from the Rig-a-Jig-Jig website if you want to hear them.