The Pirates of Puirt 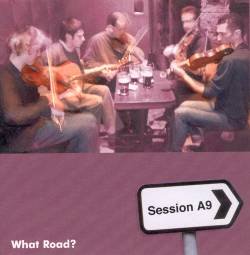 Many of the tracks on this album bring to mind the San Franciscan driving scenes in cool '60s thriller Bullitt.  They are sleek, smooth, and turn a lovely corner but never really put enough pedal to the metal for me.  Fred Morrison's Aird Ranters finds itself in polite conversation, and Gordon Duncan's Pressed for Time unwinds with a herbal tea.  However, Chris Drever's dark American ballad Shady Grove hits the spot, as does track 11's Kaleb Watt of the Broch and Greek Street.  Track 8 also jigs away in fine form.

Pith-less interludes obscure a few otherwise good tracks, giving the impression that the fiddle squad is sorting out the next pint whilst the remaining few transport us to inside the lift of an up-market department store.  I don't know, these guys are all great players and there is something likeable about Session A9, but the road is bit too straight and the drivers sometimes carve ribbons with their hands in the wind rather than gripping the wheel. 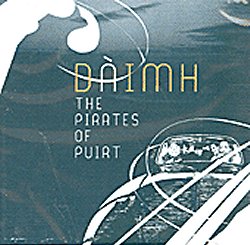 Dàimh has only been swashbuckling for a few years now, but this follow up to their 2000 debut firmly establishes them as Scotland's finest young traditional tune band.  With their myriad of origins - Morar, Cape Breton, Arisaig, California and Dublin - one would perhaps expect a Celtic soup of the runniest proportions.  However, Dàimh is more like a single malt, and what a punch.  The sheer tightness of the playing, particularly between MacKenzie and McVarish, is stunning and hits you in the solar plexus harder than a broadsword.  Understated guitar and bodhran from Martin and Bremner hold everything together and provide a kick in just the right places.  O Rua's plucky banjo and fine tune writing (especially mazurka Down and Out in Santiago de Compestella) seals the package.

Great tracks include #1, which hovers in Allan MacDonald's strange reel (?) Tar the House until exploding into Castlebay and The Antrim Rose, and set #6 The C Tune.  Apparently, Martin found the first tune of the set The Wren's Death in MacKenzie's drawers, and they transposed the last tune The First Month of Spring to C major to fit on the Scottish small pipes in A…?  OK…  Anyway, the liner notes make amusing reading whilst listening to this superb album.