CD 1: I Were Borned in an Old Gypsy Wagon.  Phoebe Smith: I'm a Romany Rai;  Tom Willett: The Roaming Journeyman;  Janet Penfold: Won't You Buy My Sweet Blooming Lavender?;  Rebecca Penfold: The Banks of Sweet Primroses;  Charlie Scamp: How Old Are You, My Pretty Fair Maid?;  Mary Fuller: Oh, What a Life;  Wally Fuller: The Game of Cards;  Charlie Scamp: Come, Father, Build Me a Boat;  Sheila Smith: Dear Father, Pray Build Me a Boat;  Phoebe Smith: Higher Germany;  Tom Willett: The Rose of Ardene;  Rebecca Penfold: Meeting is a Pleasant Place;  Jack Fuller: Briny O'Then;  Wally Fuller: The Bold Drunkards;  Chris Willett: The Little Ball of Yam;  Jack Fuller: Green Grow the Laurels;  Rebecca Penfold: The Banks of the Sweet Dundee;  Charlie Scamp: Young Leonard;  Phoebe Smith: Down by the Sheepfold;  Chris Willett: Thorny Park;  Wally Fuller: The Bold Poachers;  Tom & Chris Willett: Down by the Tanyard Side;  Wally Fuller: I Am a Man That's Done Wrong to My Parents;  Charlie Scamp: Barbary Allen;  Charlie Scamp: A Blacksmith Courted Me;  Phoebe Smith: A Blacksmith Courted Me.
CD 2: Carolyne Hughes and her Family.  Carolyne Hughes: The Soldier and the Lady, The Sprig of Thyme, A Blacksmith Courted Me, The London Murder, Once I Had a Colour, My Father He Built Me a Shady Bower, Georgie, Young Willie, My Black Dog and Sheep Crook, If I Were a Blackbird, Down by the Old Riverside, A Wager, a Wager, The Brake of Briars, The Bird in the Bush, Flash Girls and Airy, The Game of Cards, Catch Me, Bold Rogue if You Can, The Cuckoo, Died for Love, Lord Thomas and Fair Ellender, The Little Boy, Adieu to Old England, The Butcher Boy, My Truelove Was a Sailor Lad, Meet Me Tonight in the Moonlight, Tuning, The Draggle-Tail Gypsies.  Carolyne Hughes & daughter: As I Was A-walking One May Summer's Morning, Billy Boy;  Celia Hughes: Jealousy Thoughts;  John Hughes: The Long Lost Child, Barbry Allen;  Carrie Warren: Henry My Son. 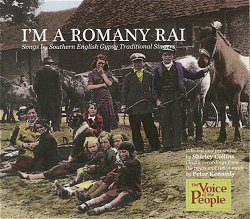 What a treat!  What a pleasure!  Peter Kennedy's recordings of English gypsies, produced as part of Topic's second wave of Voice of the People records.  The booklet gives Reg Hall's detailed history of traditional music in Britain, particularly in the twentieth century.  When we get to the songs, they are 'Selected and presented by Shirley Collins'.  The introduction to Shirley says that 'A most appropriate qualification for her working on the material contained in ...  I'm a Romany Rai is that she knew Peter Kennedy at the time (he) was making these recordings ...' and it's so good to get (some) detailed biographies of the singers.  There is almost a prerequisite today, to present the singer as well as the song, and the pleasure of the enthusiast is so much better for it.

The record opens with the great Phoebe Smith in fine form singing I'm a Romany Rai. The notes say that Phoebe was 'in her day one of the two finest female Gypsy singers in England (the other was Carolyne Hughes)'.  Well, maybe.

This is followed by Tom Willett singing The Roaming Journeyman.  There are several songs sung by Tom and Chris Willett who many will know from, I believe, their only previously published recording, the LP 'The Roving Journeymen' which was such a remarkable revelation to so many in the mid 'Sixties.  The LP was recorded by Bill Leader and Paul Carter at more or less the same time as these Kennedy recordings.

After this the record continues with Janet and Rebecca Penfold, who do not appear to be related, Mary, Wally and Jack Fuller - sadly 'Peter Kennedy left no notes about the Fuller Family'(p.17) but I believe that Jack was the husband of Louise Fuller whose singing impressed us so much from the '60s.  She was not herself a Gypsy but was married into the family.  Every one of the singers is impressive - perhaps one of the standouts is Sheila Smith, aged 7, singing a comprehensive Father, Build me a Boat clearly and with nary a falter.  It naturally brings to mind the wonderful Angela Brazil who Kennedy recorded as a child in Blairgowrie in 1955.  One small cavil here; was it necessary to interpret 'trowsis' (p.20) when she sings so clearly and so many others are not as clear as her?

Charlie Scamp is a great presence on this record.  His powerful singing may not be to every taste; it is a bit forceful and can bring to mind the fact that he also sang in workingmen's clubs, for a non folkie, possibly non-Gypsy audience.  I think he may be the only person on this record who ever sang 'semi-professionally'.  In the notes it says that he was Phoebe Smith's cousin (p.30), but I remember at her grandaughter's wedding being introduced to him by Phoebe as 'my brother Charlie'.

What you make of this record is a matter of individual choice; for me, Phoebe Smith live was the greatest ever, and some of these recordings capture her more nearly than other collectors have sometimes done; Wally Fuller sings a perfect Game of Cards; Jack Fuller chorusing "little do" on Briny O'Then is charming; Rebecca Penfold, not recorded until 1971 and '73, could easily be a non-gypsy country singer; Chris Willett is a perfect example of the best of younger Gypsy singers in the '50s, while his father sings with the authority of the 'master'.  The record finishes with Charlie Scamp singing Barbara Allen exquisitely, followed by his very truncated A Blacksmith Courted Me, and his sister singing the same song superbly.  Sorry, am I gushing?  In truth, I cannot think of a track that I didn't enjoy - and I'm sure that's the only time I've ever been able to say that!

Well, that's the first of this two-CD set.  The second is a whole CD of Carolyne (sic) Hughes.  Although there has hardly ever before been a published recording of Caroline Hughes, her singing has been well known to enthusiasts for many years.  In 1962 and '66 Ewan MacColl and Peggy Seeger recorded many songs from her, but these were almost never published.  However, the folk scene being what it is, hundreds of copies, and further copies of her singing were passed around.  The quality of the copies were necessarily terrible, crackly and distorted, but the singing was stunning.  There is no doubting the quality of her performance, her voice, her intense love of the songs, and the stories they tell.  Having never seen her perform, I can still say with certainty that 'Queen' Caroline Hughes was, with Phoebe Smith, 'one of the two finest female Gypsy singers in England' (p.11).  However, on this recording there is only an occasional hint of any dazzling performance.  The notes do say 'It must have been both an exhilarating and exhausting experience for Peter Kennedy when he recorded Carolyne Hughes ...  on 19 April 1968.  The songs came cascading from her.' (p.40).  And so it sounds, as though she wants to get them all out as quickly as possible - garbled and with little thought to performance or sense.  Often Gypsies miss verses out of songs, but these are for singing among people who know the story anyway, and so they make sense to the listener.  Here, however, her main purpose seems to be just getting it out all at once.  That doesn't mean that there is no value in these recordings, particularly heard one song at a time, but they are a poor shadow of the MacColl and Seeger recordings.

Peter Kennedy was indeed folk royalty - some would say "and didn't he know it?"  His father was the second director of the then EFDS, after Cecil Sharp.  His aunt, Maud Karpeles, accompanied Sharp on his collecting tours of the Appalachians, and Kennedy on some of his collecting, including from Charlie Scamp on this CD.

Kennedy himself had a very impressive CV.  From the fifties he worked for the Society and the BBC, recording the music from all over the British Isles, including Northern Ireland from whence came the title of his BBC radio series As I Roved Out - the song recorded from Sarah Makem of Co Armagh.  He worked with Alan Lomax and Shirley Collins, and went on to edit Folk Songs of Britain, a ten volume series of sound recordings, originally published in the USA on Caedmon Records.  He certainly had all the right credentials, and Topic have very generously purchased the rights to his collection so that, in time, we can all benefit from their benevolent wisdom.

There are of course other sides to the Kennedy story; no time for them here, but just a wee fragment to finish with.  When he recorded what he seemed to consider 'simple country folk' he would often pay them and leave them with the impression that he now owned their songs.  Not all of these singers were quite so 'simple' - Phoebe Smith framed her cheque for 7/6d (the cost of a marriage licence!) from Peter Kennedy, and hung it on her sitting room wall.  She knew what she was worth!