You Never Heard So Sweet 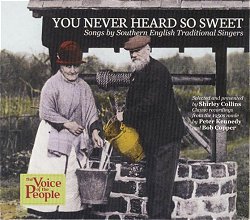 This new Voice of the People set comprises a selection of songs recorded in the 1950s by either Peter Kennedy (11 songs) or Bob Copper (15 songs) and it must be said that there are some stunning performances here.  Some singers, George 'Pop' Maynard, Bob & Ron Copper, George Attrill, Enos White, George Spicer and Harry Upton for example, should be reasonably well-known to most MT readers.  But some of the other singers may be less well-known.  Luckily, Bob Copper wrote about many of these singers in his splendid 1973 book Songs and Southern Breezes and Shirley Collins has been able to use Bob's book to tell us about the singers.

As I said, there are some splendid tracks on this CD.  I really like Luther Hills and Mark Fuller's performance of Dame Durden and Bob and Ron Copper's singing of the rare carol Shepherds Arise.  George Maynard gives us a lovely version of another seldom-heard song, Down by the Seaside, while George Attrill's The Broken Down Gentleman is another gem.  Three of the sings, Ned Adams, Joe Spicer and Noah Gillette were fishermen from Hastings and I was struck by how similar Ned Adams sometimes sounded to that other great fisherman-singer, Sam Larner.  Recordings of both George Spicer's Folkestone Murder and Harry Upton's Canadee-i-o are available elsewhere (MTCD309-0 and MTCD311-2).  I knew both of these singers, who were known to one another, and I was fascinated to see how they reacted in each other's company.  They were certainly rivals when it came to singing.  George (a head herdsman) looked down on Harry (a 'mere' cowman), while Harry always considered George, who came originally from near Dover, to be an 'outsider'.  But, I think that what really motivated these beliefs was the fact that each person thought himself to be the better singer.

As these recordings were made over fifty years ago it is inevitable that some of the songs are now well-known, Lily Cook's Caroline and Her Young Sailor, Jim Barrett's Spencer the Rover, Fred Hewett's While Jones's Ale was New, Jim Swain's Jim the Carter Lad and Luther Hills and Mark Fuller's The Foggy Dew spring to mind.  I am a little surprised to see these songs here when songs such as George Fosbury's Banks of the Mossom, Frank Bond's Chiner's Song or Turp Brown's Streams of Lovely Nancy could have been included.  One fascinating song that is included is a version of the carol The Moon Shines Bright, sung by Albert Beale from Kenardington in Kent.  In 1908 Albert's father, James Beale sang the same song to Cecil Sharp and it is lovely to compare the two versions.  I also like this comment, made to Bob Copper by the singer Enos White.  'Enos quite casually told Bob how Ralph Vaughan Williams had collected some songs from his mother-in-law Mrs Randall, who lived at Ellisfield in Hampshire some fifty years earlier.  "Ol' Vaughan Williams got some songs offen my wife's mother, you know."'  The Vaughan Williams connection also showed up when another singer Hampshire singer, Frank Cole, turned out to be the son-in-law of a Mrs Randall of Ellisfield, who sang to Vaughan Williams in 1909.

I recently wrote a piece for Musical Traditions about the use of out-dated language in the song Old Johnny Bigger.  Mrs Hewett gets round this by calling her song Old Johnny Buckle and it really is a splendid version of the song.  Take this verse, for example:

Now old Mrs Buckle went out fishing one day.
She caught her left leg in the clay.
The toads and frogs all wobbled about.
She ran to get a shovel to dig herself out.

And I especially like Gladys Stone's version of the song Deep in Love , sung to the tune that is usually associated with the song A Sailor's Life is a Weary Life, which is made up of a string of so-called 'floating' verses, such as:

Where love is planted, there it grows.
It buds and blossoms most like a rose.
It has a sweet and pleasant smell.
No flower on earth can it excel.

These are just the sort of verses that Cecil Sharp's Appalachian singers would have loved to sing.

Shirley Collins deserves praise for her work in bringing this CD together.  It is a pity, however, that she tells us next to nothing about the songs.  There is a brief note to say that The Bonny Bunch of Roses O 'was composed by George Brown, a broadside hack writer, in the mid-1830s' (surely the term 'hack' is a bit strong for someone who could produce the words to such a fine song!), but that is about all that we are told about the songs.  It would, I think, have been of interest to note that George Maynard was the only English singer to be recorded singing Down by the Seaside, a song which has only otherwise been noted from a handful of singers from Canada's eastern seaboard.  Or that Enos White's The Bold Dragoon began life as a mid-17th century song, The Master Piece of Love Songs, a copy of which was reprinted by John Ashton in his book A Century of Ballads (1887).  And, of course, all kinds of fanciful meanings that had become attached to the song The Foggy Dew had been swept away by Bob Thomson in his article The Frightful Foggy Dew (Folk Music Journal IV:1.  1980 pp.35-61).

You Never Heard so Sweet is a fascinating and quite wonderful CD of the sort of songs that Cecil Sharp, Ralph Vaughan Williams and the other Edwardian collectors set out to rescue for posterity.  And there is nothing wrong with this.  But, as I played the CD, I did start to wonder quite why it has been included in the Voice of the People series.  In the booklet introduction, Reg Hall says that he has tried to get away from the attitudes and ideas of the early collectors, who were, 'middle-class, educated and operating within the mentality of their time' and who were 'motivated by varying shades of nationalism'.  He adds, 'Part of the motivation behind the preparation of this series has been to shift the emphasis away from the values of the folk-song collectors and to present traditional music in its own right, reflecting its history, social contexts and the values of its practitioners.'

This is just not the case with the CD.  Both collectors were collecting very much in the manner of Cecil Sharp.  Peter Kennedy was the nephew of Sharp's assistant Maud Karpeles who, throughout her long life, insisted that only songs that fitted Cecil Sharp's tight definition of what a folksong was, should be collected.  Indeed Miss Karpeles was with Peter Kennedy when he recorded Albert Beale singing The Moon Shines Bright, just as she had been with Cecil Sharp when Sharp collected it from Albert's father.  And, in many ways, Bob Copper also fitted into the Edwardian mould.  His family had been visited by folksong collectors from the late 1800s onwards.  No doubt they had all praised the family for retaining so many folksongs, so much so that when Bob agreed to help the BBC out, by working as a part-time collector on their behalf, he had a good idea of the type of songs that he should collect.

I am glad to see that the Peter Kennedy collection is now housed in the British Library, which means that the recordings should be available for all to hear.  During his life he was something of a controversial figure.  I had always assumed that when he was employed by the EFDSS the recordings made during that period would have been the property of the Society.  Likewise, when he was working for the BBC, then surely the BBC would have ownership rights.  When Peter Kennedy left the EFDSS he took all his tapes with him - they were removed over a weekend, when Cecil Sharp House was closed to the public - and Peter then began selling cassette copies of the tapes.  If, as many people suspected, they were not his tapes, but tapes that really belonged to either the EFDSS or the BBC, then what right had he to sell such copies?  I have been told that Reg Hall has visited the BBC archives to try to get to the bottom of this sorry tale and I really had hoped that he would have said something about this situation in his notes.  But, sadly, he does not and so we are still left in the dark over this unfortunate matter.  And I am sorry about this, because, as this CD shows, Peter Kennedy made some wonderful recordings of traditional English folksingers and, for this, we are all in his debt.  And let us not forget Bob Copper, and the work that he did in recording some splendid singers and their songs.

According to Reg Hall, 'The recordings in this series represent cultures that have passed or are passing rapidly, as the social and economic conditions and the habitats that supported them have gone or are going forever.'  He is, I think, right in making this statement.  But at least Reg has done something about this situation, and the Voice of the People series is a fitting tribute to the men and women who have helped keep this tradition alive.  Reg is perhaps the only person who, with such a breadth of knowledge, could have taken on the task of producing this series so successfully.  He deserves thanks from all of us.