In the mid-1990s London's Irish music scene seemed to be in its death throes.  Old established venues had closed their doors to Irish musicians in favour of more lucrative ventures such as karaoke, while others had simply closed their doors for good.  The reasons were twofold: on the one hand, the commercial pressure faced by landlords; and, on the other, the emergence of Ireland as the economically booming "Celtic Tiger" had meant that many who might have been lured to London in the past found plenty of opportunities at home, while others returned back to Ireland.

But something seems to have been stirring recently.  There are more sessions now than for many a year and while second-generation Irish people have come of age, a new younger generation is also emerging.  There's a confidence too in the music and the organisational skills to match, while the increased prominence of Irish traditional music worldwide (thanks in part to the Riverdance phenomenon) must have had some knock-on effect.  Additionally, the relative cheapness of recording a CD means that more London-Irish musicians have been able to increase their own visibility and we've seen marvellous albums over the last couple of years from members of the older generation, such as Brian Rooney and Danny Meehan, plus younger musicians, such as Brian Kelly and The London Lasses and Pete Quinn, alongside Reg Hall's much-valued efforts to ensure that the golden age of London-Irish music is available for posterity.

The three albums reviewed here were all launched during the October 2002 Return to Camden Town festival, whose programming brought together many of London's Irish musicians alongside stars from the home country.  Sell-out crowds for almost every event demonstrated the music's increasing popularity and it was especially heartening to see so many younger musicians in attendance. 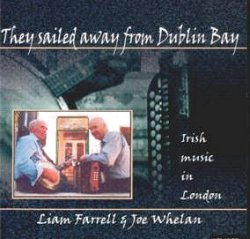 Liam Farrell and Joe Whelan have been playing together for fifteen or so years now.  Banjo player Liam hails from Omagh, Co Tyrone, and is perhaps best-known for his membership of Le Cheile in the 1970s (which included Raymond Roland on accordion, fiddler Danny Meehan and flute player P J Crotty) - the band recorded a couple of sadly long-lost albums, never reissued on CD.  Accordionist Joe Whelan is from Eglish in County Offaly and arrived in England in the early 1960s, subsequently playing in a variety of céilí bands.  One of the liner's photographs shows the line-up of The Four Courts Céilí Band when they appeared at the Gresham Ballroom on the Holloway Road in March 1963 (sadly, the Gresham closed its doors several years ago and the building now houses a Sainsbury's store).  There's a young Reg Hall in the photograph too, sitting just behind Lucy Farr and Tommy Maguire, and it's Reg who provides the piano accompaniment to They Sailed away from Dublin Bay.  The fourth and final musician is flute player James Carty, son of another influential London-based Irish musician, John Carty, whose same-named son is, of course, a well-known fiddler and flute-player in his own right.

Reg also supplies his customary high quality and, in this case, particularly evocative liner notes which are graced by photos from his own and Liam Farrell's collections, though unfortunately there is insufficient space for detailed information on the tunes.  That's not ultimately too important as many of the thirty-six played here will be very familiar to listeners, though for 'familiar' definitely don't read 'hackneyed'.  There's certainly an old-timey feel to the album, as might be expected from the age of three of the participants, but there's nothing at all wrong with that since the music here is equally just timeless.  Take for example, the pair of reels The Maid of Mount Cisco and The Abbey where the music simply rolls along in its own happy way, banjo, accordion and flute in sheer synchronicity while the piano vamps are absolutely appropriate.  There's also a very London feel to the album which must essentially lie in the combination of instruments here and more especially the interplay between the banjo and the other leading pair.

They Sailed away from Dublin Bay is a long album - almost an hour in duration - but a fundamentally pleasant way to pass the time.  There's nothing exceptionally striking, but just four musicians enjoying their music and I have no doubts that you will do so to. 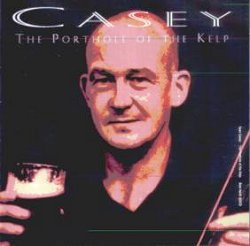 One of the younger musicians referred to by Reg in his aforementioned liner notes is the fiddler Seán Casey who was born some thirty-five or so years ago in North London.  His father was, of course, Bobby Casey whose own father was Scully Casey which is some lineage to live up to.  Moreover, when Seán was growing up in Kentish Town the household's lodger was a certain Willie Clancy while the first instruction he ever received came from Tommy McCarthy (the old cliché "from Clare to here" was never more resoundingly apposite!).  As Reg again notes in the liner, however, it wasn't Bobby who proved to be the major influence on Seán's fiddle-playing (Seán indeed reckons that his father only actually heard him play two or three times), but house-guests such as Tony Linnane and Brendan Mulkere (the Clare influence gets even stronger).

However, as a teenager Seán turned to the mandolin and the tenor banjo, playing sessions with Tommy McCarthy and other older musicians including Raymond Roland and John Bowe while a later spell in Dublin saw him play regularly with fiddlers James Kelly and Conor Tully.  Back in London from the mid-1980s, Seán has played in all sorts of bands and can be regularly found at the Porterhouse's Sunday afternoon session in Covent Garden and many others.  The turning point fiddle-wise, however, came in 1986 when banjo player Dermot Kearney asked Seán to step into the ailing Jimmy Power's shoes at the regular Sunday lunchtime session at the Victoria (now demolished) on Holloway Road) and he's being going strong on the fiddle first and foremost ever since.

Dermot Kearney was responsible for the Bow Hand album, Danny Meehan's Navvy on the Shore, and persuaded Seán to record The Porthole of the Kelp.  It was recorded direct to DAT in guitarist and bouzouki player's Paddy Gallagher's living room in Cricklewood with the addition of Pete Quinn playing keyboard on some tracks.  Therefore, the sound quality is not as good as a straightforward commercial release (though, as Pete told me, they'd never have persuaded Seán to enter a studio), but the fact that many of the tracks were recorded in one take means that there's a fundamental live feel to the album which many a studio release obviously lacks.

Having seen Seán play on numerous occasions, I've always been impressed by the sheer imagination of his music and the stylistic individuality of his sound.  Listen to the jig The Pipe on the Hob and you'll hear a musician who bears all the influences of his upbringing using them as a launch-pad for his own exploration of the tune.  The soulfulness of his music is, of course, strongly reminiscent of his father, but there's equally a sense of daring here as if Seán is challenging his own versatility to take him into uncharted waters.  That's not to say that Seán is London's answer to Martin Hayes (and he's far too self-effacing to even consider the comparison), but his playing of a reel such as Pol Ha'penny takes the listener on a journey which incorporates such delightful enterprise that demanding a return trip is inevitable.  The problem (though it's not one) is that Seán never plays a tune the same way twice, so this album is very much a one-off in all senses of the term.

If anyone fears by this that the man is prone to over-elaboration or excess ornamentation, then cast those concerns aside for Seán is far too rooted in the music to countenance such enormities.  The Porthole is simply one hell of a fiddle player doing precisely what comes naturally!  (It is suggested, however, that those of a nervous disposition do not look too closely at the CD itself which, thanks to the position of its central hole, appears to show Seán shot through the head.) 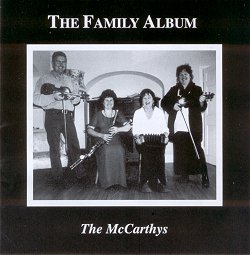 The last CD in this review, The McCarthys' Family Album, is not strictly a London-Irish release since the four children have long left the city and their former Harringey home where they were raised by Tommy and Kathleen McCarthy.  However, the McCarthy family had such pivotal involvement in London's Irish music that it's impossible not to realize the connections.  Their late father actually appears, playing concertina on The Shyan Hornpipe and The Foxhuntr's, both recorded at his North London home by Séamus MacMathúna for the CCÉ album Bonnie Kate in the 1960s, and again, playing tin whistle, on The Drunken Landlady, recorded in 1985.  The rest of the album, however, sees various combinations of his children Jacqueline (concertina), Marion (uilleann pipes and tin whistle), Bernadette (fiddle and piano) and Tommy Jr (fiddle) and their respective spouses Tommy Keane (flute and fiddle - proving he's not just a consummate piper), Johnny Giles (tin whistle), Henry Benagh (fiddle) and Louise Costello (button accordion).

Graced by a selection of monochrome photographs from the family album plus notes from James Kelly and a brief biography from Jacqueline McCarthy, this is quite simply an utterly gorgeous release and maintains the high standard set by previous albums on the family's Maree Music label.  Again, like They Sailed away from Dublin Bay, it's also exceptionally good value, rolling in at a mere sixty-six or so minutes and a clear example also of quality matching quantity.  Additionally, Tommy Keane's production offers the kind of crystal-clear definition that allows the listener to hear each individual element of the many different personnel combinations that feature.

It's eventually impossible to highlight any particular tracks for your attention as there's simply so much to engross and delight here.  Those who love the effervescent bliss of Jacqueline's concertina playing will be more than satisfied by her appearances here while Bernadette shows herself to be an astonishingly powerful fiddle-player, packing her music with untold degrees of tenderness, charm and sheer brio.  Both Marion and Tommy Junior's solo spots prove them to be talented musicians and the four spouses blend in to splendid effect.

All told, this is a joyous collection of music, a wonderful evocation of their father and the power of the musical tradition and possibly, just possibly, the best Irish traditional album of 2002.