In the latest update at www.thefolkmag.co.uk you can find:

Record No 1 - Version 3, the CD - is now available exclusively from MT some 6 weeks ahead of its launch (see 'A Real English Affair' below).

This superb new edition of the the 1965 classic, with 14 extra tracks and a thick booklet by Reg Hall is a 'must have' purchase for any traditional music lover.  Check out our rave (almost) review in these pages and then order your copy in the usual way - full details on our Records page.  Our price is only £11.00 - inc. p&p.

We've just heard from a company called Snatch'd from Oblivion about a series of re-releases they are producing.  These are all CDs of top quality traditional music which have, nonetheless, been heartlessly deleted by the original issuer and are no longer available anywhere.  They are all accompanied by the original booklet notes, yet are available at the utterly reasonable price of £5.

We are particularly pleased to see that their first release, SFO 001, is the fabulous 'Rice Girls' record Donne della pianura del Po - a CD any lover of harmony singing really needs to own.  I have some available, so just pop a fiver into an envelope together with your postal address, and post it to me at the usual address - I'll do the rest.

An illustrated talk by Reg Hall, Paul Marsh and Steve Roud to begin at 7.30pm.

Refreshments and CDs will be available for purchase

I'm extremely sorry to have to pass on news of the death, on Saturday September 23, of piper and concertina player Tommy McCarthy.  Not only was he a fine player and upholder of his tradition, but also an unfailingly delightful and lovely man who we had the pleasure of knowing, albeit intermittently, for more than 30 years.

Alan O'Leary and Jim Carroll & Pat Mackenzie have just sent in tributes, which I have combined into this Obituary:

Tommy McCarthy of Clare and London

The death has occurred of a much loved Irish traditional musician Tommy McCarthy, Uilleann piper, concertina, whistle and fiddler - he died around midnight on 23/24th of September while on a pilgrimage to Lourdes with his wife, Kathleen.  He had been suffering with cancer for some time.

Tommy was born in 1929, in Shyan, ('home of the fairies') near Kilmihil in West Clare.  His aunt played fiddle, his mother concertina, and sets were danced in their house.  He took interest in the music at the age of 9 after hearing flute player Miko Dick Murphy with the Wrenboys on St Stephen's day.  He learned fiddle from Malachy Marrinan, picked up tunes from local blacksmith and concertina player Solas Lillis, and by the age of fourteen he was visiting Elizabeth Crotty's in Kilrush.  He played at farmhouse dances, 'wrens' and exile wakes, where rhythm and swing were critical to the sets danced.  He learned much of his music from his neighbour Mick 'Stack' Ryan who taught Tommy to play the concertina.  Michael Downes, Junior Crehan and Bobby Casey were some of the musicians he played with in Clare.  Staying in Dublin once weekly introduced him to John Kelly, through whom he was directed to the legendary piper and maker, Leo Rowsome, to purchase his first set of uilleann pipes and received his first lessons in 1950.

In 1952, Tommy and his wife, the dancer Kathleen Connaughton, emigrated to London where he worked as a carpenter.  He soon joined the great musical melting pot which was London at that time, playing with musicians from every corner of Ireland. 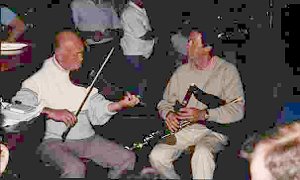 To mention but a few; pipers Seamus Ennis, Willie Clancy and Michael Falsy, fluteplayers, Roger Sherlock and Paddy Taylor, accordionists, Raymond Roland and John Bowe, and fiddlers Martin Byrnes, and Bobby Casey, with whom Tommy built up a great friendship - during the 60s and 70s they were inseparable.

Tommy joined NPU (Na Piobairi Uilleann) in 1968, co-founded the London Pipers Club in 1980 (still thriving), played on CCE's (Comhaltas) first American tour in 1972 with Paddy Glackin, Seamus Connolly and Joe Burke.  He also loved playing in folk clubs and he was much loved on the British folk club scene where he played many times with his family or with Bobby Casey, charming audiences with his gentle humour and understated presentation.

Tommy remained in London for nearly 40 years and greatly enriched the lives of the Irish community during that time, not only with his music, but his gentle personality and humanity.  During that time Tommy and his wife Kathleen from (of Glenamaddy, Co Galway), passed on their musical talents to their entire family; their three daughters, Jacqueline, (concertina), Bernadette, (fiddle/piano), Marion, (whistle/uilleann pipes) - all of whom married musicians and have moved back to Ireland to live.  Tommy jnr (fiddle) has become the owner of a very successful music bar in Boston.

Tommy and Kathleen moved back to join their daughters in 1991, settling in the West Clare town of Miltown Malbay, birthplace of the great piper, Willie Clancy.  Tommy taught concertina at the annual Willie Clancy Summer School and regularly performed with the family at the concerts held there.  One year Tommy played in three specialised music recitals at the school, playing Uilleann pipes, concertina and tin whistle.  I [Alan] was fortunate to be at the last piping recital Tommy gave in Miltown - it will stay in the memory for a long time.

Tommy McCarthy's music has embraced diverse challenges, such as playing in the film score for Young Guns, with Jacqueline in Three Wishes for Jamie, with all of the children with The Chieftains.  His music took him to many parts of the world, touring with CCE, the Ballet Rambert and the National Theatre.  He regularly visited the USA, and also performed in Brittany, Italy, Switzerland, Bulgaria and Australia.  Tommy himself made a solo album, Sporting Nell, in 1997.

They say a man is measured by what he leaves behind him - in Tommy's case we are all better for his having been here.  The memories of his lovely music and character, and the knowledge that all of those great gifts have been passed on in abundance to his wonderful family.  We are much blessed, and have much to be thankful for, through having known a person like Tommy McCarthy.

The Road from Connemara is another of Topic's lavish VotP-style productions - two 70+ minute CDs and a 60-page booklet housed in a super-sized case.  A 12-page biographical note by Liam Mac Con Iomaire, a 6-page introduction by Fred McCormick and recollections from Peggy Seeger all complement the complete song texts in English and Gaelic (with English translations) and transcriptions of the 'actuality' excerpts from the 1964 interviews.

Since it has been decided that the Topic/CIC release of this MT production will not now take place until November - and since we have had it ready for five months and have widely advertised its availability in September - it has been agreed that we should begin to sell it as advertised.  Accordingly, it is now available from the MT address and full details appear on the Records page.

The price is £16 (the same as Topic's), but ours includes UK p&p.  I urge you to fill in our Order Form and drop me a cheque right away!

Everybody welcome to attend

The Making of Irish Music - course:

Fred McCormick presents another music course for the Continuing Education Department of Liverpool University.  It will run for ten weeks from Monday 2nd October, from 7 to 9pm, at the Centre for Continuing Education, 126 Mount Pleasant, Liverpool.  Phone 0151 794 6900/6952, for further information.  Course code 00L V004-517.  Students can either enrol in advance or just turn up on the night.

Music, song and dance are part of the success story of contemporary Ireland.  From concert hall to session pub, from street busker to record studio, the many forms of Irish entertainment mirror the changing character of Ireland, and its growth as a modern nation.  What the music and the songs are about - and the part they play in Irish life - is what this course is about.

No qualifications or previous knowledge are required, and all are welcome.

Announcement and call for papers

This year our one-day conference will be hosted by the International Music section of the British Library National Sound Archive.  It will be held in the Conference Centre on the main British Library site on Euston Road from 10.00 to 16.45.

Theme: The annual BFE conference at Sheffield this year focused our minds on what, how, why and where we do fieldwork, ethnography and representation.  This one-day event narrows the scope to consider the place of recordings in particular - the primary artefacts ethnomusicologists collect during fieldwork - and of archives - the "ethnomusicological museum".  Papers will consider issues such as: appropriate equipment and media for making recordings, legal and ethical considerations, reasons for archiving, reasons for not archiving, the limitations of archives, the importance of documentation, methods of and reasons for dissemination (CDs, CD-ROMs, radio, the Internet), technological and commercial impacts, the use of existing recordings as source material in ethnomusicological study - the archive as the field.

Six to eight papers will be accepted.  Duration of each paper: 20 minutes maximum, allowing 10 minutes for questions.  In addition, we are inviting suggestions for shorter presentations (up to 10 minutes) on any issue relating to archiving.  This might be an opportunity to ask questions, make suggestions, and raise complaints about the role of archives in ethnomusicology generally.

Conference fee: £15 (£10 for students and unwaged).  Non-members will be enrolled as members of the BFE at the appropriate rate.  Tea and coffee will be provided.  There will be a 60 minute lunch break with the possibility of eating at nearby restaurants or at the British Library restaurant or canteen.

The British Forum for Ethnomusicology is the UK National Committee of the International Council for Traditional Music.

Registration: The number of places is restricted to 50.  Please register early through Dr Janet Topp Fargion at the address above, giving your:

The Digital Tradition on CD

The Digital Tradition is a database of over 8000 songs.  It is a searchable database with playable tunes for 3500 of the songs.  You can download it from the internet (look for it at the Mudcat Cafe - http://www.mudcatcafe.com)

If you don't have access to the internet, or if you want to save what can be a long down load time the it is now available on CD - contact Bob Blair at bob_blair@pop3.colloquium.co.uk  The latest version on CD covers both PC and Macintosh operating systems.

The CD is freeware and is copy-encouraged.  The charge for the CD is to cover duplicating and postage costs.  Any surplus that accrues will be remitted to the Digital Tradition to help with its costs.

The Festival of Village Carols

All those who make the annual pilgrimage to the Inishowen Seminar of Traditional Song will be deeply saddened to hear of the death of Moira McBride, wife of the organiser, Jimmy McBride.  Moira had been ill for some time, and was receiving treatment in Dublin.  However, until recently, there was every reason to hope that she would make a full recovery.

Although never a central figure in the proceedings at Inishowen, she was always ebulliently there in the background, and added greatly to the warmth of the proceedings by sheer dint of personality.  There are many like me, who will always feel grateful for the wonderful hospitality which the McBrides showed to visitors, and many who feel that Inishowen will never be the same without her.

The guests who will be appearing at this event will include:

Local singers will Include:
Details of the event on the website at: http://www.users.globalnet.co.uk/~tinvic/corsica

I've just been sent the Autumn Term Events Bulletin for the above Institute.  Covering lectures and seminars on Australian, Canadian, Caribbean, Commonwealth, Southern African, Gender, Human Rights and Multiculturalism issues, it appears to offer a fascinating programme of events.

While music, as such, is only center-stage in a minority of them (John Cowley is on Monday 16th October, 4:00-6:30), I'm sure many readers would find a great deal else to interest them.

This Events Bulletin is available from: