of the West Riding

Over the years the West Riding of Yorkshire has become a noted breeding ground for skillful brass bands, but at one time more numerous were the Tommy Talker Bands springing entirely from working class roots.

This type of band went under various names: Waffen Fuffen (with several variants such as Wiffan Waffen Wuffer, Wiffam Wuffem and in some areas Faff and Fuffen), Bladderheaded Bands, comic bands and Tommy Talker Bands. 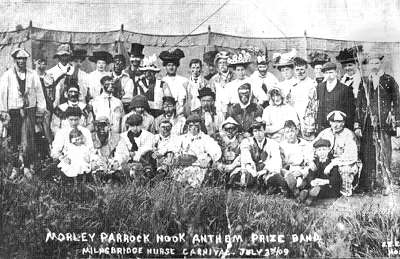 They came into prominence during the Twenties and Thirties and generally used simple, homemade instruments as money was not available for anything better.

In explaining the bands' names the term 'Waffen Fuffen' is included in 'The Dialect of the Huddersfield District' by W E Haigh and published in 1928.  'This band is a local, broadly humorous modern imitation of the medieval band of waifs, strays and outcasts who infested the countryside in former times and gave great trouble to the law.  They are composed of youths calling themselves 'Waffen Fuffen Uns' (i.e.  lost and beaten ones, or down and outers).  They dressed themselves up in ragged clothes for some frolicsome occasion and carry old kettles, pans and whistles, which they rattled and tootled in accompaniment to their antics as they marched from village to village, usually collecting money.  The Waffen Fuffen bands were connected with the rush bearing custom in Yorkshire.  John Sykes in 'Slawit in the Sixties' writes of 'Waffin Fuffin bands led by screeching flageolets and drums of varied deadness at the local feast of Sangamis' (the Sangamis being the rush bearing ceremony in Slaithwaite).  Records show the rushbearing dates back to at least the beginning of the eighteenth century but did not generally survive as long as the bands.  An account of the last Scholes cart (1770), lead by an old drummer called Marlborough states that bands of music were not common in Scholes before the termination of the French War of 1816.

James Burnley in 'West Riding Sketches' (1875) talks of when bletherhead time came round.  'The locals eschewed all minor amusements and united in a grand bletherhead carnival'.  Burnley explains 'bletherhead as signifying emptyhead or noodle, and that blether is Yorkshire for bladder.  Roy Mason from Silsden confirms this: 'a blether is a local term for an empty pig's bladder, thus the name actually means 'the empty headed band''.  A band in Baildon was formed in 1857 called The Bleatherhead Band which was still going in 1871 when they featured in Baildon Annual Gipsy Festivals.  Bingley Bleatherhead Band are mentioned in the Bradford Observer in the same year.

The chief role of these comic bands was to lead the processions for the carnivals and galas held during the Summer months.  As the carnivals restarted after the First World War competitions between the bands became popular.  Before this date gifts and cups had occasionally been awarded but now the attraction of cash prizes heralded a peak period.

Some bands were formed solely to promote their own carnival while others appeared in competitions throughout Yorkshire.  Dress usually consisted of comic uniforms or fancy dress.  Individual members would portray characters such as a Zulu warrior or Red Indian and clown and pierrot costumes were particularly popular.  Contemporary movie favourites also had an influence - many a band featured a 'Charlie' (Charlie Chaplin impersonator) or a 'Mother Riley' while The Holbeck Jungle Band were all dressed as wild animals.  Each carnival had its 'fools' to collect money - usually solo artists who also took part in the fancy dress competitions.

Several bands were formed by working men's associations especially around the Spen Valley where keen rivalry existed between the clubs.  Many veterans of the Great War formed bands while others were organised by the unemployed. 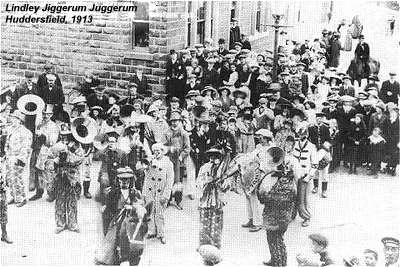 Amongst these were The Skipton Discharged Soldiers and Sailors, Horsforth Dole Band, The Wakefield Unemployed Association and The Seven Days Rest Society Band.

During the research for this article many informants referred to these groups as 'jazz bands'.  Some carnivals indeed ran a Jazz Band competition.  Skipton Carnival ran two competitions - one for comic and one for Jazz.  These Jazz bands often featured instruments such as accordions and concertinas which were disallowed from the comic competitions but as many bands entered both contests there was probably little musical difference between the two.  Although groups such as The Saltaire Jazz Band and Prince Regent's Jazz Band used the term, 'Jazz' was only a loose, fashionable description for any band not conforming to a definite style e.g. brass or military.  Elizabeth Bird in her research in the North East confirmed that no such band in that area played Jazz in the accepted sense of the word.

'The Death of Nelson' was a popular number and many teams had it in their repertoire.  According to the account book of The Crown Street Band (Bradford) their programme for 1936 consisted of:


Among other numbers the Band featured were Poor Old Joe, Little Man, Covered Wagon, Blaze Away, Prince of Wales, The Stein Song and Tramp, Tramp, Tramp.

Simple sketches included 'The Barber of Seville', where a large imitation razor was used to shave a lathered band member and, for 'Flying Trapeze', an imitation swing dangled over a bath of cold water.  Doctor Mac's Band from Wyke did a play to the tune of Who Killed Cock Robin climaxing with the conductor falling to the ground as if shot.  A stretcher of brown paper was hurriedly brought forth and a Union Jack draped over 'the corpse'.  After the obvious consequences the conductor would walk off to his own funeral.  The Hunslet Nanny Goats material consisted mainly of marches like Belfiga and Old Comrades.  The Paddock Silver Piggin Band had a character called Jack Whitehead who raised large sums of money by means of well practised tricks, often performed with the aid of a well trained mongrel.  Jack would drop the dog down the front of his baggy pants and pretend to shoot the animal which then rolled out through his trouser 'slops' and acted dead on the ground.  The Rose and Crown Band from Slaithwaite introduced a real horse into their procession.  According to ex-member Harry Walker the trouble began when the horse was put back to work - it had got so used to capering about among the crowds.

Whitwood Mere Band from Castleford featured among their material Men of Harlech, Sailor Beware and Cock of the North and their performance climaxed when a telegraph pole decorated with fireworks was set alight.  The Parrock Nook Anthem Band excelled at anthems available from the 'Service of Songs' chap books and marches such as Georgia, Lee Fair Anthem, a comic John Browns Body and a tearjerker If I Should See a Little Soldier Marching as to War.

The main instrument in all bands was the Tommy Talker - today referred to as a Kazoo, an American colloquialism first used in Britain by the Mound City Blowers on a provincial tour in 1925.  However of the fifty or so ex-band members I have interviewed virtually all used the term Tommy Talker.  It appears to be a distinctly Yorkshire expression: in the North East it was called a bazooka, gazooka or just plain hooter, and members of the Widnes Novelty Band from Lancashire (see Traditional Music No 7) refer to a gazoota or submarine (the instrument's shape).  The term Tommy Talker probably dates back to the First World War when it was used to make communication signals in the trenches.

Bob Schofield in his article 'The Waffen Fuffen Bands of the Colne Valley' (EFDSS 1971) states 'often working on the Kazoo as a base, various trumpet or euphonium shaped instruments were made.  Bass instruments were constructed similarly but using a large gramophone horn instead of the funnel.  Watering cans, peggy sticks, rubbing boards and all manner of pots, pans and kettles were used.  'Surprisingly with such instruments it is said that a fair degree of musical precision was achieved and indeed a leader would conduct them as a proper band.

A stipulation of the competition was that all instruments had to be made of tin.  Therefore while concertinas and brass instruments were frequently used in the processions, they were discarded once the bands arrived in the competition ring.  The concertina would however be brought out again if an encore was called for and was also often used for busking on the journey home.  The banning of 'proper' instruments from the ring was presumably designed to keep the professional musician away from the prize money.  However competition was intense between the bands themselves and on several occasions fights would break out between participants when the results were read out.  Lodges of protest and vociferous shouts of advice to the judges were also not uncommon.

The bigger competitions generally attracted six or seven bands and each performed for about a twenty minute spot.  Points were awarded for marching (into the competition ring), for playing (points were deducted if you took the instrument from your mouth), for smartness and for the comic sketch enacted to the band's accompaniment. 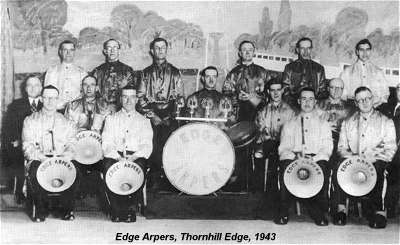 A popular story in Morley concerns The Parrock Nook Band who once lost a competition against Holbeck Jungle Band because in the sketch 'The Death of Nelson', Holbeck's' conductor 'died better'.

A later development within this tradition were 'The Edge Arpers' consisting of, and whose name derived from the wartime ARP (Air Raid Precautions) workers.  Hailing from Thornhill Edge, they were greatly influenced by their musical director F W Peace, a well-known composer, and a large part of their repertoire consisted of 'classical' music.  The Arpers were not a carnival band but played at concerts and clubs such pieces as We three working for the ARP, Lost in the Middle of a Moor (composed by Peace), Drink to Me Only with Thine Eyes (with violin imitations) and for a grand finale Land of Hope and Glory. 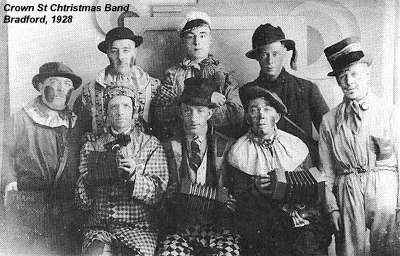 However most bands performed mainly, if not solely, at the carnivals although the more established teams would entertain the whole year round.  Several had smaller Christmas bands, featuring concertina players, and organised tours, for which a licence had to be obtained.

The Depression years of the Thirties however reduced the number of carnivals and competitions being organised and gradually the comic bands began to split up.  Some members of the more accomplished groups extended their musical careers by forming comedy revues and entering the working men's club circuit.  The Second World War put paid to most of the remaining bands and despite a few post-war revivals they eventually became just a memory.

Ronnie Wharton and Arthur Clarke were co-authors of 'The Tommy Talker Bands: The History and Development of a working class entertainment' from which the above article is drawn.   This publication is no longer available, however they can supply a booklet 'The Crown Street Comic Band'.   Write to Ronnie at 132 Upper Woodlands Road, Bradford 8, West Yorkshire.