This percussion instrument - it could be defined as a big version of the pandeireta (frame drum or tambourine) - which was very popular all over Galicia at one time, is now only to be found in very few parts of the region.  The instrument goes back many thousands of years, as it was played in Egypt and Asia Minor and was mentioned in the Bible on several occasions as timpano, the name by which it was also known in Latin, the language which served as a bridge between the original Hebrew and the Latin-based languages of today. 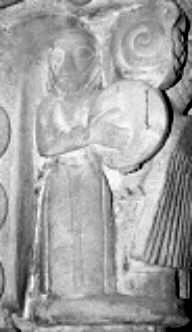 It is widely accepted that the Galician name comes from the Latin pandorius, although, as we have just mentioned, timpano was possibly its original Latin name.  Anyway, it is very difficult to distinguish between the square variety (pandeiro) and the round one (pandeira) when old texts are used in research, as both instruments have been refered to by the same word at different periods of time and parts of the world. 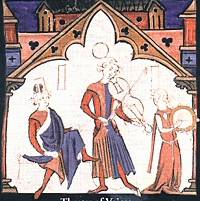 The popularity of the pandeira since the Middle Ages in the north-west of Spain can be seen from the stone carving of a woman playing the pandeira on the capital of a pillar in the church of San Juan de Amandi in Villaviciosa (Asturias), dating from 12th century, or the picture to be found in the 13th century Galician-Portuguese Cancioneiro da Ajuda.

The instrument is simple, consisting of a round frame 40 to 50 cms in diameter, with or without rattles (in Donís they are called cernellas), which has a sheep or goat skin stretched over it, made as if it were a seive or tool for winnowing.  There are several different types: To illustrate the pandeira not now in use, it will be best to refer to the better-known pandeireta.  This is a much more modern instrument, in general use by the middle of the 18th century, whose name comes from the same root as pandera.  It is smaller in size, and was already known in Spain during the Renaissance under the name of panderete, panderillo and pandero pequeńo.

On many occasions it is difficult to tell if an instrument is in fact a large pandeireta or a small pandeira, on account of the many intermediate sizes which exist.  In such a case, it can be said that the difference goes beyond the question of size and depends rather on the way of playing.  The pandeira is played by holding it steady and beating it with the hand, in what could be called the vello xeito (old way), while in the case of the pandeireta the instrument is moved until it strikes the hand, in what we might also call the xeito novo (new way).

The older means of playing, the vello xeito, originally involved both hands: the left held the instrument and at the same time beat with the fingers, while the right struck freely.  At a later stage in its evolution, the left hand only held the pandeira, while the right was used to strike it. 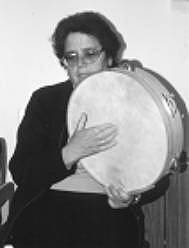 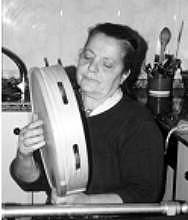 I said earlier that the instrument is now only to be found in very few parts of the region.  One of them is the parish of Donís, belonging to the Cervantes municipality, near the Os Ancares mountains, where we can find Inés López, born in Piornedo but who has lived in Donís ever since she married, and Aurelia Gómez, who comes from Moreira, although she now lives in Villaver.

Many tales could be told of the pandeira in Donís, since, although today it goes unnoticed, it is a deeply-rooted instrument whose presence is intense in traditional music.  Weddings were occasions on which the pandeira was used to accompany song and dance, together with other gatherings when young people came together in villages in the '40s to enjoy themselves at the polavilas, fiadas, magostos or other festivities which were organized for them.

The pandeira is an instrument which has always been played to accompany song, and to give the beat for dancing.  This has been so in western lands over thousands of years, and, as we can see, is still so in Donís (Moreira, Piornedo, Donís), in Cervantes in general, and in other villages in the Os Ancares region where the pandeira is also played, such as Suárbol and Balouta de Candín (León), Murias de Rao and Coro de Navia de Suarna.  The typical dance rhythms are the molińeira or muińeira, depending on the area, the pasodoble and the jota, together with a few others of a more local importance, such as the agarrado (which is played and danced in different ways according to the area) and the tarán tan tan or balán tan tan (a sort of rumba played in the villages belonging to the parish of Donís).

The root pandeir- applied to a musical instrument, as well as other forms derived from it (pandeira and pandeireta) may well have a Spanish origin, although at the same time pand- comes from the Latin root and has to do with curved or round.  This idea is based on the fact that, although the instrument is to be found in other parts of the world, it is only known thus in Spain and Portugal.  The exception is the Moroccan form bandaír and the Algerian bendir and bandayir, although these have been shown to be of Spanish origin.  In other parts of Europe, other names are common, most of them deriving from the tamb- form, such as tamburin in French, tamborino in Italian, tambourine in English and tabourin in German.  In other parts of Spain it is called pandero, in the masculine form, although it is dying out also, although it was once just as well known and loved as in Galicia.

The Galician form of the word, with its feminine ending, appears later than the masculine pandeiro (which was also applied in Galicia to the pandeira at certain periods), which must be because from the Middle Ages onwards, the masculine form was used for the square type too (which was named, and should really still be named, adufe).  In this way, a certain amount of confusion has sprung up as to names and instruments.  As the pandeireta became more popular, the new derivation must have developed in Galicia and the bordering areas such as the old Kingdom of Leon and Asturias.

(Many thanks to Helen Baines for the translation to English)

Galician version of this article can be found on Juanjo's homepage: http://www.agaitadofol.com, and a Spanish version on http://www.rebec.info