A St Lucian fiddler in London

August 1985: I'm sitting in the bar at the Commonwealth Institute in Kensington, West London.  It is the intermission of arguably the dullest film on music I have ever had to endure.  As the audience begins to drift back for the second half I become aware of three West Indian security guards having a noisy, good-humoured debate with the two Irish barmen.

As they all seem to be having a better time than I am, I decide to skip the film and get chatting with them.  As often happens, my interest in music slips into the conversation and I find that it is shared by one of the guards.  I ask him if he plays at all.

Three weeks later, Peta Webb and I were welcomed into Joe McLawrence's comfortable house in Kilburn and the following story emerged.

Joe was born about 1930 on the island of St Lucia in the eastern Caribbean.  Brought up in the country district of Suisaya, he moved with his family to the small town of Roseaux in 1940 and around this time began to take an interest in music.  Although his father was not musical, his elder brother Edward took lessons on the violin from two local music teachers, 'Baby' Alfonse and a Mr.  Rogers.  (Both were well-known musicians in the area; Rogers is now dead and Alfonse has returned to French Guyana from where his family originated.) It was from Edward that Joe learned most, and by the age of twelve or thirteen he had joined his brother's band - two fiddles, guitar, banjo and maracas - to play for local dances.

These dances took place in a 'rum shop' or small hall and would frequently last from Saturday night to the early hours of Monday morning.  Although couple dances were common it was the quadrille that dominated these functions.  A popular dance in the Caribbean, the quadrille originated in the nineteenth century on the plantations, where the slaves copied the owners' and overseers' attempts at the fashionable dances of the day - the polka, the waltz, the lancers etc - but modified them to an African pattern with a more intensive rhythm.

The Quadrille set (locally 'falls') consists of seven separate dances - a mix of polkas, schottisches and mazurkas (locally masoucs) and the dancers, four men and four women in each set, would pay a few coppers to participate in each.  As each of the seven dances would last between ten and fifteen minutes and up to one hundred dancers would often turn up, the musicians were kept extremely busy; frequently two sets of musicians were needed for a weekend dance.  Joe's band occasionally alternated with one led by his mother's cousin, a fiddler by the name of Coffin (in his day possibly the island's most famous musician and mentioned to me several times by other St Lucian musicians resident in London). 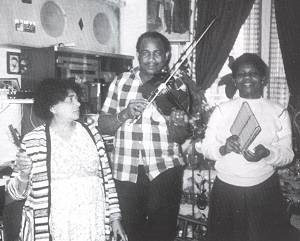 Joe recalls that although none of the European residents of the island - mainly French and British - played music, they were frequently invited to the dances:

"We all mixed in well, but on Monday, everyone knew their job."

In the same year Joe decided to leave St Lucia and his violin behind and come to England in search of work.  Following various jobs with the Grosvenor Hotel, Lyon's Comer House, in the building trade and as a mechanic, Joe became a Gallery Attendant at the Commonwealth Institute in 1970.  It was there that, in 1985, at a friend's leaving party, on a borrowed violin, he amazed his colleagues with a performance of St Lucian dance music.  'None of them had a clue that I played - I'd worked there 15 years and, well, they were surprised!'

By the time of our visit Joe had bought a new violin and had played a couple more times for friends.  But for a man who had barely touched a fiddle in twenty-five years, Joe's performance that Saturday afternoon was simply astounding.

Firmly in the island's distinctive style, Joe's playing is rhythmically very complex.  He uses a variety of decorative techniques - notably finger slides, double stopping for emphasis at the end of phrases, sobbing effects and free time - all designed to enhance and propel the tune above the usual St Lucian band accompaniment of guitar, banjo and maracas.

In addition to the seven figures of the quadrille set, Joe also played other local dance tunes, including one he called The Sailor's Polka.  He also plays popular waltzes, such as Maria Elena, Calypso tunes of the 1950s such as Brownskin Girl and Mighty Sparrow's London Bridge is Falling Down, UB40's Red Red Wine, and a stunning version of Jim Reeves' He'll Have to Go.  As we were about to leave, he called us back for a finale, Now is the Hour.

Joe hopes to continue with his musical activities and is planning to put together a quadrille dance group from among other ex-islanders for a Commonwealth Institute function.  Be sure that I shall report on developments.

We went to St Lucia in 1995 and heard, far too briefly, another Kwadril or Chak-Chak band [photo above] led by Keton Flook [fiddle], which was slightly rougher, and far more exciting, than the 'Rameau' Poleon band's music on Smithsonian Folkways CD SF40416.  They let us have an apallingly recorded tape which really does not do justice to what we heard of their live playing.

The only commercial recording we could find was of the Poleon band [augmented to eight players], and this is very enjoyable indeed.  Given the difficulty we had in getting it in St Lucia [we tried every record shop in the north of the island], I can't imagine that it's available in the UK.  But, for anyone with contacts there, the cassette is: Sweet Sounds of St Lucia, 'Rameau' Joseph Poleon and band, Dave Samuels Promotions DSP K002