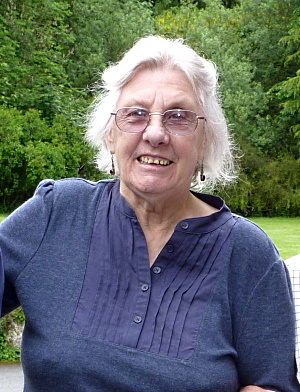 Sheila's mum told her she had been born in 'North Worcestershire', her posh way of saying 'South Black Country'.  Dad was a tool-maker, a craft admired by all engineers.  Sheila was their only child.  The war effort sent him to Chichester on the south coast, where Sheila did well at school.  She continued studies to qualify as a librarian.  Dad was proud, but mum worried, when Sheila took a post as assistant librarian at Dorchester.

In Dorset, she met Daphne, and they went out together to folk clubs and dances all over the county.  Sheila found she easily remembered the steps and figures of dances, and became a guest caller at local ceilidhs.  In working her way up the library service, she also, piecemeal, shifted north, back to the Black Country and then to Wellington in Shropshire.  All this time, her reputation as a caller grew.

She met Bill Rutter and became involved in converting the grounds of Halsway Manor from a bramble wilderness to today's gracious gardens.  As one of "Bill's Babes", she also helped to establish Sidmouth as England's foremost folk festival.

She bought a house in Wellington, and carried on living there after her work was transferred to the County Library in Shrewsbury.  Despite the responsibilities of her post, she gave all her spare energy and time to folk dancing, including the morris.  She danced out with Shrewsbury Lasses for many years, and was a regular caller for many local clubs and bands.  For a long time she was the favourite caller at the fortnightly public ceilidhs run by the Peeping Tom band in Coventry.  These were tremendous nights: a big, airy hall packed with dancers of all ages, filled with punchy music and squeals of delight.  And supervising the pandemonium was Sheila, pulling out American contras, jigs, reels, hornpipes, Playford numbers and novelty dances.  With a grin on her face and a pint of beer in her hand.  Majestic and magical.

At festivals, she hosted callers' workshops, passing on all she could to the following crop of callers, ever generous and encouraging.

Sheila also had a talent for organising.  Near Wellington, she helped found an event called All Around the Wrekin, largely aimed at youngsters.  She was on the committee when Bridgnorth festival was started (this later migrated to Shrewsbury).  For a decade or so, as Director of Dance at Sidmouth, she booked the morris, dance bands and callers.  Warwick and Bromyard used her in similar fashion.

Playing in the band behind Sheila was always a good night out - often a hoot.  'Shi-Shi' took a ribbing with the best, all the while keeping the dance flowing.

Even at home, the energy flowed.  Sheila started and built up Shreds and Patches, a magazine aimed at Shropshire and surrounds, covering all things folky.  We ended up with over 700 subscribers.  Initially, the Post Office would take our envelopes, sorted by weight, and frank them.  Then, one day while it was experimenting with the 'Consignia' moniker, we turned up with our boxes of envelopes, only to be told they couldn't do that any more.  The staff were as mystified as we were.  Sheila wrote out a cheque and sent me round to the Post Office counter, where I caused a memorable flap by asking for £600-worth of second-class stamps.  Sheila had that type of decisive pragmatism (and, I suspect, a vicious streak in her sense of humour, when it came to dealing with bureaucracy).

Bleary-eyed, I turned up the next morning, and over the self-same counter shovelled the self-same envelopes, all now with stamps on them.  I had sent Shi to bed before midnight.

Seven years before the end, Sheila's mobility began to decline.  Through her final lustrum, intellect dwindled.  Sheila had gone.  On the 11th of July, her body failed.

Wednesday, July 22nd was a lovely day.  22 of us braved the Covid restrictions to watch Sheila lowered, all ship-shape and Bristol-fashion, into the earth.  The song she asked for was sung, the fiddle played Da Slockit Light as she had instructed.  It was still a lovely day.

Today, as I write, the world has somehow lost a glint or sparkle.

I treasure the image of Sheila, grinning widely, bouncing round the stage with a mic in one hand and a pint mug in the other.  If the same vision comes to you, take comfort ...

In the coffin I placed, at her right hand, a pint glass tankard, engraved with the EFDSS logo and these words -