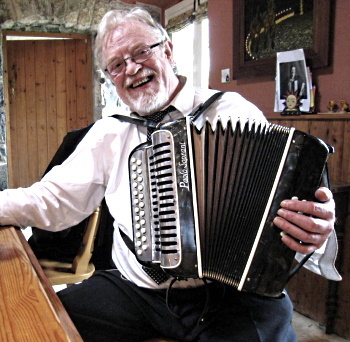 Tony MacMahon, who died on 8 October 2021 aged 82, was a man of many talents and not a few contradictions.  Well known as an accordion player, he was recorded on LP and CD over a period spanning nearly 50 years.  He was also a highly respected radio and TV producer and presenter responsible for bringing traditional music to a wide audience both in Ireland and further afield.  He said himself that traditional Irish music was not his favourite music and many times declared the accordion a poor vehicle to convey the spirit of the music, yet he caused controversy in the mid 1990s by suggesting the landmark TV series "A River of Sound" gave no place for the authentic traditional solo performer in "this Hiberno-Jazz, scrubbed clean of its roots, ritual and balls!"  He was what the Irish might call contrary, but his blunt honesty, sometimes pushed a little beyond accepted boundaries, prompted real debate and consideration of how traditional music should best build on its history and the styles of playing that have been documented and recorded for over two hundred years.

Born in Ennis, MacMahon was exposed to music from an early age.  The renowned accordion player Joe Cooley was a regular visitor to the family home and left his accordion at the house.  MacMahon made good progress on the box in his teens and came into contact with many of the older players in Dublin in the late '50s when he moved there to do his teacher training.  In 1963 he was in New York sharing a flat with Seamus Ennis who coached MacMahon in slow air playing.  By 1966 he was in France and Morocco busking.  He'd paused en-route in London and one track of his playing was included on the Paddy in the Smoke LP.

On his return to Ireland in 1969 he found work at RTE initially as a freelance, later as producer and presenter of the TV programmes Bring down the Lamp, The Pure Drop and others, and established the Long Note programme on radio.  His foresight in ensuring that all the recordings for these programmes were kept in the RTE archive meant that a wealth of historic recordings have been preserved for future generations.  Indeed Nicolas Carolan's Come West along the Road TV programmes, which MacMahon produced, and the resulting DVDs have showcased many of the musicians recorded by MacMahon.

In 1972 he made his first record for Gael Linn records.  Playing a wide selection of tunes on solo accordion including four slow airs, MacMahon's wonderful style and sense of good taste is still a benchmark today.  His use of the left hand bass notes as drone mimics the uilleann pipes, as do his chords - especially in his air playing.  His ability to set a mood by varying the volume was unique to his playing at that time.  There's an exuberance in his reel and jig playing tinged with the sadness in the minor notes he introduces that has characterised his playing throughout his life.  He may not have liked the accordion but he excelled in proving it was as capable as any instrument to express the geantrai, goltrai and sualtrai of Irish music – music to make you smile, weep or sleep.

In 1985 he recorded a live LP with dancers at Dan O'Connell's pub in Knocknagree that captures the sheer joy and excitement that MacMahon, in duet with concertina master Noel Hill, could generate as musicians and dancers drive each other to greater height to the obvious delight of the on-lookers in the bar.  The atmosphere reminds us of that captured by MacMahon when he recorded Joe Cooley in 1973 just weeks before Cooley died.  That recording ended up on an LP simply titled Cooley.

MacMahon and Hill reprised the duet recording in more formal surroundings on Aislingi Cheoil in 1993 again including dancers but also with sean-nos singing from Iarla O'Lionaird.  In 2000 he released a retrospective CD featuring a selection of recordings made solo and in duet over a period from 1967 to 2000.  With his health deteriorating, he released two final CDs, one of dance tunes, the other of slow airs recorded live in 2005 and 2009.  All these recordings have been reviewed over the years on this website.

Tony MacMahon, through his own music and the music he championed through numerous TV and radio programmes, demonstrated that the honest, simple approach of solo and small ensemble playing that had endured from pre-famine days needed no development or change to be fit for the 21st century.  His honesty and faith in the heritage of Irish traditional music has been an inspiration to many musicians that he encouraged directly or through his broadcasting and playing.  We'd like to think when hearing young musicians such as Sorcha Costello, Conor Connolly and Padraic Keane that MacMahon had the stronger argument in that debate in the 1990s.

>A very moving memorial held on Sunday 17 October 2021 at the Unitarian Church, St. Stephen's Green has been made available by ITMA on Youtube at https://youtu.be/g6aLwEjzG6g and A Tribute to Tony MacMahon held in 2019 as part of the Willie Clancy Sumer School is also available at https://www.youtube.com/watch?v=5nlXLzf2uKc&fbclid=IwAR2L3amX7CfnVdFvTXyKiNBk7NOs_QR6duicl2u8gf5dADh-20sEpNOcJLo

Our sympathies go to his family, friends, and all who knew and loved the man and his music.  We'll not see his like again.