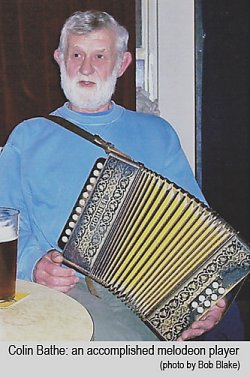 Colin Bathe, a musician who for half a century deftly positioned himself astride the faultline separating self-conscious revival from survivals of authentic tradition, died on 8 May 2011 at his native Swindon, aged 73.

If there is more to a man than his music, as Fred Jordan once retorted to Mike Yates, there was certainly more to Colin than his prowess as singer, dancer and melodeon player.  By the time of his death, he had many extra-musical achievements to his name.  He had, in youth and early manhood, been a sportsman: a useful middle-distance runner; a naturally strong swimmer; and, on the football field, the strong man of defence who understood that it was the first tackle that counted (a precept to which he was known to adhere off the pitch as well as on it).  Occupationally, the tidiness of his mind took him from accounts through functional computer programming to senior management.  Latterly, a fondness reaching back into the 1950s for Italian scooters caused him to build up considerable expertise in early shaft-drive Lambrettas, evidenced in a dozen faultless restorations.  By his own admission never much of a linguist, he none the less attained fluency in the lingua franca of this singular enthusiasm, and prized highly the acceptance he eventually gained among the tribal Lambrettisti of post-industrial Lombardy.  And, not least, he had for half a century and more provided for his family - wife, children and grandchildren - as much with wise counsel as with material support.

Yet, in capital respects, Colin's appreciation of, and participation in, ethnic music-making in the British Isles did define what he was about as a person.  The chance discovery, in its earliest days, of what was to become Swindon Folksingers' Club encouraged him to develop his particular musical gift, initially as singer and guitarist, and later as melodeon player performing simple but highly controlled dance music.  As a concomitant to performance, he progressively assembled a sizeable collection of sound recordings, including a significant number of 78s sifted from dusty piles of discs in the corners of junk shops.  These holdings, ranging from early Scottish accordeon players to West of Ireland ceili bands via the less polished rustic musicians of England, enabled him to acquire not merely musical content but a whole mode of articulation peculiar to the traditional musicians of an earlier period.  He could savour, and within his limits reproduce, the clean, unforced phrasing of echt country music-making, a capacity rarer than might be supposed among those formed in the urban revival.

Although Colin always acknowledged the debt he owed to Swindon Folksingers' Club for arousing his interest in this music, his ideas on the subject developed rapidly, and by the late 1960s he had come to despise the revival and its convenience label 'folk', preferring instead to speak of traditional music, by which he understood a form of unschooled rural music-making that is distinctively rough at the edges but graced by rhythmic nuances to those with ears to hear them.  Traces of this dying idiom could at that time still be found in the locality if you looked hard enough.  Colin always had an especial affection for the (former) Bricklayers Arms at Longcot in the Vale of White Horse, a rustic mecca of beer straight from the barrel, down-to-earth locals and a Saturday night sing-song far removed from the affectations of folk revival gatherings. 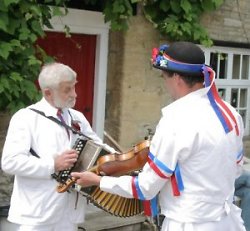 But it was, most of all, at Bampton that Colin found his corner of Arcady.  From the very moment of encounter in the mid-60s, he knew he had found what he was looking for: a rare survival of traditional morris dancing, but also pub music and a social dimension he wanted to be part of.  He formed friendships among the villagers with regular visits, and was honoured to be invited to join the team's one-off tour of southern Ireland in 1968. The longed-for invitation to take part came, in the event, from an unexpected quarter.  When Arnold Woodley, representing a distinct strand of the Bampton tradition, revived a team during the winter of 1969-70, he was short of a dancer.  Colin's athletic build and sensitivity to tradition made him an ideal choice to fill the hole.  He subsequently appeared on Spring Bank Holiday Monday (still known in the village as 'Whitsun'), initially as dancer and later as musician, continuously from 1970 until 2010, an inclusive total of 41 consecutive occasions.  It was a long and happy association.

A significant spin-off from the Bampton encounter was the formation of a barn dance band which eventually took the name 'Morris Eight'.  For ten years and more from 1971, the band played most weeks for community occasions in the village halls of the Upper Thames and sometimes at larger events beyond the district, as well as at house parties and in pub sessions, in the days when unrenovated country hostelries could still be found.  With a typical line-up of two or three fiddles, melodeon and drums, the band acquired valuable experience through the discipline of playing for dancing, a hard school in which the rewards generally outweighed the frustrations.

In the final phase of Colin's life, this musical journey came full circle.  As one of its very few surviving founder members, he was pleased to be able to turn out for the 51st anniversary of Swindon Folksingers' Club on 21 January 2011.  Although he was by then ailing, he rose to the occasion with a characteristically measured rendering of The Butcher and the Parson, a song he had performed with great authority over many decades.  In what proved to be his swan song, he did himself full justice.

Throughout his life, Colin exhibited great powers of discrimination, a consciousness of the need to sift the authentic from the imitation.  This was a principle he applied as much to vintage motor vehicles and to food and drink (he loved strong coffee and beer from the wood) as he did to ethnic music-making.  Furthermore, he was from the outset committed to the social aspect of his interests: he did not just play the match, or perform the tune, or restore the scooter, but engaged with those around him who were similarly involved.  He was, supremely, a clubbable person and a keen talker, qualities which ensure that he will be happily remembered by all who made his acquaintance and enjoyed his company.

If he inclined to dogmatism, he was usually able see the funny side of things; if he enjoyed ruffling a few feathers, he always observed high standards of conduct; if he was unapologetically competitive, he was also capable of considerable gentleness; if he pursued his hobbies single-mindedly, he was not led thereby to neglect his family responsibilities.

Never one to mince his words, he none the less commanded respect for the firmness of his purpose, the clarity of his values.  He would adopt positions which were categorical but firmly founded.  The fortitude he displayed throughout his life did not fail him in the final months of illness: he was unflinching to the end.

Colin Bathe was a proud Swindonian; a committed husband, father and grandfather; and a wholehearted participant in the select activities to which his interest was drawn.

May he rest in peace.